Regional Chaos Makes Israel Seem Like an Island of Stability

Israel, stable and predictable for the first time in many years, worries about the changes and chaos in which its neighbors have been caught up, writes Ben Caspit. 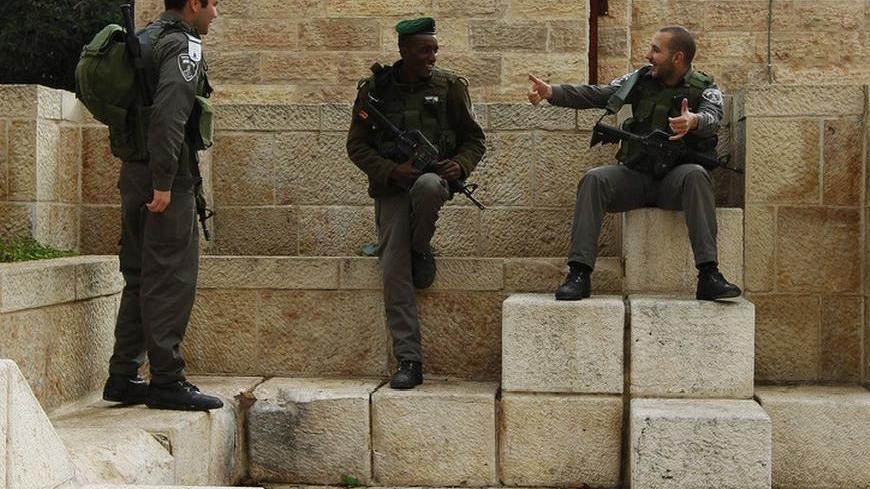 For the first time in ages, an election campaign takes place in Israel, with everyone already knowing what will happen in its wake.

For the first time in eons, the big unknown is not what will happen in Israel but rather what will happen around it — across the rest of the turbulent Middle East. No one knows where Egypt is headed and what the next year or the next day will bring. No one knows the kind of Syria that will emerge, or even whether it will be able to emerge from the ruins, once the time come for Syrian President] Bashar al-Assad to step down — and come it will, soon enough. No one knows whether Jordan, as we know it today, will hold out, and what will become of the Hashemite Kingdom. Ask Military Intelligence, make inquiries with the Mossad, find out with the Ministry of Foreign Affairs, try Europe, the United States or Russia — and you’ll draw a blank. Many tough questions are being asked, but answers are not forthcoming.

For the first time in the chronicles of modern history, Israel is said to be an island of stability in a stormy sea of uncertainty. To date, almost any election campaign in Israel had given rise to a major political shift. Prime ministers came and went. Right-wing prime ministers acted unexpectedly and pursued peace moves, while the left-wing premiers went to war. Governments were elected and voted down. Political reversals, twists and turns abounded. Jerusalem could not be counted on for anything.

One prime minister was assassinated [Yitzhak Rabin in 1995]; another had a stroke and faded away [Ariel Sharon in 2006]; a third was driven out by the judiciary system [Ehud Olmert in 2008]. The earth never stops moving and shaking. Today, it’s the total opposite.

In Israel, it’s same old, same old. Former Foreign Minister Liberman and Prime Minister Benjamin Netanyahu will remain decidedly the same — with or without the ultra-orthodox; it won’t change much from a geopolitical perspective. The leader of the right-wing political party Jewish Home, Naftali Bennett, will pair off votes with Hatnuah party leader Tzipi Livni and chairman of the Yesh Atid party Yair Lapid. Those who are hoping that this concoction will result in some diplomatic process, do so at their own risk.

And around Israel, where stable and enduring rulers reigned for dozens of years, there’s a whirlwind. Dubbed by Israel’s President Shimon Peres as the “regional rock,” former Egyptian President Hosni Mubarak is pent up in a cage. The Muslim Brotherhood has seized control. The liberal opposition is fighting back hard, while Egyptian President Mohamed Morsi clings to the reins, feeling first-hand the limits of power. Anything can happen in Egypt in the coming years.

In Syria, by contrast, anything and everything has already happened. Slowly but surely, Bashar al-Assad reaches the same number of people his father had butchered in the city of Hama in 1982. Some 40,000 to 50,000 people have been killed in Syria, and the numbers keep rising steadily, even though the outcome of this process is clearly irreversible. Assad will ascend to the heavens in a bloody and fiery ending. Will Syria maintain its cohesion, continuing to exist as an integral state? It’s highly doubtful. But if it does, what kind of a Syria will it become? Will it be moderate, pragmatic and close to the West, or rifted, violent and under al-Qaeda influence? Or, in other words, how long will it take us to long for Assad? After all, deep down, many in and outside the region are already pining for the ousted leaders. Longing for Mubarak — that’s obvious, but maybe also for Saddam Hussein or Moammar Gadafi, and others as well. In its Middle Eastern-Islamist version, democracy comes off as a recipe for riots, trouble, extremism and instability.

Where are the days when a person was a man of his word, and a ruler was indeed a ruler? Deals could be clinched, diplomatic arrangements signed, or an orderly war waged. In its stead, we now have chaos.

Former Mossad director Meir Dagan toyed with the idea of setting up a department within his organization that would try to foretell the events in the Arab countries, mainly in terms of regime stability. Dagan dreamt of a situation whereby he would be able to provide Israeli leaders with a real-time warning before this or that regime in the Middle East began unraveling in broad daylight. At that time, this was a formidable challenge. The department was established. No one knows what has become of it. No one was able to predict what has become to be known as the Arab Spring, its intensity and ramifications. Even today, two years later, it still remains unclear what it really is, where it is going, and whether it is here to stay.

Unfortunately, what is clear, however, is that the shakeup passes over the one place where it is needed the most, namely Iran and its protectorates. Even the monarchic regimes remain steadfast, for the time being, some fighting tooth and nail to hang on. In that regard, Assad’s fall should be monitored. On the face of it, his demise should sever the nexus between Tehran and Beirut, isolating the Hezbollah, and perhaps signaling to the Iranian people that change is possible. If Assad — who is backed by hundreds of thousands of trained and armed troops and having his own murderous Basij militia, as well as an unforgivable international forgiveness — eventually came down, even the Ayatollahs cannot remain invincible for all eternity. In this regard, a great deal depends on the international community, the United States, Europe, Russia and China. What has transpired in Syria should be leveraged so as to send a signal to the seekers of democracy and freedom in Iran, that someone in the world lends them an ear and provides a backing in a bid to deliver the masses of Shiites from the crippling effect of the radical clergy.

In Israel, meanwhile, the regional mayhem helps the right wing make the left wing and the peace camp vanish. The opponents of a withdrawal from the Golan Heights are now using the events in Syria to make their case. Had Israel withdrawn from the Golan Heights back in the day, this inferno would have now been raging on the outskirts of the city of Tiberias, on the watershed of Israel’s national lake — the Sea of Galilee.

Even the two-state solution is being divested of its assets. Furtively, a critical mass has been formed between the legislators and the decision makers that do not really believe in this idea and its viability. Surreptitiously, more and more political figures in Israel admit, either openly or secretly, that Jordan is the Palestinian state. The talk we now hear about renewing the idea of a Jordanian-Palestinian confederation further stokes this fire. In the spirit of this idea, the Palestinians in Judea and Samaria will become Jordanian citizens, vote for the Jordanian parliament, and enjoy almost total political and economic freedom, including territorial contiguity in the West Bank. The IDF will maintain presence along the Jordan River; the world will provide international guarantees, and the Middle East will see salvation.

The problem, however, is that at this point, other than the Israel right-wing camp, nobody in the world shares this idea. On the other hand — the Israeli right contends — you have to start somewhere. And construction in the settlements continues.