Israeli Prime Minister Benjamin Netanyahu is both a peacemaker and trouble maker, depending on his political needs. 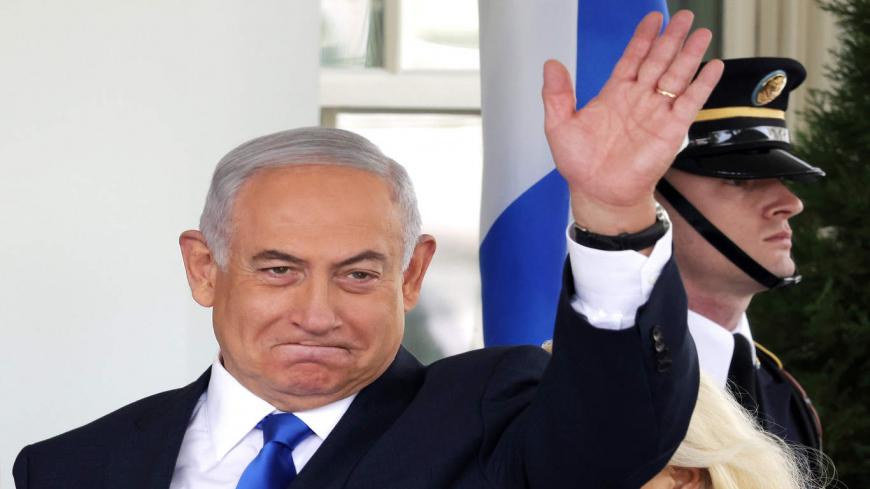 Israeli Prime Minister Benjamin Netanyahu waves as he arrives outside the West Wing of the White House for the signing of the normalization agreements with the United Arab Emirates and Bahrain, Washington, Sept. 15, 2020. - Alex Wong/Getty Images

The historic normalization agreements that Prime Minister Benjamin Netanyahu signed in Washington Sept. 15 bring up again a question that has been asked by many throughout his entire era in power. Is the real Netanyahu a peacemaker or troublemaker? Is Netanyahu a pragmatic, visionary leader striving for peace or the exact opposite — a nationalist, right-wing ideologue determined to block what he views as a dangerous peace process with the Palestinians, constantly circumventing the issue and perpetuating the status quo under which Israel continues to control the territories and sweeps the Palestinian problem under the carpet?

The answer is complex. Since Netanyahu is one of the most perplexing figures in Israeli history, the answer would probably be “both.” If you ask Bill and Hillary Clinton, for example, they would choose the latter option. Netanyahu frustrated President Clinton’s efforts to advance Israeli-Palestinian peace in the 1990s, and did the same to the secretary of state (Hillary Clinton) over a decade later. He holds a world record for going around in circles, covering the same ground, with the clear goal of wasting time, exhausting opponents and getting nowhere.

Put the same question to Netanyahu’s supporters in the political center-right or his opponents on the radical right, and you will hear a completely different answer. Netanyahu is not a true ideologue, he is not bound heart and soul to the land of his biblical forefather, he has never built a settlement and he has no qualms about making concessions and signing agreements if he is convinced they are politically advantageous. In fact, they would tell you that Netanyahu talks out of the right side of his mouth and acts to the left, adopts nationalist rhetoric but implements pragmatic policy, and that Netanyahu’s sole ideology is Netanyahu himself.

The facts in themselves support the contention that Netanyahu is a man of peace. During his first term (1996-99), he recognized the Oslo Accord his predecessor Yitzhak Rabin made with the Palestinians, restored the West Bank city of Hebron to Palestinian control, signed the Wye River Memorandum with PLO leader Yasser Arafat and conducted serious negotiations with Syrian President Hafez al-Assad on peace with Syria and withdrawal from the Golan Heights.

When he returned to power in 2009, Netanyahu picked up where he left off. He delivered a landmark speech at Bar-Ilan University, recognizing the two-state vision, suspended construction in West Bank settlements and conducted renewed negotiations with Syrian President Bashar al-Assad about withdrawal from the Golan Heights. He twice conducted complex, advanced talks with the Palestinians — the first known as the “London channel,” conducted secretly by envoys from both sides, and the second by Secretary of State John Kerry and US envoy Martin Indyk in 2013 and 2014.

Also, Netanyahu did not go to war. He did not make good on his promise to invade the Gaza Strip and bring down Hamas, he did not engage with Hezbollah in Lebanon — unlike his predecessor Ehud Olmert — and practiced military restraint. Netanyahu is not adventurous and he fears military entanglements, which makes him one of the most defense-oriented prime ministers in Israeli history. He approves far fewer operations across enemy lines than did Olmert and avoids unnecessary risks, especially after the fiasco of the attempted assassination in Jordan of Hamas leader Khaled Mashal 13 years ago. Mossad chiefs and special ops commanders know how hard they have to work to convince Netanyahu to sign off on a complex or risky operation. It is not a matter of his being less courageous than Olmert and his predecessor, the late Ariel Sharon; he is simply less willing to gamble on his future. In Israel, military entanglement is a sure-fire way to political exile or a commission of inquiry. Netanyahu has reduced the chances of such outcomes to a minimum.

On his worldview, Netanyahu’s is a complex personality. As the son of a staunch Zionist revisionist — historian Benzion Netanyahu — he was weaned on right-wing ideology. Over time, his thinking became more nuanced. His current ideology is personal: He truly believes that he must continue to serve as Israel’s prime minister in order to ensure the survival of the Jewish state. Netanyahu is convinced that only he can lead Israel to a safe harbor. His wife Sara Netanyahu said as much, quite clearly and often, including in taped remarks she made 20 years ago. His belief and that of his associates and voters that he is a version of a modern-day Messiah allows him to mold his ideology according to his political needs. When he needs support from the political right, he breaks to the right. When he finds himself corralled by circumstances that require concessions and agreements, he veers to the left, and so on.

A 2001 event provides a glimpse of his true beliefs. At the time, Netanyahu was “between jobs,” after being defeated in the 1999 elections and bowing out of politics. He went to the West Bank settlement of Ofra to visit Geula Hershkovitz, who had lost her husband and son in a terror attack during the second intifada. He arrived with a single aide and asked that the cameras be turned off. His fascinating conversation with the widow and her family, which was taped unbeknownst to him (available on YouTube), was enlightening.

Netanyahu started out talking about international support for Israel, including American support. “I know what America is. America is something that can easily be moved. Moved to the right direction. They say they are for us, but, it’s like … They won’t get into our way. On the other hand, if we do something, they say something. Eighty percent of the Americans support us, it’s absurd. … That administration [Clinton’s] was extremely pro-Palestinian, I was not afraid to maneuver there, I was not afraid to clash with Clinton, I was not afraid to clash with the UN. I was paying the price anyway, I preferred to receive the value. Value for the price.”

Netanyahu was then asked why he had not abrogated the Oslo Accord when he took office in 1996. His explanation was illuminating. He could not have abrogated the agreement, he explained, but he interpreted it in a way that allowed him to stop the withdrawals from West Bank territory and the gallop toward the 1967 borderlines. He interpreted the “military sites” from which Israel would not withdraw as “security zones," thereby greatly expanding the areas over which Israel could maintain control under terms of the agreement. The Jordan Valley in its entirety, for example, was declared a “security zone.” In other words, Netanyahu did not rescind the Oslo Accord, he simply left it up in the air, waiting for it to dry up and collapse. And that was what happened, indeed. He managed to hold onto the stick at both ends — to avoid risking his political and international standing by abrogating an agreement Israel had signed, but to block its progress and starve it of oxygen until it expired.

Netanyahu once explained that Israel could be generous in making longitudinal concessions, but it must not withdraw sideways. In other words, giving up the Sinai Peninsula was possible; conceding the Golan Heights could be possible, too; but any concession of lands in the West Bank (sideways) given Israel’s geographic narrowness is a distinct threat to national security. He will therefore conduct eternal negotiations, exhaust his rivals, maneuver endlessly and eventually ink only what he absolutely must, or whatever he gets free, without giving much in return.

That is what occurred in Washington this week. Netanyahu signed an agreement that does not end war, but also does not entail territorial concessions, maintaining his peacemaker image without undermining the right-wing rhetoric that keeps his electoral base loyal. Netanyahu, unlike most people, manages to have a cake and eat it, too.