Although Russia continued to oppose language in the Action Group on Syria statement calling for Bashar al-Assad to leave power, US Secretary of State Hillary Clinton insisted the changes made at Saturday's meeting in Geneva did not alter that key demand. Al-Monitor's Laura Rozen obtained a draft communiqué, linked below. 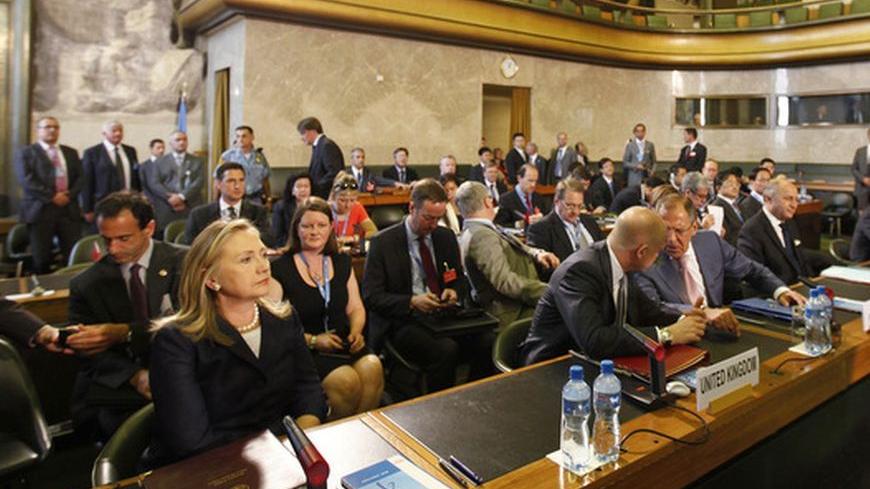 Secretary of State Hillary Clinton on Saturday, June 30, downplayed the changes made to the text of a joint statement on what should be done in Syria that was issued by major powers meeting in Geneva.

Russia continued to oppose language in the statement calling for a political transition under which Bashar al-Assad would be required to leave power. But Clinton insisted the edits agreed on at the meeting convened by UN Syria envoy Kofi Annan Saturday did not alter that key demand.

“Assad will still have to go,” Clinton told reporters in Geneva Saturday. "He will never pass the mutual-consent test, given the blood on his hands.”

The plan agreed at the Action Group on Syria meeting calls “for the Assad regime to give way to a new transitional governing body that will have full governance powers,” Clinton said.

Indeed, Clinton continued, “we and our partners made absolutely clear to Russia and China that it is now incumbent upon them to show Assad the writing on the wall.”

“The unity government should be formed on the basis of ‘mutual consent,’” Annan stressed Saturday, as reported by Russia Today, which noted that Russian Foreign Minister Sergei Lavrov “also pointed out the new document does not command a political process for Syria.”

A draft Action Group communiqué dated June 28 and obtained by Al-Monitor called for “... an immediate cessation of violence in all its forms; … guidelines and principles for a political transition that meets the legitimate aspirations of the Syrian people; and … actions … [to] support [Annan's] … efforts to facilitate a Syrian- led political process.”

But an Annan-proposed “non-paper” dated a day earlier (June 27) called explicitly for the formation of a transitional government in Syria that would exclude certain actors.

The national unity government “could include members of the present government and the opposition and other groups … but would exclude from government those whose continued presence and participation would undermine ... the transition and jeopardize stability and reconciliation” — namely, Assad, the earlier version of the document said.