Hezbollah and Iran May Need Plan B After Syria Bombing

Hezbollah Chief Hassan Nasrallah and Iran seemed stunned a day after several members of Bashar al-Assad’s inner circle were assassinated at a cabinet meeting in Damascus, writes Laura Rozen. Neither was prepared for the Syrian status quo to shift so quickly and Iran hasn't even begun to prepare for a Syria Plan B. 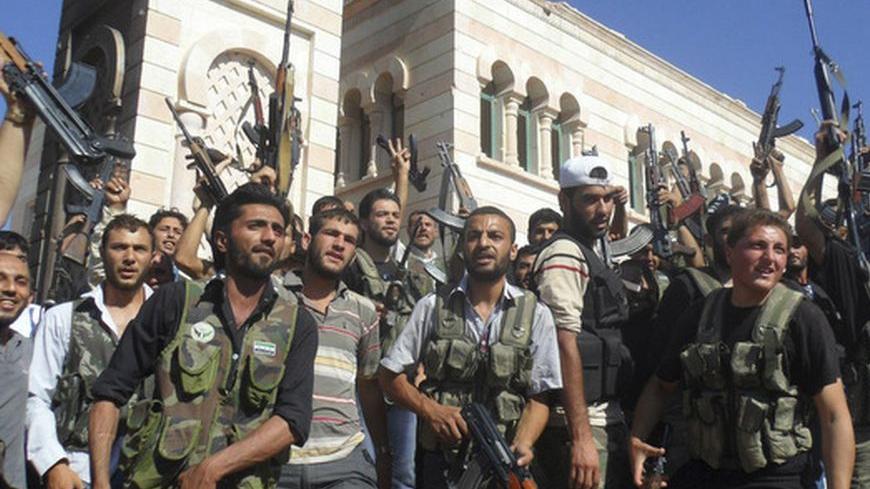 Members of the Free Syrian Army are seen in Azzaz, Aleppo province July 19, 2012.

A day after several members of Bashar al-Assad’s inner circle were assassinated at a cabinet meeting in Damascus, Assad’s allies may be beginning to re-evaluate his longevity and what comes next, some regional analysts said.

But speeches by Hezbollah chief Hassan Nasrallah Wednesday and Iran’s initially stunned reaction to events in Damascus suggest neither was quite prepared for the Syrian status quo to shift so quickly.

Syrian State TV aired a video of Assad Thursday amid speculation about his whereabouts, CNN reported. The video showed Assad conferring with his new Defense Minister Gen. Fahd Jassem al-Freij, who was appointed to succeed Gen. Daoud Rajha, one of the top Assad security aides killed at a cabinet meeting.

Russia and China, meantime, on Thursday vetoed a Western-backed UN Security Council Resolution that would have imposed possible sanctions if Syrian security forces did not pull back to barracks within 10 days.

Despite the latest diplomatic reprieve, “Assad’s strategic value to his allies is eroding quickly,” Beirut-based analyst Emile Hokayem told Al-Monitor in an interview Wednesday. “Hezbollah and Iran will increasingly see any assistance they provide to him as a sunk cost.”

“I don’t believe Iran will double down on Syria,” Hokayem said. Rather, he added, Iranian “strategists have got to be wondering how they got their assessments so wrong. The Iranians thought that Assad had more tricks in his tool box. The Iran regime was ‘better’ at dealing with its own defectors. That is the problem with a minority regime.”

Each country’s analysis of the Syria situation has been limited by the nature of its Syrian interlocutors, Hokayem posited. And “the Syria-Iran relationship is owned by security guys who operate in the dark shadows,” he said. “We don’t know those people. These guys have been working on this for 30 years. There is no love among [the Syrians and Iranians] at a people to people level. But among the security elites there is."

Iran analyst Hossein Shahbazi agreed, saying he came away from a recent conversation with an Iranian official with the impression they had not begun to prepare for a Syria Plan B. The Iranians thought the international Contact Group meeting on Syria in Geneva last month “provided the right framework” for mediating a solution between the two sides, he said.

“The Iranian government does not have a solely realpolitik” approach to Syria, Shahbazi told Al-Monitor in an interview Wednesday. “What we would call their ‘soft power’ is very important, compared to hard power. Their ideology still believes in the [Islamic] revolutionary values. They have their natural relations, influence and interest in the region but do not want to go around just dictating” as they see Western powers doing in the Middle East.

Although the Iranian government is close to Assad, “it won’t want to sink with his ship,” Iranian-born analyst Meir Javedanfar told Al-Monitor Wednesday. “Ayatollah Khamenei is most likely to leave Assad the moment he realizes that his regime has no chance of survival." After the July 18 assassinations, Javedanfar continued, “increasing number of Iranian government officials observing Syria could say that moment is now.”

Regarding the assassinations of members of Assad’s inner circle in Damascus Wednesday, Hokayem said he did not see it as a turning point, but rather reinforcement of the descending course of the Assad regime that has been evident to him for weeks.

“The Assad regime has been on a downward trajectory it can no longer reverse,” Hokayem said. “It can only get worse for him.”

“The insurgency has been scoring symbolic and military victories in the past few weeks that seemed irreversible to me,” he said. “Once you have high-level defectors — that’s irreversible: they aren’t going back.”

Previously, “a lot of fence-sitters still believed in the idea of the [Syrian] state and Assad as the one carrying it,” Hokayem said. But once the fighting “hit the capital in such a spectacular way” the past five days, “the narrative that Assad has been trying to build — that he still embodies the state — went up in flames.”

Laura Rozen writes the Back Channel news blog for Al-Monitor. She previously served as senior foreign-policy reporter for Politico and Yahoo News, and wrote the “Cable” blog for Foreign Policy magazine. She is based in Washington, DC. You can follow her on Twitter at @lrozen.