An influential rabbi whose former aide is embroiled in a campaign finance investigation has ties to one of the most powerful members of Congress, House Majority Leader Eric Cantor, according to interviews and an examination of campaign filings by Al-Monitor's Laura Rozen. 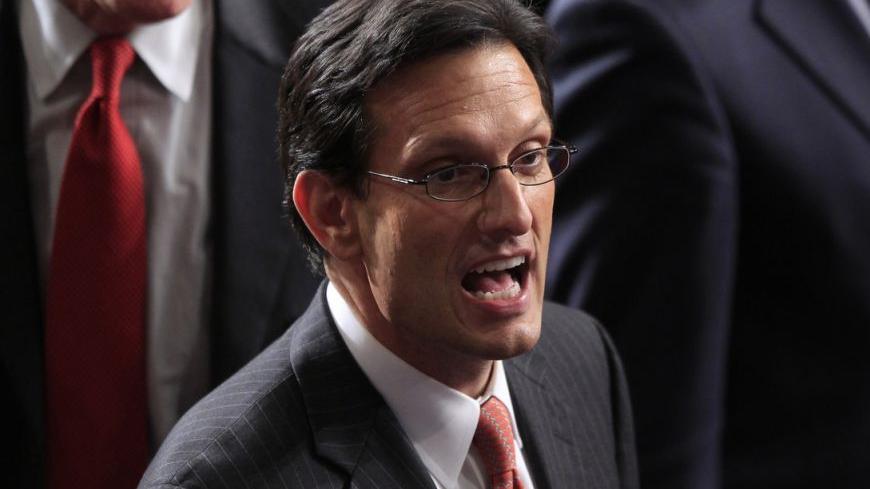 UPDATE: This article was updated Aug. 26 to note that the top seven donors to Eric Cantor’s 2008 campaign are all followers or associates of Rabbi Pinto.

An influential rabbi whose former aide is embroiled in a campaign finance investigation has ties to one of the most powerful members of Congress, House Majority Leader Eric Cantor.

Ofer Biton, a former aide to the Rabbi Yoshiyahu Yosef Pinto, was arrested by the FBI on immigration fraud charges last week. Biton, an Israeli citizen, had also served as a fundraiser to Rep. Michael Grimm, a Republican from New York's Staten Island. Recent media reports indicate that Grimm is being investigated for having possibly accepted illegal campaign contributions from members of Pinto’s congregation.

Interviews and an examination of campaign filings by Al-Monitor show that Pinto also has ties to Cantor, the Virginia Republican who is the second most powerful member of the US House of Representatives. There is no evidence of any impropriety in Cantor’s contacts with Rabbi Pinto. Lawyers for Grimm and Biton, in recent media reports, have both denied any wrongdoing by their clients. Pinto allies cast him and his congregation as the victim of malfeasance by an estranged aide.

A Jewish community businessman who did not want to be identified told Al-Monitor in interviews that in 2009, he spoke with Biton, seeking contacts who might be able to help him generate interest in his business. Biton allegedly told the businessman that Rabbi Pinto was in “close and direct contact” with both Cantor, a Virginia Republican, as well as with Rep. Anthony Weiner, the New York Democrat who resigned in a sexting scandal in 2011. In subsequent conversations, the businessman said Biton directed him to a fundraiser for Cantor. “When I met Ofer …. he was saying Cantor is in very good contact with them, [Rabbi Pinto’s] Yeshiva,” the source said.

Al-Monitor has learned that the businessman was put in touch with Jerry Seppala, a Cantor fundraiser, who in turn put the source in touch with a member of Cantor’s staff. Seppala did not return a call left by Al-Monitor at his office in Wayzata, Minn. Federal Election Commission (FEC) filings show that Cantor’s campaign paid Seppala’s firm, GR Seppala & Associates about $250,000 for fundraising consulting work for his 2008 and 2010 campaigns. Campaign expenditures in 2006 show that Cantor’s campaign paid GR Seppala $110,450, as well as $50,000 to Risdall Advertising Agency, a Wayzata-based advertising agency in which Seppala also serves as vice president. (In 2011, Seppala reportedly served as the fundraiser for Solutions 2012, the pro-Newt Gingrich SuperPAC, which received $20 million from Las Vegas casino magnate Sheldon Adelson.)

Campaign records show that Cantor has received large contributions from some of Rabbi Pinto’s followers and associates.

Indeed, detailed examination of federal campaign filings by Al-Monitor indicate that the top seven donors to Cantor’s 2008 campaign are followers or associates of Rabbi Pinto. Together, the group of close Rabbi Pinto associates that made up Cantor’s seven top donors in 2008 gave about $330,000 to the Virginia Republican–almost 10% of the $3.9 million total Cantor raised for the 2008 race. None of them are from Virginia, and some had not previously given to US political campaigns.

Real estate broker Haim Binstock, and his wife his wife, Gallya Binstock, together donated $91,600 to Cantor’s campaign on Oct. 31, 2008. Binstock’s business partner Ilan Bracha, and his wife, Mati Bracha, also donated $91,600 to Cantor’s campaign on the same date, campaign filings show. In 2008, Binstock and Bracha Manhattan property they planned to donate for use as a synagogue for Rabbi Pinto, they told The Wall Street Journal last year.

More recently, George Klein, described by The New York Times as a longtime Republican power broker who attends Pinto’s Shuva Israel congregation at 155 E. 58th St. in Manhattan, donated $50,000 to Cantor’s Victory Fund on Oct. 18, 2011, campaign filings show. Klein, who has donated to several other Republican candidates in smaller amounts, is also a member, with Cantor, of the Republican Jewish Coalition.

FEC filings show that Weiner, before he resigned from Congress, also received campaign contributions from Pinto followers and associates. However, Weiner  reported returning a $4,950 donation from Ben Zion Suky — the rabbi's “right hand” — last year. In addition, it is notable that Weiner told Roll Call in March 2012 that he went to the FBI in 2010 to relay allegations from Rabbi Pinto that Rep. Grimm was extorting the rabbi and his followers.

Last August, Grimm was part of a large U.S. congressional delegation that traveled to Israel at the invitation of the sister group to the pro-Israeli lobby group, AIPAC. A spokesman for Cantor’s office told Politico on Aug. 19 that Cantor had rebuked 30 members of the delegation, including Grimm, for taking a late-night swim Aug. 18 in the Sea of Galilee, in which one congressman, Kevin Yoder of Kansas, has acknowledged skinny-dipping. The Cantor aide said a member of the House Majority Leader’s staff had been interviewed by the FBI about the incident. But law enforcement sources subsequently told The Wall Street Journal and Talking Points Memo that the FBI questions had nothing to do with allegations that skinny-dipping had occurred on the trip, as the Politico article implied. Rather, they were investigating why Grimm had not properly filed paperwork on the subsequent leg of his trip to Cyprus. A subsequent Politico report Aug. 24 citing Cantor staff said the questions over the Israel trip may be because an AIPAC official initially picked up the $385 bar tab at the Galilee restaurant, before he was reimbursed a day later.

Doug Heye, deputy chief of staff to Cantor, told Al-Monitor Aug. 20 that he was accurately quoted by Politico. He did not immediately have information to comment on questions about contacts between Cantor and Pinto associates, but said he would send it if and when it became available.

A spokesman for the US Attorney’s office in the Eastern District of New York told Al-Monitor that he would not comment on the report that the FBI had interviewed a member of Cantor’s staff or what the questioning concerned.

Separately, Cantor will not speak at the GOP convention in Tampa next week, Buzzfeed reported. However, Cantor will do several TV interviews, an aide told Al-Monitor.

Laura Rozen writes the Back Channel news blog for Al-Monitor. She previously served as senior foreign-policy reporter for Politico and Yahoo News, and wrote the “Cable” blog for Foreign Policy magazine. She is based in Washington. You can follow her on Twitter: @lrozen.lrozen.