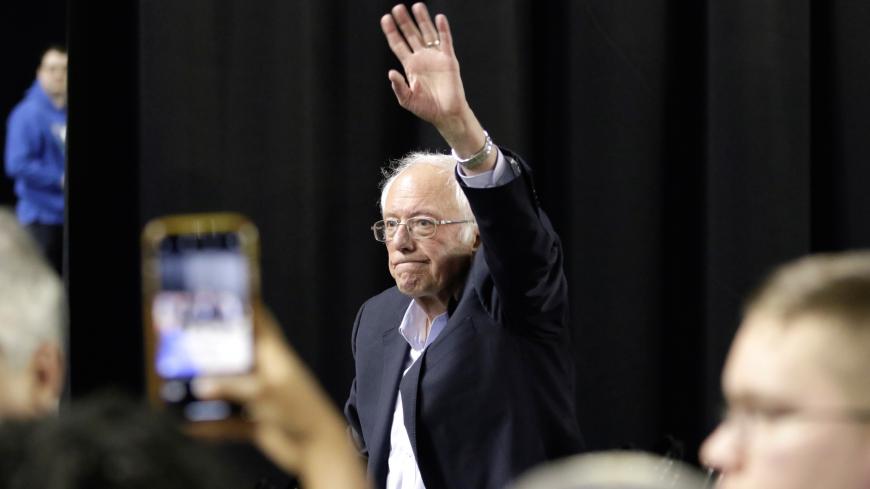 US Democratic 2020 presidential candidate Sen. Bernie Sanders waves to the audience at a campaign rally in the Tacoma Dome in Tacoma, Washington, Feb. 17, 2020. - REUTERS/Jason Redmond

Sen. Bernie Sanders, I-Vt., has recently emerged as the front-runner in the Democratic presidential field. The rise of the progressive darling’s star also is coinciding with a barrage of television attack ads against him in the crucial early voting states of Iowa and Nevada.

Although the ads have been purchased by a super PAC called Democratic Majority for Israel, they make no mention of Sanders’ pro-Palestinian advocacy. Instead they take aim at Sanders’ perceived electability against President Donald Trump in a general election, arguing that a self-identified socialist is ill-equipped to take on Trump and highlighting Sanders' heart attack last year.

Still, the bulk of the political action committee’s funding comes from a group of high-profile political donors affiliated with the powerful American Israel Public Affairs Committee (AIPAC). The influential lobbying group has historically prided itself on bipartisanship. But its pushback against Sanders, coupled with its social media ads targeting congressional Democrats last month, reflects its growing concern over the pro-Palestinian faction within the Democratic party.

The super PAC airing the anti-Sanders ads raised nearly $2.3 million for its war chest last year. An Al-Monitor analysis of Federal Election Commission filings shows that the vast majority of those funds — some $1.8 million — came from prominent AIPAC donors in November and December alone.

Democratic Majority for Israel spent $800,000 of that money on its Iowa ad buy. It’s still unclear how much the super PAC intends to spend on its Nevada ad buy or how much it has raised so far this year.

Mark Mellman, an AIPAC strategist and prominent Democratic pollster, launched the super PAC last year to support pro-Israel candidates and combat the increasing skepticism of the close US ally within his party. In his quest to take down Sanders, Mellman has marshaled significant resources from some key movers and shakers in AIPAC and the broader pro-Israel world.

Gary Lauder, a venture capitalist, was also generous with a donation of $500,000 that same month. His wife, Laura Lauder, sits on AIPAC’s northwest regional board.

Paula Gottesman, an AIPAC congressional club member who sits on the AIPAC New Jersey Council, donated $100,000 to the super PAC in November. And Barry Porter, a Democratic Majority for Israel Board member, forked over $50,000 to help fund the super PAC in December.

Finally, Michael Sonnenfeldt, who donated $25,000 to the super PAC in December, sits on the board of Trustees for the Washington Institute for Near East Policy, a think tank with strong ties to AIPAC.

Additionally, The Intercept reported last week that AIPAC is counting donations to Democratic Majority for Israel as donations to the lobbying group, granting donors more access within the organization. AIPAC — which rarely responds to media queries — flatly denied the arrangement in an email to The Intercept.

Most of the super PAC’s contributors have a history of donating to candidates on both sides of the aisle, but particularly favor pro-Israel Democrats such as House Foreign Affairs Committee Chairman Eliot Engel and Appropriations Chairwoman Nita Lowey, both of New York.

AIPAC started running Facebook ads against Sanders last year, asking users to sign a petition telling him that “America stands with Israel.” While the initial attacks slid largely under the radar, AIPAC could not avoid a furor earlier this month when it posted social media ads accusing “radicals in the Democratic party” of “pushing their anti-Semitic and anti-Israel policies down the throats of the American people.”

Some of the ads included graphics singling out two lawmakers backing Sanders: Reps. Rashida Tlaib, D-Mich., and Ilhan Omar, D-Minn. Both Tlaib and Omar support the boycott, divestment and sanctions movement against Israel despite Sanders’ opposition to it.

The graphic also included Rep. Betty McCollum, D-Minn., who hasn’t endorsed the boycott movement and has backed her home-state senator Amy Klobuchar for president. (While Klobuchar’s positions on Israel closely align with AIPAC, McCollum has introduced legislation to condition US military aid to Israel based on its treatment of Palestinian child prisoners.)

AIPAC took down the ads and offered an “unequivocal apology” expressing regret that “the ad’s imprecise wording distorted our message and offended many.” The apology also insisted that the ads “alluded to a genuine concern of many pro-Israel Democrats about a small but growing group, in and out of Congress, that is deliberately working to erode the bipartisan consensus on this issue and undermine the US-Israel relationship.”

A rival lobbying group, the left-leaning J Street, has called on Democratic Majority for Israel to take down the anti-Sanders ads.

“Like their partner organization AIPAC — which recently ran vitriolic attack ads echoing Republican smears against progressive Democrats — [Democratic Majority for Israel’s] right-leaning positions on Israel and US foreign policy are completely out of touch with the vast majority of Democrats and American Jews,” J Street President Jeremy Ben-Ami said in a statement.

Whether AIPAC and Democratic Majority for Israel will be successful in taking on Sanders and other pro-Palestinian Democrats remains to be seen.

The Sanders campaign said it raised $1.3 million in one day after the super PAC started airing its Iowa ads. Still, Sanders was the favorite to win Iowa when the ads aired, yet the caucuses resulted in a narrow tie between the progressive senator and former Mayor Pete Buttigieg of South Bend, Indiana.

And while presidential candidates have traditionally addressed the annual AIPAC policy conference in election years, Sanders has indicated that he will skip it this year — just as he did during his 2016 primary campaign. Another candidate, Sen. Elizabeth Warren, D-Mass., has also vowed to skip the March conference.