Opposition to Bernie Sanders draws out bipartisan unity at AIPAC

AIPAC has struggled to maintain its bipartisan stature on Capitol Hill recently, but rallying Democrats and Republicans against Bernie Sanders has given it a new opportunity. 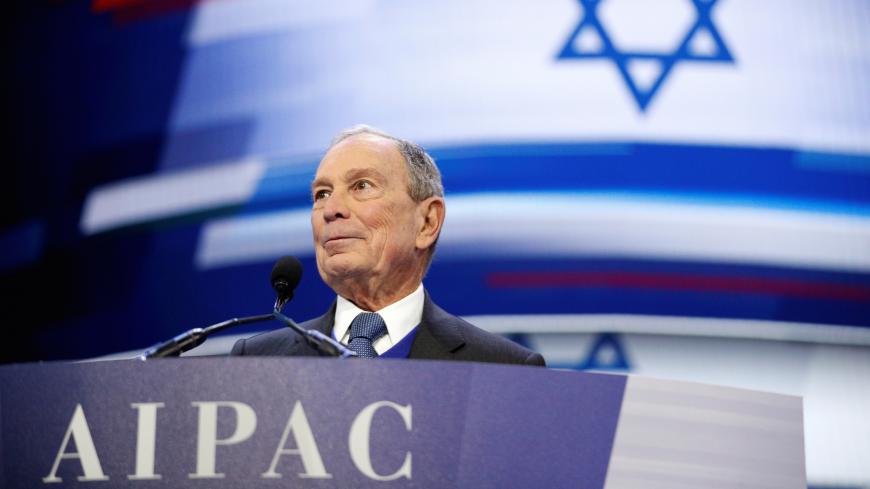 At the heart of that consensus is the current front-runner in the Democratic presidential primary, Bernie Sanders. The independent senator from Vermont is boycotting the conference and has denounced it as a platform for “bigotry.” Still, he nonetheless loomed large in his absence.

Pence and Bloomberg received some of their biggest applause lines when they eviscerated Sanders before AIPAC’s rank and file attendees, who were not shy about actively booing the Jewish candidate from Vermont.

Pence condemned Sanders for criticizing President Donald Trump’s strike on Iranian Maj. Qasem Soleimani as “assassinating a government official.” Later in the speech, Pence denounced Sanders’ recent attacks on AIPAC as a platform for “bigotry” and tried to tie Sanders' views to the rest of the Democratic presidential field.

“Even more troubling, when Bernie Sanders smeared Israel at last week’s debate, not a single candidate on that stage stood up to challenge him,” said Pence.

But Pence’s point was somewhat undermined by the Democrats’ other Jewish presidential candidate, who addressed AIPAC immediately before the vice president.

Bloomberg did refrain from picking a fight with Sanders on the debate stage after Sanders called Israeli Prime Minister Benjamin Netanyahu “a reactionary racist.” Bloomberg instead reserved his ammunition for his AIPAC speech today where he lamented “deeply troubling” cracks in Washington’s bipartisan pro-Israel consensus and called Sanders “dead wrong.”

“Unfortunately, not all of my fellow Democrats in this race have attended an AIPAC conference,” said Bloomberg. “Calling it a racist platform is an attempt to discredit those voices, intimidate people form coming here and weaken the US-Israel relationship.”

Bloomberg also received thunderous applause when he vowed that he would “never impose conditions on military aid [to Israel] no matter what government is in power.” His pledge served as another rebuke of Sanders, who wants to use military aid as leverage over Israel’s occupation of the West Bank and its blockade of the Gaza Strip.

Tellingly, AIPAC is asking its activists to push back against aid restrictions during its annual Capitol Hill lobby day on Tuesday. AIPAC will lobby lawmakers to give Israel its annual $3.8 billion in military aid “without any added conditions.”

Undeterred, Sanders doubled down on his decision to boycott AIPAC during a CBS interview Sunday, noting that the lobby group has “a lot of money” and “power.”

“I am not anti-Israel,” said Sanders. “I will do everything I can to protect the independence and security and the freedom of the Israeli people. But what we need in this country is a foreign policy that not only protects Israel but deals with the suffering of the Palestinian people as well.”

Sanders was specifically asked to respond to comments made by Israel’s ambassador to the United Nations, Danny Danon, that same day.

“We don’t want Sanders at AIPAC,” said Danon. “We don’t want him in Israel. Anyone who calls our prime minister a ‘racist’ is either a liar, an ignorant fool, or both.”

Howard Kohr, AIPAC’s CEO, also took aim at Sanders and his supporters Sunday without mentioning the senator by name as Kohr called out political leaders who “are not our friends” and becoming “a vocal and energizing part of the electorate.”

AIPAC first started running social media ads against Sanders last year, which largely slid under the radar. The lobby group faced more heat last month for ads accusing “radicals in the Democratic party” of “pushing their anti-Semitic and anti-Israel policies down the throats of the American people.”

AIPAC ultimately apologized for and retracted the ads, some of which singled out two pro-Palestinian Sanders supporters: Reps. Ilhan Omar, D-Minn., and Rashida Tlaib, D-Mich. However, several prominent AIPAC leaders also bankrolled the lion’s share of funding for a pro-Israel super political action committee that ran ads targeting Sanders ahead of the Iowa and Nevada caucuses last month.

Former Vice President Joe Biden, Sanders’ main opponent, addressed the crowd via video. Sen. Amy Klobuchar, D-Minn., addressed the conference over a video as well, but dropped out of the race today to endorse Biden. Conversely, Sen. Elizabeth Warren, D-Mass., was the first Democratic candidate to announce she would boycott the AIPAC conference.

In his video, Biden called on Palestinians to end “incitement in the West Bank” and rocket attacks out of Gaza. However, he also called on Israel “to stop the threats of annexation and settlement activity.”

“That’s going to choke off any hope for peace,” said Biden. “And to be frank, those moves are taking Israel further from its democratic values, undermining support for Israel in the United States, especially among young people in both political parties.”

While introducing Pence, Korn recited a litany of Trump’s AIPAC-backed policy moves — including the Soleimani strike and the peace proposal — stressing that the plan “was developed in consultation with the leaders of Israel’s two major political parties.”

“There’s nothing new or remarkable here,” said Lara Friedman, the president of the Foundation for Middle East Peace. “Korn’s comments are entirely consistent with AIPAC policies, activism and legislative initiatives that year after year have legitimized and promoted voices aligned with the illiberal, Greater Israel worldview that is at the core of the [Trump] plan.”