In an interview with Al-Monitor's Laura Rozen, Iran Economy Minister Shamseddin Hosseini said that Iran looks to make progress at upcoming talks and encouraged the West to continue negotiating with Khamenei's representatives. He warned that energy sanctions could hurt the economies of those imposing thems more than Tehran. 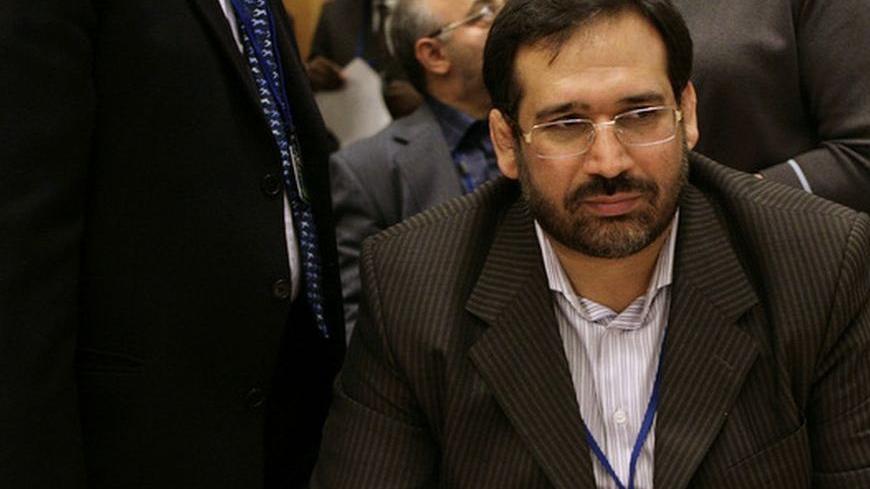 Shamseddin Hosseini is one of the only senior Iranian officials to violate a taboo: Twice a year, Iran’s minister of economy travels to Washington for meetings of the World Bank and IMF. As such, he is one of the only Iranian cabinet ministers to regularly travel to the capital of the country which broke off diplomatic relations with Iran after the 1979 Islamic revolution and US embassy hostage crisis.

In a wide-ranging interview with Al-Monitor at Iran’s mission to the UN in New York Friday [May 18, 2012], Hosseini, 44, was nonchalant about his rare vantage point on the current moment in international diplomacy with the Islamic Republic. World powers gather in Baghdad Wednesday [May 23] for a new round of high-stakes talks with Iran over some of the most sensitive aspects of its nuclear program. Even if the talks go well enough to proceed to a third meeting and Iran agrees to curb its 20%-enrichment work as a confidence-building measure, it is as yet unclear if Western powers have the intention or flexibility to delay or avert European Union sanctions on Iran’s oil exports set to go into effect July 1.

Hosseini said Friday that Iran is looking to make progress at the upcoming talks, but sought to portray Iran as not overly eager or anxious about the recently renewed diplomatic process. He also made clear the West is right to ignore Iran’s domestic political turbulence and to conduct negotiations with the representative of Iran’s Supreme Leader Ayatollah Khamenei. He warned that energy sanctions could hurt the economies of those imposing the sanctions more than Tehran.

“Vis à vis the nuclear issue, it’s very clear which authority is the deciding authority in our nation,” Hosseini said. “But generally speaking, we give the same level of meaning to the talks that they deserve — no more, no less.”

“If the question is, ‘during these talk and dialogue, based on our positions, will we still seek progress,’ of course, the answer is yes,” Hosseini said. “We will never deviate from the path.”

“Our goals are clear,” he continued. “They are safekeeping of the goals of the Iranian people. We will be steadfast in the future.”

“Vis à vis the ongoing dialogue and our chief negotiator, something very clear to everyone is that his positions have been closely coordinated with the necessary authorities,” Hosseini said, referring to Iran’s chief nuclear negotiator Dr. Saeed Jalili, the secretary of Iran’s Supreme National Security Council. “So all of these institutions are very connected and extremely coordinated within these strategic issues,” Hosseini said. On the nuclear negotiations, Dr. Jalili “represents the officials positions of the government,” Hosseini said. “He also has the full authority.”

Asked what he thought about the proposition that the West was trying to use sanctions on Iran as a substitute for war over Iran’s nuclear program, Hosseini said neither measure is an end in itself.

“I do not believe sanctions, war, are an end in and of themselves,” he responded. “These are tools,” adding that they are being improperly given legitimacy.

“I do suggest that someone conduct some serious, in-depth reviews [of the tools] with which [the West is] trying to accomplish its objectives,” Hosseini added, referring to the sanctions. “I have a bad feeling, it’s not useful. There’s a folk poem in Iran. The first verses are: ‘You conducted yourself badly 100 times, and reap the rewards. Search and you shall seek it.’”

“Can one grow without using energy?” Hosseini said when asked about Iran’s economic relations with Asian trade partners who are under pressure from the West to curb their imports of Iranian energy. “For that very reason, you see, pressures have reached a point that those who bring that pressure to bear complain about the pain.”

“You see, when the framework of sanctions encompass the energy sector, it becomes obvious, just as many predicted, that sanctions are not a zero-sum game,” he said. “There are no clear winners. In reality, it’s a lose-lose game.”

In 2006, oil prices decreased drastically, Hosseini said. “At the time, I was head of the treasury. I was aware I could still manage the economy. But economic growth without energy is an impossibility. Not without much higher costs to bear. This means inflation, unemployment, job losses, demonstrations across European streets. We are producers and suppliers of oil, and demand for that oil is quite varied and vast.”

“In the economic management of the world, political games and politics must not be the standard for analysis,” Hosseini warned. “Or the results derived will be the wrong ones.”

Regarding Iran’s economic relations with Turkey, Hosseini said they are significant and largely unaffected by political tensions between Ankara and Tehran over Syria and Iraq.

“Of course, Iran and Turkey are two big neighbors in a region with many common cultural factors tying them together,” he said. “Both very much appreciate each other’s friendship. Traders and industry leaders are very aware of each other’s strong suits. Therefore, economic and trade ties are only increasing.”

How are these ties being affected by differences over Iran’s support for Syria’s Bashar al-Assad and Turkey’s break with Assad over the killing of over 9,000 Syrians? Hosseini said economic relations are not affected.

“Iran and Turkey fully appreciate one another's friendship,” he said. “But it seems there are some instances [where] we may have different viewpoints. But I do firmly believe we have so many common interests and so many well established ties [that we are able] to help resolve tertiary problems in the region and not let tertiary issues affect them.”

Hosseini was positively effusive about Iran-Iraq ties — while obliquely blaming the United States for previously supporting Iraq’s Saddam Hussein and later invading to overthrow him.

“Due to some missteps and treacheries that individuals such as Saddam Hussein perpetrated against humanity — and I always believe he was guided by other hands behind the scenes — the people of Iraq were made to suffer a heavy price. We also suffered a heavy price,” he said, referring to the 8-year Iran-Iraq war (1980-1988) in which some 500,000 Iranian and Iraqi soldiers and civilians were killed. (Hosseini did not say whether he had fought in the war, but did say that many people of his generation and younger fought in it.)

“As we continue the route to progress and growth, we do believe we must have a share of [the] rebuilding of Iraq,” he said. “Relations between the people of Iran and Iraq cannot be heard: they must be seen and felt. The warmth of friendship must be experienced.”

“Due to all of these factors, trade is quite high. Everyone with quite a bit of ease sends goods to Iraq,” he said.

Electricity “is a vital need for our Iraqi brothers and sisters,” he said. “Therefore we are honored to export electricity to Iraq and build power plants for them. This is done through the private sector.”

I asked Hosseini — who wrote his economics PhD dissertation on water pricing — about his unique position as one of the only senior Iranian officials to regularly visit Washington. What’s it like to go into the belly of the beast, as it were, (to the translator’s muttered “oh my god”), to attend meetings at the World Bank just down the street from the White House?

Hosseini noted that his trips to the city are part of his official duties, and was quick to add that the head of Iran’s Central Bank also comes to the meetings in Washington. He stayed at hotels recommended by the World Bank whose names he couldn’t remember.

“A world traveler versus a businessman versus a government representative all have differing view pints,” he said. “My duties within the World Bank — some take place in Washington, DC and some in New York City.”

So what does he think of Washington, I pressed him. What do I mean, he asked. Some think it’s boring, a bit conservative, compared to New York, I told him.

“Generally American cities such as Washington tend to be less populated and quieter than New York,” he said diplomatically.