Iran's minister of economic affairs and finance puts a positive spin on a sanctions-burdened economy and says he welcomes more "people-to-people" ties with the United States. 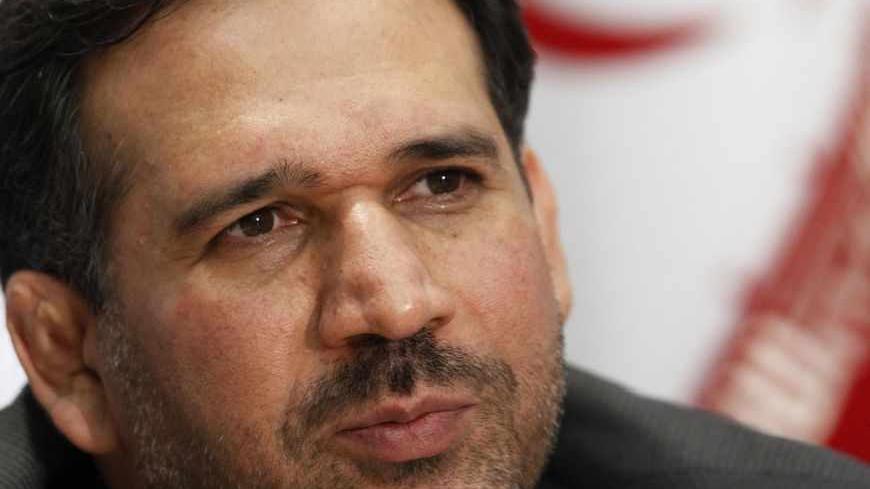 Iranian Minister of Economic Affairs and Finance Shamseddin Hosseini speaks during a news conference at the Iranian embassy in Tokyo, Oct. 12, 2012. - REUTERS/Yuriko Nakao

WASHINGTON — Sanctions have had a mixed impact on the Iranian economy, boosting local agriculture and tourism even as they have depressed oil sales and made it harder for Iran to import automotive parts and some medicines, Iran’s minister of economic affairs and finance, Shamseddin Hosseini says.

In an interview with Al-Monitor Friday [April 19] evening in Washington, where he was attending the semi-annual meeting of the International Monetary Fund (IMF) and World Bank, Hosseini said Iran would welcome US measures to designate authorized banking channels for humanitarian purposes but suggested that any improvement in overall US-Iran relations would depend on US recognition of what Iran regards as its right to produce nuclear fuel.

Hosseini is among a tiny group of Iranian officials allowed to visit the US capital periodically. His current visit is his eighth or ninth since he was appointed to office five years ago, he said.

Sanctions tied to Iran’s nuclear program have had a severe impact on the Iranian economy, reducing oil exports by half last year and making it difficult for Iran to repatriate earnings for the oil it does sell. Experts say last year was the toughest since the end of the Iran-Iraq war in 1988 and that inflation and unemployment are at record levels. According to the latest figures released by the IMF last week, the Iranian economy contracted by 1.9% last year and will shrink another 1.3% this year. Growth will resume next year, the IMF predicted, but only by 1.1%.

Hosseini disputed the IMF’s figures, asserting that economic performance both last year and so far this year was positive. However, he declined to give figures for GDP performance. Instead, Hosseini said that the stock market had risen by 47% last year and that agricultural production, mining and industrial sectors “that do not depend on the foreign exchange rate, witnessed growth” of about 20%, while imports declined by 14%.

Asked if the stock market figure reflected devaluation of the Iranian currency, the rial, Hosseini replied “not necessarily.” “Sanctions have different impacts on different sectors,” he told Al-Monitor. They have “both positive and negative impacts” on both Iran and its trading partners.

For example, he said, while Iranian car production declined, so had France’s automobile industry, which used to export cars and car parts to Iran. On the other hand, he said, domestic service sectors such as insurance and tourism have expanded. During the recent Iranian New Year’s holiday, Hosseini said, Iranians did not travel abroad because of the loss in value of the rial compared to other currencies. “The number of people traveling locally during Nowruz holidays increased significantly,” he said.

Hosseini expressed confidence that Iran would continue to be able to export oil despite sanctions and rising production of unconventional sources of oil and gas in the United States and elsewhere.

According to new projections by BP, the United States will be 99% energy self-sufficient in 2030 because of big increases in shale oil, natural gas and renewables. BP also predicts that there will be more than 6 million barrels a day of spare oil capacity by 2015, which could depress prices that have been hovering around $100 a barrel.

Hosseini said Iran expected oil prices to stay firm and even rise by the end of the year and seemed unconcerned by the development of unconventional energy sources. “You cannot replace them with each other,” he said. “Shale can never compete with the oil reserves we have in the Middle East. The maximum they can have is some local usage.”

The Iranian official acknowledged, however, that Iran was having trouble repatriating oil earnings. National Iranian Oil Company head Ahmad Qalebani was quoted Sunday as saying that Iran is owed about $4 billion by customers who cannot figure how to pay because of sanctions that blacklist Iranian banks and bar transactions with Iran in dollars. US regulations that went into effect earlier this year force Iran to purchase goods in the countries that buy its oil – in effect, a kind of barter.

“This is the reality we are facing,” Hosseini said.

He also conceded that Western banking sanctions are making it harder for Iran to import certain medicines even though American and European regulations exempt such trade from sanctions.

“We do welcome any humane efforts for combating the unfair sanctions,” he said, when asked about a recent recommendation by the Iran Task Force of the Atlantic Council to authorize specific Iranian and American banks to conduct trade in food and medicine and facilitate other humanitarian activities.

Another recommendation by the task force was for the US government to ask Iran to allow American diplomats to return to Iran for the first time in three decades to staff an Intersects Section that would process visas for Iranians seeking to travel to the United States.

“Personally, if I was authorized to do something, I would do anything for people-to-people connection,” Hosseini said. He noted, however, that Iranian officials — even when they get permission to come to the US — are restricted in their travel.

Because the US and Iran lack diplomatic relations, Iranian officials can only travel 25 miles outside the center of Washington or New York, site of the Iranian mission to the United Nations.

Asked whether he anticipated any improvement in overall US-Iran relations given the continued stalemate in nuclear talks, Hosseini replied, “What is important more than creating a relationship is the nature of the relationship. There’s no limitation as far as humane relationships are concerned … but political relations depend on the fact that we recognize the rights of the peoples from both countries.”

Barbara Slavin is Washington correspondent for Al-Monitor and a senior fellow at the Atlantic Council, where she works with the Iran Task Force that produced the recent report mentioned in this article. She tweets @BarbaraSlavin1.