Are the Palestinians Serious About Reconciliation?

Despite the talk of Palestinian national reconciliation, it is still undetermined how a political reconciliation can proceed and who will make the first compromise, Mohammed Suliman writes from Gaza. 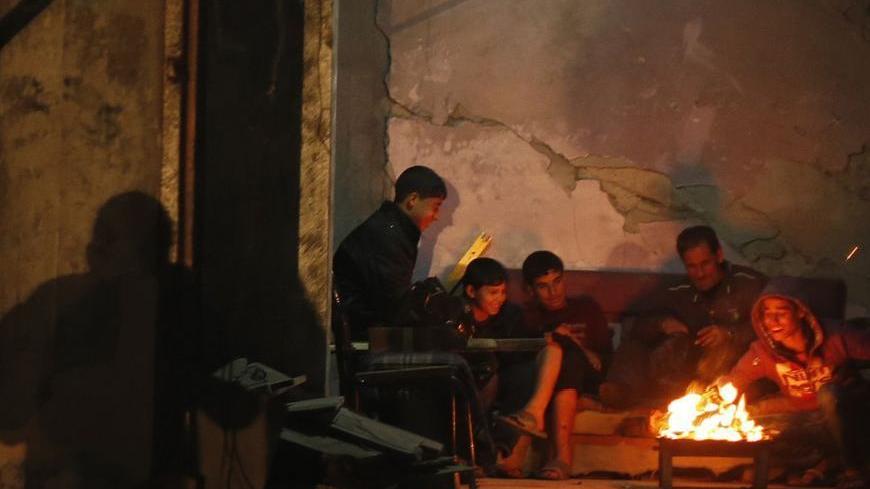 Palestinians warm themselves by a fire inside a house, which witnesses said was damaged in an Israeli air strike during an eight-day conflict, in the northern Gaza Strip, Dec. 20, 2012. - REUTERS/Mohammed Salem

In the wake of the recent Israeli military operation in Gaza coded “Pillar of Defense” which killed 168 Palestinians, including 37 children and 14 women, as well as six Israelis, Hamas’ popularity has remarkably increased amongst Palestinians. Israel did not win in Gaza, and Hamas was not defeated. As Adam Shaltz exhaustively explains, Hamas “won an implicit recognition as a legitimate actor from the United States (which helped to broker the talks in Cairo) and achieved concrete gains, above all an end to targeted assassinations and the easing of restrictions on the movement of people and the transfer of goods at the crossings.”

While Hamas’ rockets fell in Israeli cities around the West Bank, the Palestinian Authority found itself in a predicament as Palestinians became unprecedentedly fed up and disillusioned with the PA’s negotiation-based policy. The PA had long before realized the U.S. had failed to make good on its promises to grant the Palestinians a state on 1967 borders. The PA has been left completely isolated in the face of its rival’s growing popularity.

Similarly, Ibrahim Habib, a Gaza-based researcher at the Management and Politics Academy, stressed the need to “achieve Palestinian unity at both the societal and political levels,” particularly in light of recent developments. “Israel,” Habib argues, “did the Palestinians a favor by launching its recent aggression in Gaza: not only were Palestinians unified for the first time in their position and in their support for the Palestinian resistance in Gaza, but also it has pointed out the fundamental shortcomings of the Ramallah-based PA’s flawed approach to negotiations. It has become clear for Palestinians that negotiations are not the only avenue the Palestinians can pursue to fulfill their national project and secure their rights.”

However, whilst there is ostensibly much optimism that Palestinian reconciliation is inevitable — and that it is only a matter of time before Palestinians get their act together against Israel’s policies — there seems to be little understanding of what the basis of this reconciliation will be, and how both parties are going to settle their fundamental differences. For instance, another Gaza-based political commentator Mustafa Al-Sawwaf maintains that although several steps continue to be taken both in Gaza and the West Bank which might signal that national reconciliation is in the offing, the most primary steps have been avoided, and there is still much to be done to achieve genuine reconciliation.

“The most important question is that of political freedoms in both Gaza and the West Bank [...] e.g. both governments should release all political detainees in their prisons. Only when such bold steps are taken can we talk about being close to achieving real Palestinian unity.”

The unity deal, many have argued, will be meaningless without the actual reformation of the Palestine Liberation Organization (PLO) and the structuring of an original systematic unified political strategy capable of embracing the diverse political programs of Palestinian factions. Habib refers to this in what he terms, “resistance and political engagement.”

For some, the unity between Hamas and Fatah should not come at the expense of the “Palestinian national project and basic Palestinian rights.” On Habib’s view, the PA bears the brunt of the failure to achieve Palestinian unity. He told me: “It is about time the PA adapted its position to incorporate other political programs like Hamas’ and that  [PA President] Mahmoud Abbas realized the futility of negotiations in a situation of such a huge power imbalance.”

However, many questions remain unanswered with regards to how both Hamas and Fatah are going to settle their differences: Who is making the compromise and shifting its position towards the other? Whilst some argue Hamas and its government are becoming more “moderate” and are likely be co-opted by the PA to join the Oslo framework, others flatly disagree saying that Hamas has been consistent in its position throughout — particularly regarding armed resistance and recognition of the state of Israel.  Others argue that it is the PA which has now realized it has no chance to win against the background of the Arab Spring and the larger changing political landscape in which Hamas has secured unprecedented political gains and popularity than its secular rival.

Mohammed Suliman, 23, is a Gaza-based writer and human rights worker. Mohammed has recently obtained a master’s degree in human rights from the London School of Economics. His writings appeared on different online publications including Al Jazeera English, openDemocracy, the Electronic Intifada and Mondoweiss.