Annick Cojean of Le Monde describes former Libyan ruler Moammar Gadhafi's use of rape in her new book, “Les Proies, Dans le Harem de Kadhafi" ("The Prey, Inside Gadhafi’s Harem"), which will be available in Arabic this month and English next year. 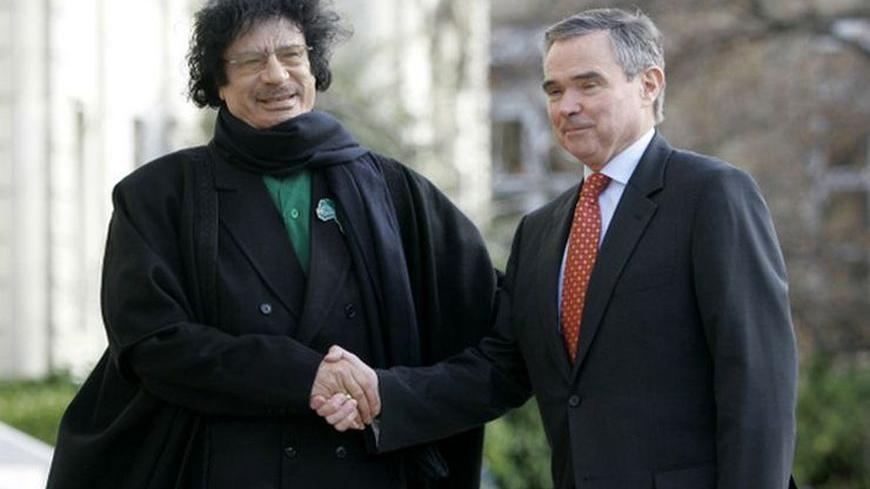 PARIS – Annick Cojean set off for Libya in October last year, just days before former Libyan leader Moammar Gadhafi was killed by angry rebels, to document the role of Libyan women in the revolution.

She soon learned the International Criminal Court and the US State Department have accused Gadhafi’s supporters of using rape as a weapon of war.

She initially could not find victims who would testify, as is often the case when investigating rape crimes.

That is until she met the central character of her new book, "Les Proies, Dans le Harem de Kadhafi" ("The Prey, Inside Gadhafi’s Harem"),  22-year-old Soraya who agreed to share her allegations that she had been sexually abused for five years by Gadhafi himself.

Cojean devotes a third of her book to Soraya’s story, told in the first person. Other direct testimonies are produced and concur with Soraya’s account: Gadhafi allegedly had young women, sometimes teenage girls, kidnapped from their schools and homes and enslaved for years.

The gruesome sex scenes as told by the alleged victims are all about sadistic abuse, including beatings, humiliation and cigarettes burns. Although Gadhafi publicly portrayed himself as pious and ascetic, the girls were often forced to drink hard liquor, smoke and take drugs.

Cojean also details how Gadhafi used sex as a tool to govern and control.

“There were of course his little prey, the young girls he had abducted, but what I found most fascinating besides his sadistic sexuality, was his way of using sex to humiliate and control people,” the author said. “When he wanted to punish or subdue a man, he would take his wife or daughter and rape them.” Gadhafi routinely raped men as well, Cojean said.

Gadhafi used sex to assert his authority and seal business deals with neighboring African countries. Cojean tells the story of an unnamed African president’s wife who arrived late and disheveled at Tripoli airport after spending the night with Gadhafi. Her husband had been waiting for her for several hours.

“I’m not saying that he raped each and every woman he touched. I think a very small portion of them willingly slept with him because it was lucrative and even smaller a proportion accepted because they were fascinated with him,” Cojean said.

In her book, she gathered the testimonies of Gadhafi’s aides, describing the leader’s gifts of diamonds to a selected few women. She said several African countries were economically dependent on Libya’s generosity. “Gadhafi had a lot of money, he financed industries and all kinds of associations and businesses in Africa. To win a big tender with Libya, women could be used as collateral payment,” Cojean said.

Another chilling revelation of Cojean’s book is the center-stage role allegedly played by women in recruiting other women for Gadhafi’s sick pleasure.

His "right-hand man," Mabrouka Sherif, was a woman. Sherif was well known to Gadhafi’s alleged victims and entourage but also to Western politicians and diplomats. A senior French diplomat told Cojean that Sherif regularly came to Paris to do her “shopping,” acknowledging that she was soliciting young women preferably of Arab descent, on the Champs Elysées, to invite them to Libya.

“I wonder about the indulgence and complicity of Western diplomats. Often when he traveled Gadhafi asked to meet with young women in France, in Belgium or Italy.” And Cojean added: “I wonder what [former president Nicolas] Sarkozy exactly knew, especially after he sent his wife Cécilia to Libya to negotiate the release of the Bulgarian nurses?”

Cojean’s book also demystifies Gadhafi’s famous — and much fantasized about — female bodyguards, the Amazons. If some had graduated from the military and police academies and received security training, most were merely recruited for their charisma and beauty, she said. And in their midst were also Gadhafi’s sexual slaves.

Cojean’s main source, Soraya, played Amazon at times; she said she was forced to pretend to guard the Libyan leader on trips. “I was told that all the Amazons regardless of their background slept with Gadhafi,” said Cojean, putting their number at around 60. Speaking to retired or now jailed army personnel, Cojean found that the Amazons were considered nothing more than “Gadhafi’s prostitutes.” They have now all gone into hiding.

Considering Gadhafi’s perverted and violent nature, one can only wonder why his victims or their relatives did not fight back.

“There were several assassination attempts and those who dared speak up were lynched and tortured to death, including one of his cousins whose body was tied to two cars and dismembered. All of it was filmed and the videos shown to discourage others from rebelling,” Cojean said.

In the end, Cojean said Gadhafi’s alleged victims were forced into silence and bought off, because the leader gave them material advantages they could not have dreamt of and because Libya is such a conservative society that these women would not have survived if their secret had come out. “They believed deep down that since harm had been done, they might as well try to benefit and profit from the system. They had lost their virginity and their chance at finding a husband. Many were given flats, cars and got to travel.”

Cojean also said Gadhafi’s victims would probably not get justice. First, because Gadhafi won’t be judged now that he is dead. Second, because “rape is the taboo of all taboos in Libyan society, one that will cost you your life if you tell.” But she said she hoped the release of her book in Arabic would prompt some Libyans, especially women MPs and lawyers, to expose Gadhafi’s secret. She said the new Libyan prime minister, Ali Zidan, had shown sympathy for her investigative work.

Cojean said she remained hopeful about the role of women in post-Gadhafi’s Libya. She said they helped topple Gadhafi and were set on forging ahead socially and politically. “The country is still in chaos with few public services and men vying for power, but women fill in the gap. They organize solidarity chains when medicine is lacking in hospitals, they pushed for schools to re-open and are the ones talking about reconciliation.” Libyans elected a new national assembly last July in the country’s first free poll, in which Islamists and radicals were sidelined. A new constitution is due to be drafted and a fresh election held within a year. “The new constitution will be determining for women and I know of several women judges who would love to be on the drafting committee,” Cojean said.

Sophie Claudet is Europe and Middle East correspondent for Al-Monitor, based in Paris. She previously was Senior International Correspondent with France 24, and also worked for Agence France-Presse English service in the Palestinian Territories/Israel and Egypt.