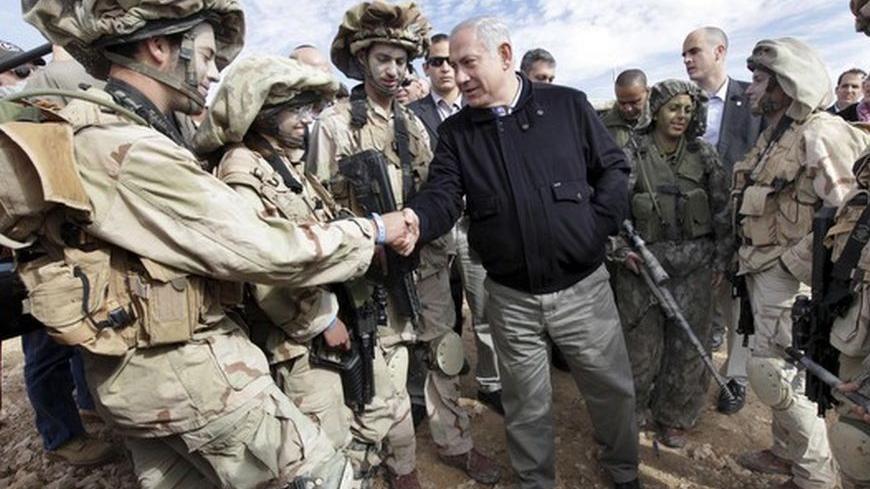 Israel's Prime Minister Benjamin Netanyahu (C) meets with soldiers from the Israeli Defence Force (IDF) during a tour of the Israel and Egypt border in southern Israel January 21, 2010. - REUTERS/Ariel Jerozolimsk

Will Israel attack Iran or won’t it?

Reading Patrick Tyler’s provocative new book, Fortress Israel, it is hard to have confidence that Israel’s leaders will allow much more time for efforts at a diplomatic resolution to the standoff over Iran's nuclear program.

Tyler, a veteran former reporter for the New York Times and Washington Post, retells the history of Israel though its wars and other military operations, noting that Israel has frequently employed massive and disproportionate force as well as covert actions of questionable morality to gain territory, avenge attacks and destroy mortal threats before they can mature.

The book argues, however, that such tactics have cost Israel opportunities for peace, turning the country into a new Sparta — a military fortress “in a steel cage” that is “more isolated than ever” in a volatile region.

Clearly, Israel has had to be tough and agile to survive in a hostile neighborhood. Arab countries refused to accept a UN partition plan and tried to strangle Israel at birth. But the result has been a militarized society in which “it is not clear where the army ends and the government begins,” Tyler says.

Leaders have come largely from the military and derive their legitimacy from their records on the battlefield or in elite commando units. According to Tyler, worst-case scenarios are assumed to be “the only possible outcome.” A constant supply of the best American weaponry, instead of emboldening leaders to seek peace, has enabled them to fight war after war.

Career diplomats who rose to high office — such as the 1950s-era prime minister Moshe Sharett, who sought peace treaties with Egypt and Syria — were blindsided by Israeli military raids into neighboring Arab countries, says Tyler. Sharett was also initially unaware, Tyler writes, of the infamous Lavon affair — in which Israel’s then-defense minister, Pinhas Lavon, sent spies to Egypt to try to blow up places frequented by Americans and British citizens in a failed attempt to persuade Britain not to withdraw troops from along the Suez Canal.

The willingness of Israeli leaders to take such risky and controversial actions forms a pattern. At one point, Tyler quotes the legendary former defense minister Moshe Dayan as telling a group of Israeli officers after the 1956 Suez War that Israel’s power in the region is that of a “detonator … When someone wishes to force on us things which are detrimental to our existence, there will be an explosion which will shake up wider areas, and realizing this, such elements in the international system will do their utmost to prevent damage to us.”

The most effective peacemakers, however, have also been those with the most militant backgrounds.

Menachem Begin, a member of the terrorist Irgun before Israeli independence, gave back the Sinai to Egypt in return for peace in 1979. Yet he exploited that peace to invade Lebanon in 1982 — a war that expelled the Palestine Liberation Organization but gave rise to a much more potent adversary, Hezbollah.

Yitzhak Rabin, a veteran warrior both before and after independence, also took risks for peace, signing accords with a weakened PLO in 1993 and 1994 only to be assassinated in Tel Aviv by a Jewish Israeli extremist in 1995. Since then, no Israeli leader has offered terms that Israel’s adversaries have been willing to accept.

It may be hard for Americans — even after a decade of our own wars — to understand the role of military figures in Israel. Our military has been a volunteer force for decades and we have not had a combat veteran as president since George H.W. Bush.

Although Israel’s founding figures were not all career military men and women, since the 1970s every Israeli prime minister has been a former general or a veteran of a pre-independence militia — with the exception of Shimon Peres, who shared power with Yitzhak Shamir in the 1980s and briefly succeeded Rabin in the 1990s, and Ehud Olmert, who took office when Ariel Sharon fell into a coma after suffering a stroke in 2006.

This background, Tyler argues, predisposes Israeli leaders to seek military solutions. Even civilian prime ministers use military means to prove that they can deliver security to a frightened people. Thus Peres unleashed “Operation Grapes of Wrath” in 1996, inadvertently killing hundreds of Palestinian civilians in Lebanon in an effort to stop Palestinian suicide bombings in Israel. Olmert attacked Lebanon again in 2006 and Gaza in late 2008, killing thousands and destroying huge amounts of property to gain a respite from rocket attacks and kidnappings of Israeli soldiers.

Tyler does an excellent job describing the US-Israeli relationship as one in which the tail has frequently wagged the dog. Only Dwight D. Eisenhower, who forced Israel to withdraw from the Sinai in 1956, and the first President Bush, who withheld loan guarantees and kept Israel out of the 1991 Gulf War, have stood up to Israel in a serious way, Tyler suggests.

Prime Minister Benjamin Netanyahu has been particularly aggressive, if not always successful, in his efforts to manipulate US leaders. Tyler quotes former US President Bill Clinton as saying that Netanyahu, who was also prime minister in the late 1990s, “thinks he is the superpower and we are here to do whatever he requires” — a telling comment in view of current tensions over whether to set “red lines” for attacking Iran.

Playing on American Jews’ fears of another Holocaust, as well as Cold War competition with the old Soviet Union and domestic US politics, Israeli leaders have wrangled billions of dollars in aid from the United States. But that has not provided them with a lasting sense of security.

Tyler’s history ends before the Arab upheavals of the past year — which have undermined Israeli relations with Egypt, in particular, by empowering a vehemently anti-Israel public.

Interesting, Tyler quotes Defense Minister Ehud Barak — who spent time in Iran in the early 1970s when it was ruled by the pro-Israel Shah — as saying in 2008 that Iranians would eventually overthrow the Islamic Republic “like the Russians did to the communists.”

But Barak, a former prime minister and legendary leader of Israel’s elite commando unit, the Sayeret Matkal, does not seem to grasp that by attacking Iran, Israel or the United States might consolidate the Iranian regime and destroy the opportunity for regime change — as well as a peaceful resolution of the nuclear issue.

Unfortunately, as the old saying goes, when all you have is a hammer, every problem looks like a nail.

Barbara Slavin is Washington correspondent for Al-Monitor and a senior fellow at the Atlantic Council. She tweets as BarbaraSlavin1.