Bassem Sabry reviews what Egypt won and lost in 2012. 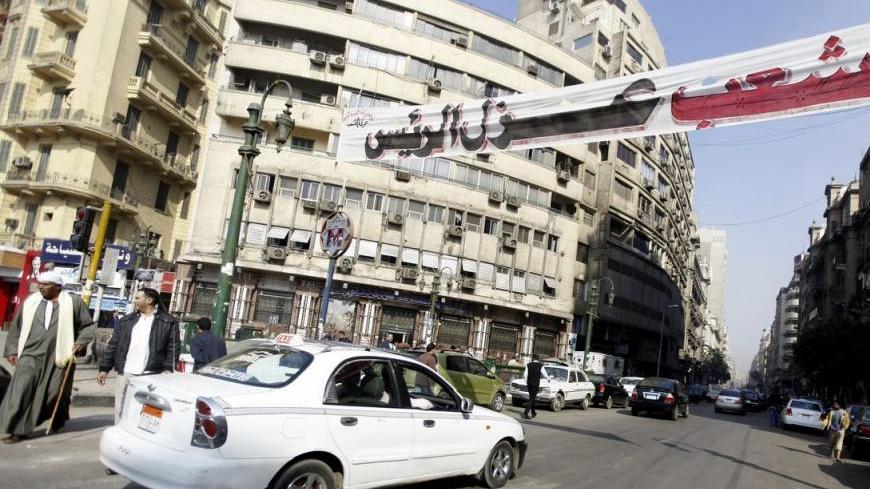 People and vehicles travel under a banner that says "People isolate President" at Tahrir Square, after protesters opened it to traffic, in Cairo, Dec. 30, 2012. - REUTERS/Amr Abdallah Dalsh

It’s the end of 2012, a long and tumultuous year in Egypt, one in which events could easily be spread over a decade and still make it an utterly exhausting one. At perhaps the year’s political pinnacle, Egypt has just adopted a new and extremely controversial constitution that garnered less than 63.8% in a national referendum of low turnout (had the opposition pressed the case for a minimum victory threshold of 66-70%, the constitution would have fallen), following a protracted and bitter political crisis that is anything but effectively or officially over. Instead of this new constitution bringing national jubilation and a modicum of unity, the country appears to be locked in a dangerous political standoff and engulfed in what feels like a pervading sense of bleak and tense turmoil, one that you could feel just walking in the streets.

Out of all the involved parties, President Mohammed Morsi has arguably suffered the biggest political damage throughout the recent political crisis. He appeared for quite some time to be better settling into power and becoming relatively more capable in handling his role, which culminated in his local and international hailing for Egypt’s role in brokering the Gaza cease-fire. It was only a day later, however, when he was dubbed a “dictator” and “Mursilini” following the constitutional declaration in which he — among other things — granted him absolute powers and protection from judicial oversight. Throughout the crisis, the president experienced group walkouts and public hints of resignation and disapproval from members of his advisory team and administration, a direct and utterly painful confrontation by a loud and significantly united judiciary, has unintentionally led to the astonishingly instantaneous and once unthinkable unity of the opposition as well as a massive popular outpour in the streets against him. The president was eventually forced to rely (often indirectly) on the Islamist base to solidify his position, used all-too-familiar language of foreign conspiracies seeking to harm the country, effectively obliterating months of attempts at being at the heart of a wider united national umbrella and reconciliatory rhetoric. Adding to that an increasingly unpopular government and a slew of controversial (then quickly retracted) decisions, an ailing economy, and the constitution garnering in the referendum what is arguably an insufficient mandate, the president has thus far lost a golden and virtually irreplaceable unique chance emerging as a national leader who managed to bring Egyptians together and bring a unified country forward.

The Muslim Brotherhood has also apparently lost some significant popularity among the less ideological segments of Egyptian society, which is pretty damaging in a country primarily composed of yet-to-be-involved and swing voters. A look at referendum figures, especially declining voter turnout and final results, suggest that the governorates with higher literacy, living standards and internet penetration had higher “No” vote rates than others, all valuable demographics that the Brotherhood cannot afford to lose. Instances of sectarian language, confrontational power demonstrations that appear to have alienated many moderates and Christians (the “Legitimacy And Sharia” demonstration by Cairo University), the attack on the opposition sit-in by the Ettihadeyya Presidential palace, the threat of an effective confrontation with an ongoing Tahrir sit-in, as well as the growing ties between the Brotherhood and the Salafists have severely hurt the Brotherhood’s efforts at projecting the image of a moderate or progressive Islamist group that wants to reach a genuine national consensus. Political attacks against the Brotherhood, citing what they say are a string of reversed promises, appear to have also done some considerable damage to its and the president’s credibility. The Brotherhood is still expected to be the biggest single political block in the coming Parliament, but some drop from their 2012 domination is thus far expected.

The opposition has lost both the battle hoping to prevent this constitution from reaching a referendum, at least as rapidly as it did, and what was a significantly impossible effort towards getting the “No” vote to win in the referendum (especially within a short time window). Both defeats have led to a currently brooding, somewhat deflated and negative mood within the opposition and their supporters. In addition, the opposition appears to have constructed a negative self-image for many swing voters. For them, the NSF increasingly appeared like a group of ageing men who simply object to everything without offering real alternatives, and were perhaps less interested in dialogue and resolving the crisis than in trying to unseat Morsi in order to gain power themselves, or were just rather too engrossed in their enmity with the Islamists rather than working on finding a solution. Even within its support base, some have had problem with the composition of the National Salvation Front (for example, the presence of Amr Moussa was troubling for some of the more puritan revolutionary base) as well as the political management of the crisis (especially the post-Ittihadeyya sit-in part), while some inability by the NSF to be in real command of the size of street and popular action that is their side has been visible. Still, the NSF has significantly managed to act as a compass for much of the anti-constitution, anti-Brotherhood and the “Civic” movement, and is the natural parliamentary nominee for this growing political movement. On another positive note, the opposition is more united than ever before, their organizational structures have worked together closely during the referendum and the political crisis, and the nucleus of a real civic opposition has finally emerged. Of course, they face serious challenges, which I outlined in a recent article in greater detail, chief of which remain the lack of a clear identity and attractive messaging, and still-nascent real ground operation.

The judiciary has also been (self-)catapulted into becoming what is almost a full political actor, with the recent events placing them in opposition to the Brotherhood and the president, and with the Judges’ Association and its present Ahmed El-Zind at the heart of this movement. El-Zind and the JA have managed to encourage a judicial majority boycott of the referendum and a partial shut down of the judicial system in protest, hurt the President’s credibility to some extent,  and have — till now — managed to reduce Morsi’s appointed prosecutor-general to lame-duck status, and forcing him to resign once (before going back on that resignation.) However, some are now speculating that the judiciary is likely to eventually witness a direct confrontation, in retribution, by an Islamist-majority parliament and the presidency, which could end up backfiring if it did actually take place. One current judiciary casualty has been the Supreme Constitutional Court, whose changed composition and powers in the new constitution are claimed to have been designed intentionally to punish the court for appearing to be biased against the Islamists.

Perhaps the two bigger mysteries are the army and the Salafists, individually. The effect of the events of the year and their first meteoric foray into the public sphere on the Salafists as a political block remain hard to determine, especially with the Nour party witnessing a wave of resignations — including the party head himself — and the creation of newer parties, let alone a new party founded by Salafist former presidential candidate and local firebrand Hazem Abu-Ismail. Some argue the shakeup and the year’s aftermath should eventually lead to a smaller Salafist support base, while others alternatively make the case that the overall results would actually lead to larger, more diverse and more invigorated base — it’s still hard to tell though. The army, on the other hand, is an even bigger question with army head Gen. Abdel-Fattah El-Sisi remaining a man of relatively few words and undetermined personal ideology. Indicators appear to suggest the army is not excited about playing a renewed large public role in politics, but is deeply unsatisfied with the current situation. The extent of their discontent eventually led to their acting in an apparently independent manner within the recent crisis, issuing warning statements and even attempting to publicly bring the conflicting parties together in a de facto mediation effort, which were both an effective blow to the presidency as a theoretically higher institution and a semi-surprising reminder to everyone that it is still an independent force to be reckoned with.

But the biggest casualty of all this is the Egyptian citizen himself. Following the post-revolution euphoria that ensued in the early months of 2011 and the renewed hope following Morsi’s appointment, Egyptians appear to have grown increasingly exhausted with the political process and most — if not all — of its actors, frustrated with how the country is run, more and more worried about livelihood, and public utterances of reminiscing of the days of Mubarak have been profoundly increasing. After most Egyptian pundits spent 2012 worrying about Egypt turning to the “Pakistani Model,” it was the Pakistani president who ended this year by warning that the “Egyptian Model” would not be allowed into Pakistan. If I had to sum up the end, and much, of 2012 for Egypt: the country is on a horribly wrong track.