Could Violence in Egypt Spin Out of Control?

Bassem Sabry writes that he's never been more worried about Egypt since its revolution than he is right now. 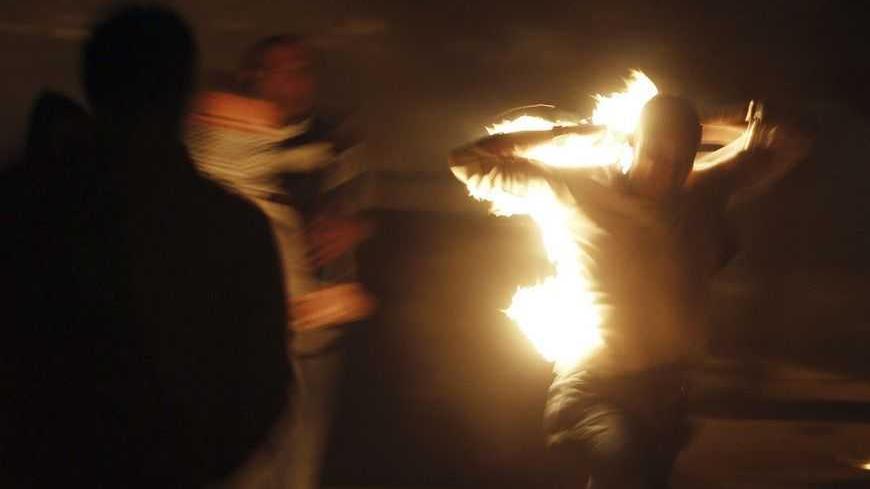 A protester who opposes Egyptian President Mohammed Morsi runs as Molotov cocktails burn him during clashes with riot police along a street which leads to the Muslim Brotherhood's headquarters in Cairo's Moqattam district, March 22, 2013. - REUTERS/Amr Abdallah Dalsh

My articles over the last two months have been somewhat brushed with an alarmist tone that is characteristically alien to my normally dry writings. But never since February 2011 have I been more genuinely worried about Egypt than I am right now. The reason for my profoundly increased sense of worry is that the potential for a wider outbreak of politically induced violence has become more alarming than ever before.

A few days ago, clashes erupted between protesters, Muslim Brotherhood members and policemen by the Brotherhood’s headquarters atop the Muqattam hill. More than 250 were injured, according to one report, some of whom were grievously wounded. Some of those who came to the protest appeared to have been set on clashing from the start, while others were perhaps drawn into them through the heat of the events. While we’ve become no strangers to images and stories of violence, there was nonetheless something this time that was just more personal in all the violence.

Later that same night, some on the other side reciprocated by threatening escalation, with former presidential candidate and The Flag party founder Hazem Abu-Ismail seemingly suggesting a siege or a protest. Later, Abu-Ismail and others stated they would not protest, but some Islamist protesters did, blocking employees from entering for sometime, harassing guests and presenters (some reports claim “assault” of certain presenters and attempts at breaking into the city), and clashing enough to require tear gas. The Islamist protesters displayed a genuine hatred for many of the private media outlets and figures which were largely aligned with the opposition, and saw them intentionally promoting upheaval due to what they see as a profound hatred to anything Islamist. Those supporting them on social media were not a few, and shared much of their sentiments.

The language on social media and in real life from many of those opposing both ends of the political spectrum was, and continues to be, more troubling than ever before, and I have been quite the close follower over the last two years. There is greater hate in the language used. A more profound enmity. A more belligerent attitude. On social media, public threats or embraces of violence as inevitable or desirable were more common and visible than before. Some also speak in a more sectarian tone, and approach this as an outright religious conflict. Many of those who tried to speak calm were either met with a “it’s too late” response, if not outright ridicule or criticism, or even bashed altogether. And the private media’s conduct, the defense of its freedom being one of my main dedicated causes, at times appeared to be on the other side of being constructive and professional.

The Prosecutor-General’s office recently summoned multiple opposition activists for investigations over alleged incitement over social media of the violence near the MB building in Moqattam. But other than being seen by some as politically driven and lacking in real evidence (one appears to be investigated for a twitter “Mention” he received), the prosecutor’s moves were further criticized as biased for not having summoned anyone over violence threatened or perpetrated against the opposition since November.

The potential for larger-scale violence has been increasingly brewing in Egypt for the past while. The police’s reputation is at one of its lowest levels ever, many feel little sympathy towards it in the event of clashes and feel comfortable assigning it responsibility for any violence regardless, and clashes with the police relatively remain a common phenomenon, most recently in the Suez Canal cities. And recently, following the court’s verdict in the Portsaid Stadium Massacre, violence erupted that saw fire set off in the Egyptian football federation, the Police Club in Cairo, and even a fast food restaurant that was allegedly owned by a Brotherhood member.

Particularly, many cite the day pro-MB protesters (supposedly MB members) directly attacking a peaceful sit-in by the Ettihadeyya presidential palace in December as the day wherein direct violence and full enmity between the once united factions of the Egyptian revolution became more acceptable.

Since then, many MB offices across the country have been torched or ransacked, and opposition parties have been on high alert for potential violence against their assets as well, with Al-Wafd party’s historic headquarters already subjected to an attack in December. Protesters and Brotherhood members have directly clashed on occasion as well, including recently in Al-Mansoura and more than a week ago also by the Brotherhood’s building in Muqattam, when a woman was slapped quite forcefully by what appeared to be a Brotherhood member in what started a large controversy and helped ignite the following protest.

And with a lack of trust in the police, the judiciary and the public prosecutor (who was handpicked by President Mohammed Morsi amid protest by the opposition), many find that retribution and action outside official channels as the only means possible. One more visible example of such is the recent emergence of the Black Bloc, a group of black-clad and masked anonymous youth who resort to radical means against Islamists and the police state.

Black Bloc members, basically anyone who dons a black outfit and mask, have since perpetrated a series of violent and vandalistic acts, supposedly including setting Ayman Nour’s party HQ on fire. Their emergence signals not only willingness of more people to undertake violent and radical acts, especially the youth, but also that violence could turn into a fashionably branded and more appealing affair. To make matters more troubling, a group of Islamists announced the reprisal formation of The White Bloc, an opposing Islamist group whose actions, if any, are yet to be seen.

A group of independent figures recently attempted to pull the breaks on the whirlpool of escalation and violence, and provided momentum for what became known as the Al-Azhar Document For the Renunciation Of Violence, and did manage to bring together NSF, Islamist and Independent figures to sit down together and sign it in a public ceremony. The document was meant also as pressure to also bring together the sides of the political conflict to break the cycle of no dialogue. But many publicly shot down the document, especially on the pro-opposition side, seeing that it allegedly equaled between victims and assailants, as the attack on the Ettihadeyya sit-in was still echoing fresh. More than a month later, nothing seems to have come out of any of this.

What is even more troubling is that the country’s political forces often seem ambivalent about the growing scare of wide political violence. Sure enough the Muslim Brotherhood and the NSF are both publicly renouncing violence to be sure, and they’re both making effort to control their base, but also qualify that with exchanges of blame. The Brotherhood in particular appears to be in growing pains to control a base in which many are fuming and want to reprise against what they see as organized pro-opposition violence against them.

The opposition denies any of the violence is organized or that it is being perpetrated by party members, which indeed appears to be true (the opposition’s official organized base is also much smaller than that of the Islamists, and many are against the Islamists but not necessarily pro the existing opposition). But many Islamists argue back that the opposition’s rhetoric in part provides a degree of moral and political cover to the violence. The problem here is that with rising anger on both sides, increasing radicalization and polarization, and a worsening economic situation that could explode at any second (especially as subsidy reform kicks in), it’s fair to suggest violence of a larger scale could erupt that would be beyond the immediate control of anyone, perhaps not too far from now.

Most worrisome is that some seem to hope for something of the sort, whether as a pretext for an army intervention to take power or as a pretext for sweeping moves against the opposition. Either way, it would be a disaster for Egypt. Strangely enough though, it is also appears most likely that the country would just limp along like this for months until elections, which would then open another set of problems.

The downward spiral could nonetheless be stopped, and the sense of continuous worry and dread many of us feel could end. Egypt quite urgently needs an immediate and sweeping national reconciliation deal. Its political forces need to create mechanisms, accords and a legislative agenda that could politically and economically stabilize the country for at least a few of years. National trust in the judiciary as a neutral arbitrator needs to be restored. Anger against the police needs to be addressed. And justice for all the recent violence is required.

Assuming none of the country’s political forces are pushing toward one of the several radical scenario that aim to erase the other from the map, they mainly have one of two options: Reconcile now, or regrettably reconcile after something horridly indelible takes place.