No Arab Spring Without the 'Flower’ of Women’s Rights

Nearly two years after the start of Arab Spring uprisings, Arab women are facing the reality that toppling dictators was only the beginning of their fight for freedom and equality. Barbara Slavin reports from a recent conference, during which a group of young Arab women activists discussed and debated these challenges. 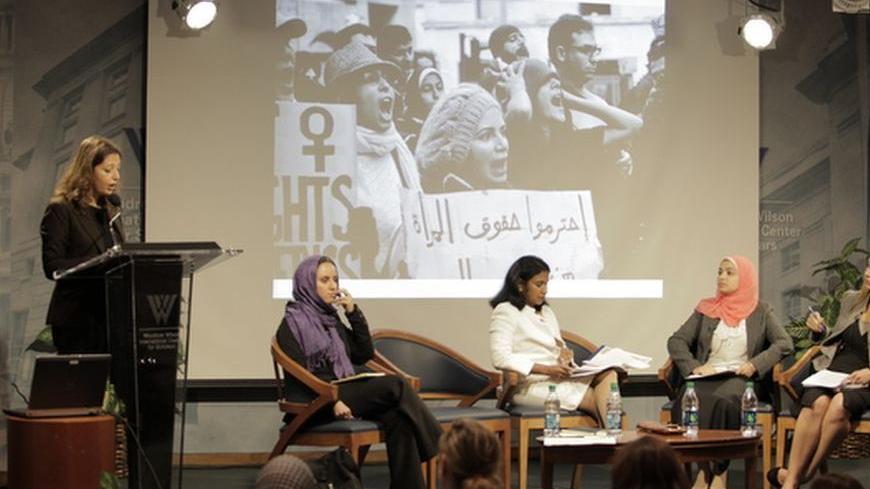 Nearly two years after the start of uprisings across the Arab world, Arab women are confronting the reality that toppling dictators was only the beginning of their fight for freedom and equality.

In Tunisia, Libya, Egypt and Yemen, women are battling deep-seated conservative cultural norms and efforts by newly empowered Islamic parties to deprive them of the rights granted to them by prior autocratic regimes. Women in countries not yet subjected to revolts are also seeking to benefit from the democratic upheavals to improve their social and legal standing.

On Tuesday, Oct. 2, at the Woodrow Wilson International Center for Scholars, a group of young Arab women activists discussed these challenges and debated how best to deal with them. There were heated disagreements about the role of Islam — one participant called “Islamic feminism” an oxymoron — and about whether it was better to focus on improving the general welfare rather than on women’s rights alone.

Clearly, Arab women activists are going through a process of trial and error, as are their societies at large, now that the excitement of revolution has faded and the hard work of building democracy and restoring stability continues. Here are some snapshots of where they stand.

Dalia Ziada, executive director of the Ibn Khaldun Center for Development Studies and the recipient of numerous human rights awards, said that she had erred by not insisting on heading a ticket for parliament in the Egyptian elections last spring and allowing a less well-known man to take the spot.

Ziada said women need to work on several fronts, seeking to shape new laws and constitutions and to increase their economic independence, but also to change the mindsets of men and women at the grassroots level. Otherwise, she said, the Arab Spring will have failed to reach its potential.

“No spring without flowers,” she said, referring to women’s rights.

Omezzine Khelifa, an adviser to the minister of tourism and member of the Young Socialist Democrats, said women have “moved from state feminism to political feminism,” referring to the top-down reforms imposed by secular autocratic regimes.

In Tunisia, she said, women have already faced down a number of “perils,” including efforts to enshrine Shariah as the unique source of law and to exclude references to human rights and international conventions protecting women from a new constitution. Despite a veneer of modernism and a bigger representation of women in political parties than in other Arab states, she said Tunisian women are confronting a number of challenges. She referred to the case of a woman who was raped by three policemen after they found her with her boyfriend.

“The fight is still ongoing,” she said.

Rihab Elhaj, co-founder of the New Libya Foundation, an incubator for civil-society groups, said the picture was mixed following the demise of what she called the “charade” of feminism under the late dictator Moammar Gadhafi.

Since Gadhafi was overthrown, she said Libyan women have become “increasingly marginalized in social spaces” and are facing “incessant harassment” that leaves them “no choice but to swallow their pride or stay at home.”

Women have been kidnapped by militias, including two who were working in a workshop on the role of women in the constitution-drafting process, and were held in Benghazi by militants for nearly a week. Another woman was shot and killed by a member of a radical militia who mistook her for a candidate for parliament, she said.

At the same time, said Elhaj, women are starting businesses and civil-society groups and finding employment with foreign companies and NGOs that view Libyan women as “on average better educated and more disciplined than their male counterparts.” She said women were behind recent demonstrations in Benghazi after the murder there of US ambassador Chris Stevens and three other Americans last month. The demonstrators demanded that the government disarm independent militias, a process she said began two days ago (on September 30) with an arms-collection program.

While men won 119 of 120 directly elected seats in parliament, 32 of 80 seats reserved for political parties went to women, she said. “We are still optimistic [that] we will close the door to inequality.”

Fahmia Al Fotih, a freelance journalist who has also worked for the UN Development Program, said that “it’s not spring for women in Yemen.”

Only three women serve in the interim government, and they hold the same positions — ministers of human rights and social affairs and one slot in the prime minister’s office — that they did before former president Ali Abdullah Saleh was overthrown.

Six of 30 members of a technical committee that is preparing for a national dialogue at the end of the year that is to lead to a new constitution are women, she said, and several have been threatened with death for taking part in the political process.

“The future of women in Yemen is still blurry,” she said, and the country is overwhelmed by economic problems. She cited a recent survey by Oxfam that showed that four out of five Yemeni women say their lives have gotten worse over the last 12 months. More than 70% of Yemeni women are illiterate and their biggest concerns, she said, are access to “food, security and jobs.”

Although the Syrian revolution is far from over, Honey Al-Sayed, producer of an upcoming radio show called “Souriali Radio” and the former host and producer of the show “Good Morning Syria,” said Syrian women are focusing on retaining the rights they have enjoyed since before the Assad regime and learning from the mistakes of other Arab states.

“The role of Syrian women needs to be defined today” before a new regime takes over, she said. “Our real issue is not toppling the regime, it’s choosing the right one” to follow.

Hala Al Dosari, a PhD candidate in health-services research, said Saudi women have been experiencing the Arab Spring vicariously through social media but have also taken actions of their own. She mentioned a woman who filmed an encounter with a religious policeman who tried to expel her from a shopping mall because she was wearing nail polish and lipstick. Another woman, Manal al-Sharif, videotaped herself driving — which is against Saudi law — and was arrested but quickly released.

Saudi women are also digging into the Quran and other Islamic sources to find justification for greater equality. We can use “Shariah to combat the oppression of Shariah,” she said, blaming discrimination on incorrect, misogynist interpretations of Islam.

Hanin Ghaddar, a public-policy scholar at the Wilson Center and managing editor of the website NOW News, said religion was the problem and that the only solution was to separate mosque and state. “Islamic feminism is a contradiction in terms,” Ghaddar said.

While many outside the region view Lebanese women as liberated because they “can wear short skirts and dance all night in pubs,” in fact, Ghaddar said, they have fewer legal rights than in other Arab countries.

Lebanese women cannot marry in civil ceremonies or pass on their nationality to children if they marry foreigners. Instead of one status law to determine their rights, they are subjected to the rules of 18 religious sects that all discriminate against women, she said.

Both Sunni and Shiite leaders are opposing a bill in parliament that would criminalize marital rape and allow women to seek restraining orders against abusive male relatives. “The Arab Spring will not be complete … without a clear separation between state and religion,” she said.

Haleh Esfandiari, an Iranian American who directs the Middle East Program at the Wilson Center, said it was crucial that Arab women not repeat the experience of Iran, where the 1978–79 revolution led to a drastic regression of women’s rights.

“A Persian expression comes to mind: ‘the person who was bitten by a snake is scared of a black rope,’" she said. “Having witnessed what happened in Iran, I shared my anxieties with my Arab friends, men and women. I was told time and again by them ‘we are not Iran.’ They were right, no two countries are alike.”

Barbara Slavin is Washington correspondent for Al-Monitor and a senior fellow at the Atlantic Council. She is a former scholar at the Wilson Center, where she wrote a book, Bitter Friends, Bosom Enemies, about the US and Iran. She tweets at BarbaraSlavin1.