Women are in danger of losing social, political and economic gains made under previous regimes in the aftermath of the Arab Spring, writes Barbara Slavin. At a recent conference, experts presented a mixed picture in which setbacks for Arab women outnumber gains. The problem is not that Islam is anti-women, but rather male chauvinism in its interpretation. 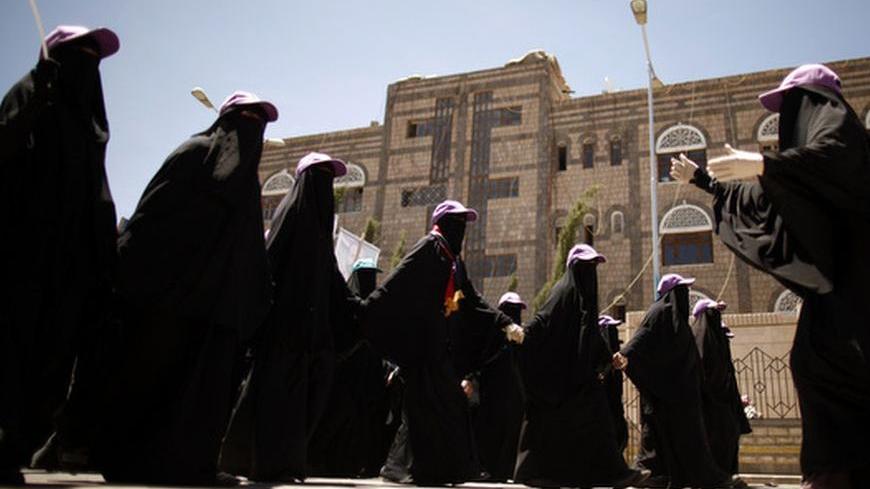 A protest leader gives directions to fellow protesters as they march during a demonstration in Sanaa May 10, 2012. - Reuters

Women have participated prominently in the popular protests that have swept the Arab world in the past 15 months, but are in danger of losing social, political and economic gains made under previous regimes.

Activists and experts studying transitions in Egypt, Tunisia and Libya as well as developments in the Gulf and in Iraq since the fall of Saddam Hussein say that Arab women need to be vigilant and make sure that the rise to power of Islamist political parties does not come at their expense.

“We must safeguard the rights women have made before the Arab Spring,” said Haleh Esfandiari, director of the Middle East program at the Woodrow Wilson Center for Scholars. “They cannot be revisited.”

The topic of women’s rights — and the question of whether Islamist parties are inherently misogynistic — has ignited a heated debate among Arab women.

At a conference at the Wilson center on Monday, May 14, experts on these issues presented a mixed picture in which challenges and setbacks for Arab women have outnumbered gains:

Not all of the recent news from the region has been negative for women. Elections last week [May 10] in Algeria increased female representation in parliament from 7% to 31%, the highest in the Arab world and higher than in many Western nations — including the US, where women make up less than 17% of the House of Representatives and hold 17 of 100 Senate seats.

Two countries — Tunisia and Morocco — have withdrawn reservations to the Convention on the Elimination of All Forms of Discrimination against Women (CEDAW), a UN treaty that the US has yet to adopt.

But in Egypt, “when you say CEDAW, it’s an obscene word,” said Moushira Khattab, a public policy scholar at the Wilson Center and former ambassador and minister in the Egyptian government. Opponents of the convention say it encourages immoral behavior such as “extramarital relations and children born out of wedlock,” she said.

Most of the participants in the conference advocated continuing quotas for female participation in parliament and other government institutions as a temporary step, even while acknowledging that some of the women elected under such quotas — particularly from ultraconservative Islamist parties — might not be champions of women’s equality with men.

Quotas “bring the face of women into the public domain” and accustoms society to women in powerful positions, Al-Rahim said.

Without quotas, speakers noted, you can get results like those in Egypt where only 10 women are in the new parliament and most are members of Islamist groups.

The speakers — most of them veteran campaigners for women’s rights — acknowledged that their cause has been tainted by association with previous regimes in which the wives of rulers promoted progressive views on women’s role in society — so-called “state-sponsored feminism” — that largely impacted a privileged elite.

In countries such as Tunisia, a "nongovernmental organization” created by the state to aid women in rural areas did little and became repositories for cronies of the wife of dictator Zine el-Abidine Ben Ali, said Lilia Labidi, visiting research professor at the National University of Singapore and former minister of women’s affairs in Tunisia’s transitional government.

Rola Dashti, a former member of the Kuwaiti parliament and chairman of the Kuwait Economic Society, warned that transitional governments in countries such as Egypt might seek to scale back hard-won personal-status laws granting women equal rights in family matters.

“Because they will not deliver on economic issues, they will use women’s issues to polarize society,” Dashti predicted.

The speakers — none of whom wore headscarves — said it was important to engage both women and men in Islamist parties and to distinguish Sharia law from the conservative traditions with which it is sometimes conflated in the Arab world.

Youthful populations throughout the region are seeking to become more connected to the outside world and there has been progress even in Saudi Arabia, the most conservative Arab state, since the Arab uprisings began.

A group of more than 60 women who violated the law against women driving last year faced “very soft” punishment, said Caryle Murphy, a scholar at the Wilson Center who recently spent three years in the kingdom. Women have been promised the right to vote in municipal elections in 2015, and are likely to be appointed to the majlis that advises the king and are no longer being harassed by religious police for failing to cover their faces, she said.

The cause of women in the region would face fewer obstacles, however, if more liberal religious scholars — male as well as female — were able to broadcast their views.

The problem, Al-Rahim said, is not that “Islam is against women” but that “we have a serious problem of male chauvinism in the interpretation of Islam.”

Barbara Slavin is Washington correspondent for Al-Monitor and a senior fellow at the Atlantic Council. She is a former scholar at the Wilson Center, where she wrote a book, “Bitter Friends, Bosom Enemies,” about the US and Iran. She tweets at BarbaraSlavin1.