Egyptian President Abdel Fattah al-Sisi has made some gestures toward women, though his overall human rights record remains controversial. 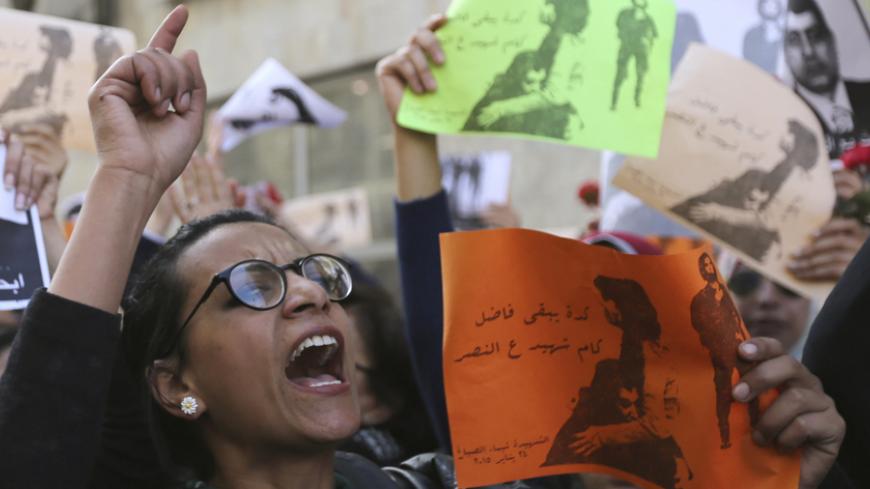 A protester chants anti-government slogans during a protest by women at the same location in central Cairo where activist Shaimaa el-Sabbagh was killed during a protest, Jan. 29, 2015. - REUTERS/Mohamed Abd El Ghany

It takes a certain amount of fortitude to defend the government of Egyptian President Abdel Fattah al-Sisi in Washington these days, given the widespread criticism here of his record on human rights.

But in the area of gender equality, Egypt is making progress, according to Moushira Khattab, a distinguished former ambassador to South Africa and the Czech and Slovak republics who was instrumental in gaining passage of a law against female genital mutilation in Egypt in 2008.

Speaking at the Woodrow Wilson International Center for Scholars on Feb. 10 and in a subsequent interview with Al-Monitor, Khattab pointed to the Jan. 26 decision by an appellate court to convict a doctor, Raslan Halawa, of involuntary manslaughter in the death of a 13-year-old girl, Soheir al-Batea, as a result of complications following genital cutting. While Halawa's sentence was relatively light — two years in prison with hard labor — the conviction “was a big victory for women,” Khattab said, in a society where 66% of women still endure this practice.

According to Khattab, women’s rights regressed under the administration of President Mohammed Morsi, who was ousted in 2013 by the military backed by a popular movement. Sisi, Khattab said, has signaled his support for women by appointing one as his national security adviser, naming three women deputy governors and visiting the female victim of a sexual assault as his first act after taking office last June.

Sisi “spares no occasion to recognize the efforts of women,” Khattab said. “Women are particularly supportive of Sisi … and I think he’s determined to pay back women by restoring their rights.”

However, the woman appointed national security adviser — Faiza Abou el-Naga — has a record of suppressing independent human rights organizations, accusing them of being tools of foreign governments. Her appointment was also interpreted as a slap against the United States and an effort by Sisi to rebalance Egyptian foreign policy, as also evidenced by his welcoming of Russian President Vladimir Putin to Cairo on Feb. 10.

Moreover, it is hard to separate women’s rights from human rights and there, the Sisi record leaves much to be desired, said Michelle Dunne, an Egypt expert at the Carnegie Endowment who was expelled by Egyptian authorities when she arrived at Cairo airport to attend a conference last year.

While Khattab expressed hope that a large number of women would run in parliamentary elections this spring and that overall turnout would be robust, Dunne noted that several important Islamist and secular liberal parties — including the Dostour party, which is led by a woman — have decided to boycott the vote.

The Muslim Brotherhood’s Freedom and Justice Party has been outlawed, although Khattab said Brotherhood supporters could still run as individuals. Under the current electoral law, 80% of the seats in parliament will go to individuals and 20% to party lists. While there is no overall quota for women, Khattab said that three women must be included on each party list. She predicted that women would comprise at least 9-10% of the next parliament and as much as 12-15%.

Major international organizations that usually monitor elections are going to be absent, however, and it is hard to imagine “a free media atmosphere,” Dunne told Al-Monitor, given the sycophancy lately expressed toward Sisi by the Egyptian press. She noted the growing polarization of Egyptian society between supporters of the government and those sympathetic to the Brotherhood and banned leftist groups that led the January 25 Revolution against President Hosni Mubarak.

Although Egypt recently freed an Australian working for Al Jazeera, two of his colleagues remain jailed along with thousands of other political prisoners. More than 2,000 people have died at the hands of police in Egypt since 2013 and the country has been plagued by terrorist attacks by Islamist radicals.

In one of the most shocking recent incidents, a young female poet, Shaimaa el-Sabbagh, was shot and killed Jan. 24 while walking to Tahrir Square to lay flowers in honor of those who died in the 2011 revolution and subsequent protests.

Following a public outcry, Sisi offered condolences to the young woman’s family and promised a thorough investigation. Press reports Feb. 10 said that police have identified Sabbagh’s killer but did not say who that person was.

“Whoever has committed this will be put on trial and brought to justice,” Khattab told Al-Monitor.

Asked about the high level of violence that has afflicted Egyptian society since 2011, including the increase in sexual harassment of women, Khattab said “every Egyptian asks this question” and conceded that the authoritarian nature of society under Mubarak may have bottled up much hostility and frustration.

“At the end of the day, it’s good to have everything out and deal with it rather than keep it suppressed,” she said.

Looking back over the wild swings in Egyptian politics over the past four years, Khattab said, “Egyptians now are drained” and are looking for a return to stability and law and order. “It’s a transitional period and life is still not 100% normal,” she told Al-Monitor. “We’re still living a revolution and it’s not over yet.”