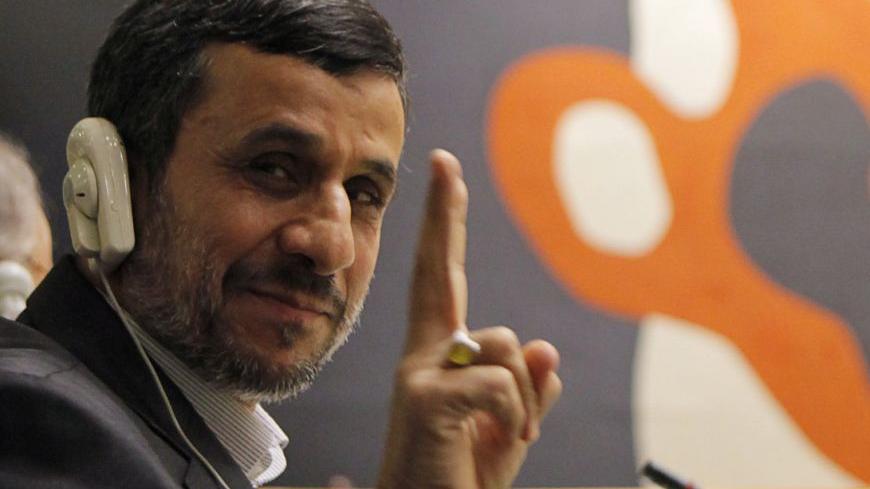 Iran's President Mahmoud Ahmadinejad flashes the peace sign during a meeting of the General Assembly at the United Nations headquarters in New York, Sept. 24, 2012. - REUTERS/Eduardo Munoz

Iranian President Mahmoud Ahmadinejad is seeking to establish a new diplomatic contact group on Syria in Iran’s latest diplomatic bid to end what he described as “tribal warfare” in Syria.

In response to a question from Al-Monitor, Ahmadinejad, speaking at separate events to journalists and policy experts in New York, said that Iran’s latest diplomatic initiative results from the summit of the Non-Aligned Movement (NAM) last month in Tehran. Iran holds the NAM chairmanship until 2015.

Ahmadinejad described the fighting in Syria as “tribal warfare” and said that if one side defeats the other, Syria will be subject to “insecurity and instability for decades to come” and that “extremist groups” will be strengthened. He stressed that the desired outcome in Syria is a national dialogue or accord that allows the Syrian people to govern themselves and choose their own leaders through elections.

Asked about a statement by Maj. Gen. Mohammad Ali Jafari, commander of the Islamic Revolutionary Guards Corps (IRGC), that the IRGC was providing military support to the Syrian government, Ahmadinejad emphasized that this has already been “officially denied."

Ahmadinejad warned against the “intervention and meddling” of outside powers, who are “not qualified to choose” Syria’s leaders.  He said Iran is not taking sides in the Syrian conflict, sidestepping a question whether Iran was committed to Syrian President Bashar Al-Assad remaining in power, and that Iran is rather seeking a process that brings the parties together for a transition leading to elections.

Attending his last UN General Assembly as president of Iran, Ahmadinejad said the US and “regional players” could help the process in Syria, adding that “it would be nice if Saudi Arabia would be present” in the new contact group.

In an earlier interview with The Washington Post’s David Ignatius, Ahmadinejad said he would “pursue few avenues during this very trip” to New York.

Asked whether there were tensions between Iran and Turkey over Syria, Ahmadinejad described Turkey as a “partner” which shares Iran’s “ideas and ideals” and that relations were “very good” and would not be affected by "peripheral events."

Andrew Parasiliti is CEO and editor-at-large of Al-Monitor.