UAE hosts Gulf leaders including Qatar's along with Egypt, Jordan

Egypt and Jordan are increasingly looking to the United Arab Emirates and other Gulf states for development and economic support. 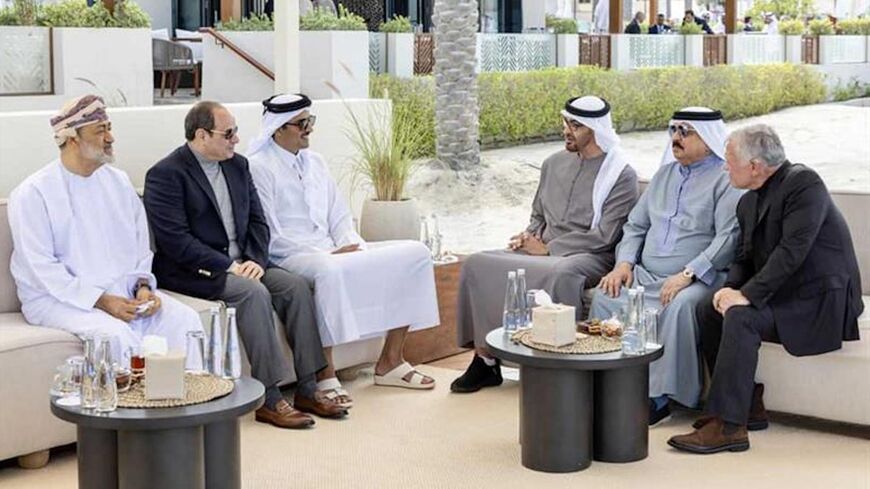 The United Arab Emirates hosted regional leaders for a summit in Abu Dhabi on Wednesday that included Qatar's and Egypt's leaders, in a further push for regional integration.

Few details were available on what was discussed at the meeting. Saudi Arabia and Kuwait notably did not attend.

Why it matters: Qatar’s participation in the meeting is further indication that its relations have normalized with its Gulf neighbors following the end of the Gulf diplomatic crisis in 2021. MBZ visited Qatar in December for the first time since the crisis began in 2017.

The meeting also demonstrates Egypt's and Jordan's continued pivot toward the Gulf. Jordan signed a water and solar energy cooperation deal with the UAE and Israel last November. Gulf firms have also been investing more in Egypt over the past year.

Know more: US Vice President Kamala Harris spoke to MBZ Tuesday night for the anniversary of the deadly missile strike on the UAE by Houthi rebels in Yemen. They also discussed cooperation on the climate, according to a White House statement.

US Secretary of State Antony Blinken also discussed US commitments to the UAE’s security with MBZ and Emirati Foreign Minister Abdullah bin Zayed Al Nahyan Tuesday night, according to a statement from the State Department.

The UAE is hosting other notable meetings this month. Ethiopian Prime Minister Abiy Ahmed also met with MBZ Wednesday. The Emirati renewable energy firm Masdar signed a deal to build a solar plant in Ethiopia during the visit, Reuters reported.

Next week, the India-UAE Partnership Summit will take place in Dubai, according to Gulf News.