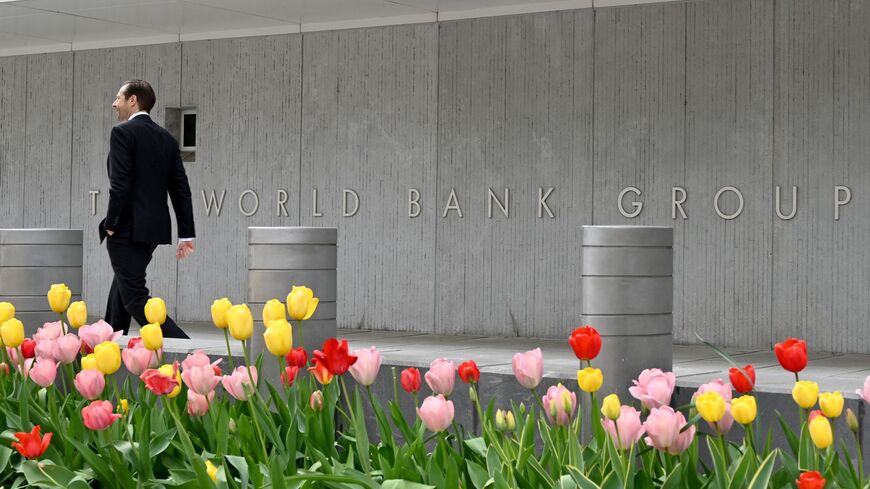 A man walks past the World Bank building in Washington on April 21, 2022. - EVA HAMBACH/AFP via Getty Images

The following is a break of Middle Eastern states and their debt at the end of 2022, according to the World Bank report. External debt stocks refer to the portion of a country’s debt that was borrowed from foreign lenders:

Egypt has spent much of its borrowed money on infrastructure. Some analysts believe Egypt has strong potential to pay back its debt, Al-Monitor reported last year.

The Iranian news outlet Financial Tribune reported Sunday that Iran’s foreign debt is going down again, citing central bank data. The outlet noted that US sanctions are a big impediment to foreign investment in Iran, along with “cumbersome laws and economic instability.”

Iraq finally swore in a new government in October. One of the government’s first moves was to sign a $4 billion engineering agreement with Iran.

In addition to loans from abroad, Jordan regularly receives economic aid from its wealthy neighbors in the Gulf to help fund its budget. One positive piece of news on the Jordanian economy is that tourism revenue is on the rise.

Lebanon is in the midst of a devastating economic crisis. Despite debt going down slightly, many entities are reluctant to loan Lebanon money until it implements governance and anti-corruption reforms.

Syria’s economy is in tatters due to the ongoing civil war. Some observers have also said in recent years that US and European sanctions on the country are harming civilians.

In June, the New York-based credit rating agency S&P Global reported that Turkey is vulnerable to a liquidity crunch due to its high debt and economic issues. Extremely high inflation in Turkey in particular is a problem.

The World Bank did not include information from several regional states, including Israel and Gulf states.