The trip is a sign that Saudi Arabia is seeking more cooperation with China, especially in regards to energy and despite the kingdom’s relationship with the United States. 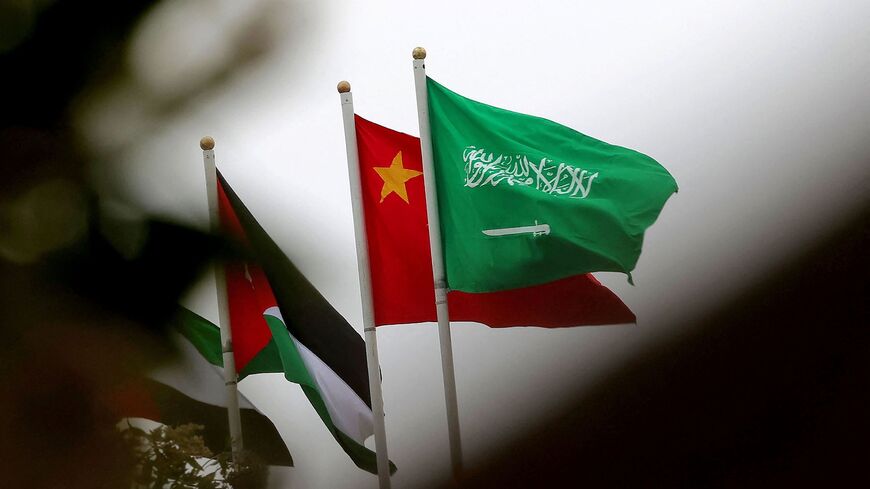 A picture taken on Dec. 7, 2022, in Riyadh shows the Chinese and the Saudi flags adorning a street ahead of the Chinese president's visit to the Saudi capital. Chinese President Xi Jinping will make a three-day visit to Saudi Arabia this week, meeting the king and de facto ruler of the world's biggest oil exporter. - FAYEZ NURELDINE/AFP via Getty Images

Saudi Arabia and China signed a number of agreements on Wednesday at the outset of President Xi Jinping’s visit to the kingdom.

The Chinese leader praised Sino-Saudi ties noting that two countries have signed a strategic partnership in 2016 based on "continued mutual trust." Since then, bilateral relations have contributed to "peace, stability, prosperity and development in the region," he said according to the Saudi news outlet Al-Arabiya.

Farhan said that Saudi-Chinese economic relations are progressing at an "accelerated pace."

The following is a list of agreements and other developments from the first day of Xi’s visit to Saudi Arabia, according to the official Saudi Press Agency:

Why it matters: The agreements thus far are in line with both Saudi Arabia's and China’s strategic objectives. Saudi Arabia is looking to boost its AI sector and also invest in more green technology. The King Abdullah University announced plans for a new AI center in September, and the Saudi Public Investment Fund recently launched an electrical vehicle company, Ceer.

Saudi Arabia is already China’s largest crude oil supplier, and the two countries want to cooperate even more on energy as a whole. In August, Saudi Aramco and China’s Sinopec signed a cooperation deal on oil, hydrogen and carbon capture.

Xi’s trip is also the latest example of Saudi Arabia, a key US partner in the region, pivoting more towards China, as Salim A. Essaid reported for Al-Monitor Wednesday.

China is also Saudi Arabia’s largest trade partner. Saudi exports to China in 2021 consisted largely of petrochemicals and plastics, while Saudi imports from China were largely electrical equipment, machinery and vehicles, according to Trading Economics.

Saudi Arabia may also be eyeing Chinese help to boost its nuclear capabilities during Xi’s visit, according to a report from the Washington Institute for Near East Affairs.