As armed factions in the West Bank struggle under Israeli pursuit, new groups are springing up. 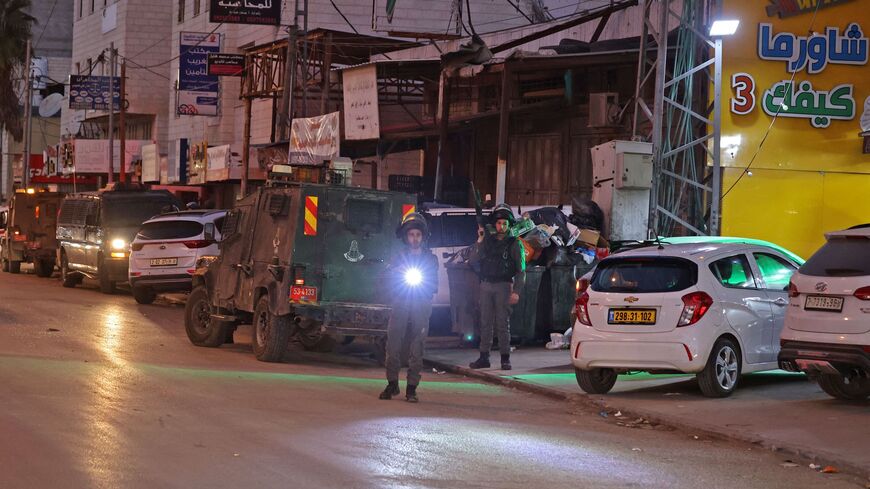 Israeli security forces are pictured during an operation in the occupied West Bank city of Hawara on Dec. 2, 2022. - JAAFAR ASHTIYEH/AFP via Getty Images

Israel’s security establishment is increasingly concerned about the emergence of new armed Palestinian groups in the West Bank committing shooting attacks against Israeli checkpoints and settlements.

As the Israeli military continues its operations against these groups, specifically the Lions’ Den in the city of Nablus, these factions are gaining public support and luring more young Palestinians into their ranks.

Despite the Israeli arrest campaigns and raids in the West Bank as well as the killing of one of the the Lion’s Den’s leaders, Tamer al-Kilani, and the surrender of a number of the group’s members to the Palestinian Authority, the Lion’s Den continues to operate, and more groups have recently emerged, including one called the Black Cave.

In a Nov. 22 report, Amir Bohbot, military correspondent for the Israeli Walla news site, said that though the Lions’ Den group was dealt a severe blow, more armed groups and cells will crop up, according to Bohbot, who added that the Black Cave group brings together fighters spread across Palestine from Jenin and Tulkarem to Nablus.

He accused Hamas leaders of being behind these groups with the aim of destabilizing the West Bank.

Mustafa al-Sawaf, a political analyst close to Hamas, told Al-Monitor that young armed Palestinians from factions in Nablus and Jenin are seeking to send a message to Israel that the resistance cannot be quelled and will continue to respond to the daily Israeli attacks against Palestinians in the West Bank.

He added, “The Israeli accusations that Hamas is backing the armed operations and inciting violence are part of Israel’s ongoing incitement campaign against the movement’s leaders in order to justify the Israeli army’s arrests and killings of Hamas members in the West Bank.”

Palestinian writer Alyan al-Hindi told Al-Monitor, “The escalating Israeli attacks against the residents of the cities of the West Bank have prompted the rebellious youth in the West Bank to shift from defense to attack … to express their overwhelming anger.”

Hindi explained that the new groups have several goals, including “to confuse the Israeli army and show it that the resistance is still going strong."

He explained that Israel is also concerned that these groups are using social media, specifically Telegram, to call on the youth to join their ranks and urge the West Bank residents to confront the Israeli army and protect their members from arrest.

Hindi added, “Indeed, citizens have responded to these calls” and are protecting the militants when called on via mosques' loudspeakers.