Kataib Hezbollah are calling for more attacks on Saudi Arabia amid wrangling over who should protect the country’s borders. 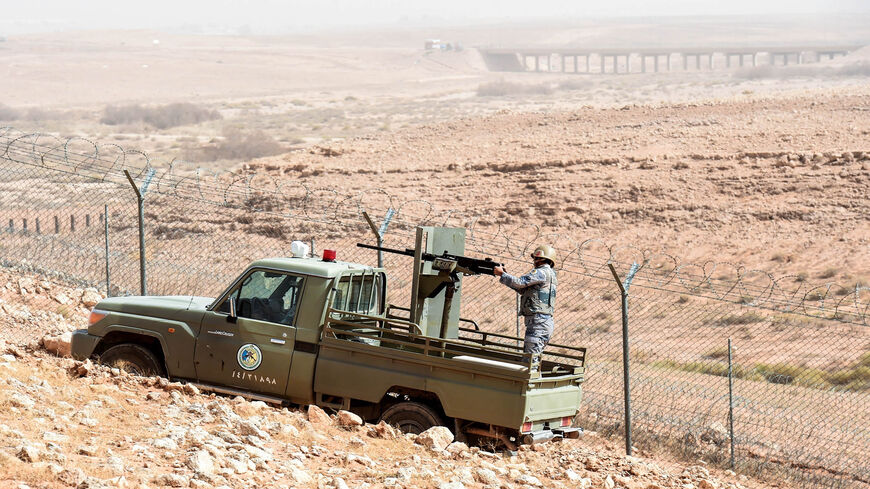 A Saudi soldier mans a turret on a border guards' vehicle as it patrols the fence separating Saudi Arabia and Iraq, in the area around Arar city along the Saudi-Iraq border, March 12, 2017. - Fayez Nureldine/AFP via Getty Images

ERBIL, Iraqi Kurdistan — As Iran warns of a possible cross-border ground operation into Iraqi Kurdistan, an armed faction operating within Iraq has called for Iran-linked armed groups across the region to take the fight to the Saudi capital.

As reported by local media outlets, Kataib Hezbollah issued a statement this week saying, “The optimal solution to deal with the Saudi entity is to establish an alliance from the countries affected by its criminal deeds to transfer the conflicts into the streets of Riyadh.”

Kataib Hezbollah’s call came after Iraq’s new government seemed to imply that they will continue the previous government’s attempts to bring about rapprochement between Saudi Arabia and Iran.

It has also come on the heels of Iran’s accusations that Saudi Arabia is in some way supporting the ongoing mass protests in Iran through affiliated media outlets.

Kataib Hezbollah is an Iran-linked Iraqi armed group that includes a political wing part of the Coordination Framework alliance now in government. It is suspected of involvement in targeting Saudi Arabia via drone attacks in recent years. An Iraqi group that calls itself Alwiya al-Waad al-Haq claimed responsibility for a drone attack against the Saudi capital in early 2021, saying it had been conducted “solely by Iraqi hands.” Many claim this group is linked to Kataib Hezbollah.

According to a 2021 Washington Institute policy analysis, “Iran-backed militias have twice assisted the Islamic Revolutionary Guard Corps (IRGC) in launching small explosive-laden delta-wing drones from Iraq into Saudi Arabia at ranges of 600-700 kilometers [373-435 miles] — first in May 2019 against the East-West oil pipeline, and again that September against the Abqaiq oil processing plant.”

After Iraq’s new government under Mohammed Shia al-Sudani took office in October, an official statement issued in late November read, “Iranian-Saudi dialogue has moved from the security track to the diplomatic track.” However, there is no indications that any new sessions will be held in Baghdad soon. Some reports even stated that Saudi Arabia halted the negotiations with Iran recently.

Under Prime Minister Mustafa al-Kadhimi, Iraq’s Arar border crossing with Saudi Arabia was reopened in 2020 after a 30-year closure. Agreements were also signed between the two countries for greater collaboration in a number of sectors.

Kadhimi was involved in low-key talks in the Iraqi capital meant to mend relations between Saudi Arabia and Iran, longstanding regional rivals who cut diplomatic ties entirely in 2016. These talks were later suspended.

In June, prior to leaving office in October, Kadhimi met with Iranian President Ebrahim Raisi in Tehran a day after visiting Saudi Arabia, stating in a joint press conference, "We have agreed to work together to bring stability and calm to the region.”

One of the main issues Sudani is believed to have discussed during the visit to Iran this week is security along Iraq’s northeastern border with Iran.

In a meeting with Iran's Supreme Leader Ayatollah Ali Khamenei, Sudani “reiterated that the government is committed to the Iraqi Constitution, which prohibits making Iraq a launchpad for aggression against its neighbors,” according to a Nov. 29 statement published on the official website of the prime minister’s office.

Iran has accused Kurdish opposition parties with armed wings that have operated in exile in the Kurdistan Region of Iraq for decades of supporting the protesters in Iran who have taken to the streets in large numbers following the Sept. 16 death of a young Kurdish woman in custody who had allegedly been beaten.

Iran-linked media have also accused Saudi Arabia and Israel of supporting both the protests and the Kurdish opposition parties in exile.

Representatives of Iranian Kurdish opposition parties based in Iraqi Kurdistan told Al-Monitor that they provide “moral support” in the form of engaging in social media advocacy, and so on, but that they are not sending fighters or weapons across the border into Iran. They declined to answer questions of whether they receive any sort of support from any foreign country.

Some allege there may be murkier reasons for the IRGC and those aligned with it to control this part of the border between Iraq and Iran.

In recent weeks, multiple sources have in conversations with Al-Monitor in the Erbil and Sulaimaniyah provinces in Iraqi Kurdistan claimed links between the Kurdistan Workers Party (PKK) and the IRGC, not only in the Sinjar region along the border with Syria — where they are more evident, with IRGC-linked groups collaborating with local forces trained by the PKK — but also near the Iranian border.

Sources within Iranian Kurdish opposition parties targeted by Iranian missile and drone attacks over the past two months have told Al-Monitor on condition of anonymity that they believe that the PKK and the IRGC collaborate there.

The sources from the Iranian Kurdish opposition parties noted that the PKK do not want these Iranian Kurdish parties to retain their bases in the mountains in the Kurdistan Region of Iraq, and claim that the PKK may support the IRGC’s attacks on them. While other Kurdish opposition parties are on good terms with each other, they say, the PKK has long been hostile to any other Kurdish group operating in these mountains.

“Whenever there are problems in Syria, the PKK move their fighters to these mountains [in the eastern part of the Kurdistan Region], but they never get attacked. Iran attacks us, instead, in the same areas,” one source said on condition of anonymity.

The attacks have forced some to temporarily abandon bases in areas that the PKK has long wanted control over.

While IRGC involvement in drug trafficking into Iraq both via the Iranian border into Iraq’s southeastern province of Maysan and through Iraq’s border with Syria near and south of the border city of Qaim has long been alleged, whether and to what extent it is involved moving drugs across this area is unclear.

Calls have been made in Iraq’s Kurdistan Region in recent weeks for air defense systems, after repeated Iranian missile and drone attacks on its territory.

Media linked to the Lebanese Hezbollah, close to Iran, have claimed that this is part of a larger plan to “encircle Iran” in collaboration with Saudi Arabia.