Iran’s top diplomat spoke with the EU foreign policy chief on the revival of the 2015 nuclear deal, but the meeting was strained against the backdrop of deadly unrest at home and hard-liners' push for nuclear weapons. 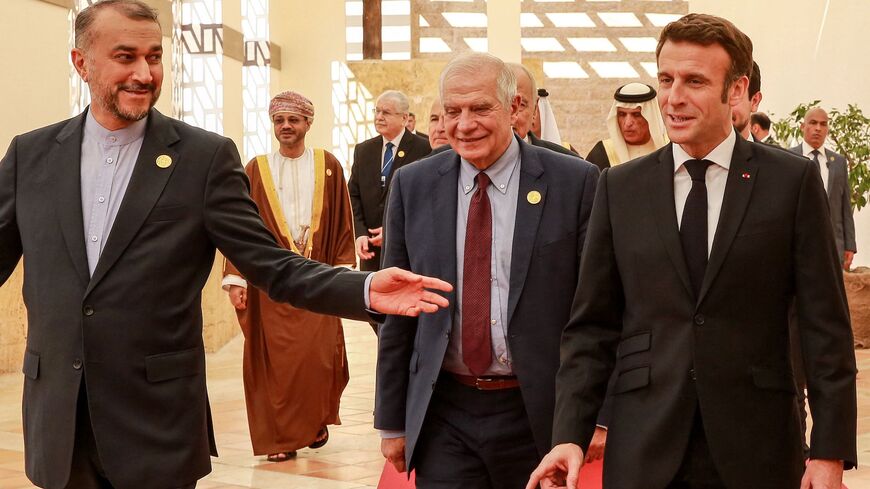 Iranian Foreign Minister Hossein Amir-Abdollahian, High Representative of the European Union for Foreign Affairs and Security Policy Josep Borrell and French President Emmanuel Macron arrive with other dignitaries at the start of the Baghdad Conference for Cooperation and Partnership in Sweimeh, Jordan, on Dec. 20, 2022. - KHALIL MAZRAAWI/AFP via Getty Images

TEHRAN — Iran's Foreign Minister Hossein Amir-Abdollahian sat down with the European Union’s top diplomat Josep Borrell in Jordan Tuesday to discuss the future of stalled talks over the revival of the Iran nuclear deal, the Joint Comprehensive Plan of Action (JCPOA).

The government-affiliated IRNA news agency reported on Tuesday that “the more than two-hour meeting” was held on the sidelines of the second Baghdad Conference for Cooperation and Partnership. Regional and international leaders have convened in the Jordanian coastal town of Sweimeh to discuss Iraq.

IRNA quoted the Iranian minister as saying that Tehran is "ready to conclude" the revival of the JCPOA. The report did not cover Borrell’s stance, who later tweeted that he had urged Iranian authorities to put an end to their military support for Russia’s war on Ukraine as well as the ongoing “repression” of protesters at home. As the two sides appeared to have made no breakthrough, Borrell said he had stressed the need for communication for the nuclear deal's revival at a time of “deteriorating Iran-EU relations."

The pair last met in June, when Borrell visited Tehran and left with high optimism about diplomatic efforts at the time. The talks, however, remained deadlocked, with the United States accusing Tehran of returning to the table every time with new demands that went beyond the original JCPOA. Iran has denied the charge, hitting back at the United States for “lacking seriousness.”

The prospects for the revival of the JCPOA have dimmed since mid-September, when Iran began to be shaken by anti-government unrest following the death of 22-year-old Mahsa Amini in police custody. With the Iranian government showing no signs of accountability for its deadly response, American and European officials have been placed under relentless pressure not to resume talks with Tehran, and have thus announced that their primary focus would be supporting the protesters, a stance that the Islamic Republic views as meddling in its domestic affairs.

As the unrest nears its 100th day, over 500 protesters, among them some 70 minors, have been killed, according to a tally by the Human Rights Activists News Agency. The level of brutality against protesters at home has triggered alarm from dissidents on the threat to global security such a government could pose once it is in possession of nuclear weapons.

Iran's hard-liners, on the other hand, continue to press the nuclear accelerator. “The atomic bomb of deterrence,” read a front-page headline from the hard-line paper Vatan Emrooz on Tuesday. The article covered comments by former Iranian Foreign Minister Kamal Kharrazi, who is currently a senior adviser to Iran’s Supreme Leader Ayatollah Ali Khamenei. On Monday, the veteran diplomat repeated an earlier announcement that Tehran does possess the know-how to produce nuclear bombs, saying, “but we have no intention to do so.” Kharrazi was referencing a 2003 Khamenei fatwa banning the development and use of weapons of mass destruction.

Vatan Emrooz quoted “foreign analysts” as saying that Iran should produce at least one or two bombs “to permanently neutralize US threats against its nuclear achievements." With nuclear deterrence gained, Vatan Emrooz noted, the United States and Israel would never have the “audacity” to strike Iran.

The paper found another message between the lines of Kharrazi’s statements: “It served as a warning to the Americans that if they seek to continue creating uproar against Tehran … they won’t get anywhere, because Tehran has already reached the point of nuclear deterrence where it is capable of producing nuclear weapons.”