Over a thousand tourists have been evacuated from Jordan's historical city of Petra as floods engulfed the area. 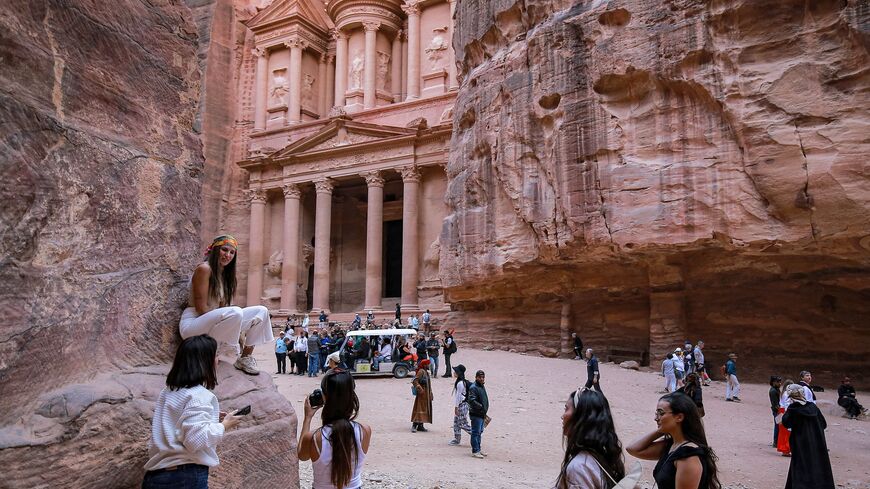 A tourist poses for a photo at the ruins of the ancient Nabatean city of Petra in southern Jordan, Dec. 12, 2022. - KHALIL MAZRAAWI/AFP via Getty Images

Petra is located about 30 kilometers (19 miles) northwest of Ma’an. According to Ammannet, Ma'an governorate recorded 66 millimeters of precipitation as of Tuesday morning. Footage spreading on social media shows water washing into the entrance of Petra’s rock temple and a bus tipped over by torrential rainwater.

Why it matters: Petra, called the “Rose City” for its red stone, has been standing for 2,000 years, was declared a UNESCO World Heritage Site in 1985. It was carved by the Nabateans, an Arab Bedouin tribe, in the second century A.D. directly into a pink-red sandstone cliff and includes burial chambers. In 2007 a world body included it as one of the new seven wonders of the world for its historic lineage and beautiful architecture.

The city was a thriving trading post for the tribe, and the wealth amassed there was always a point of envy for other empires. While the natural landscape of the terrain and its mountains served as a natural wall to fend off attacks, including by the Greek Empire in 312 B.C., the city fell to the Roman Empire and was later taken by the Byzantines who eventually controlled the region.

The city was abandoned until the 1800s, when Swiss explorer Johann Ludwig Burckhardt discovered the ruins.

Know more: The area has always been prone to flooding, and the city's builders had created conduits and dams to effectively control the water supply into the city.

In recent years, Petra has also faced other floods and visitors have been evacuated before. In 2018, 4,000 people were evacuated and 13 people lost their lives. In 1963, 23 people were killed. Jordan’s Department of Antiquities decided in 2014 to build a new dam to keep the water from entering the city as well as an alarm system that would go off when the water reaches a certain level.

There was no immediate information available on structural damages from the current flooding.