Although the Jordanian government implemented a plan in the 1980s to relocate the cave dwellers of Petra to modern villages, they are now facing governmental neglect, with some families threatening to return. 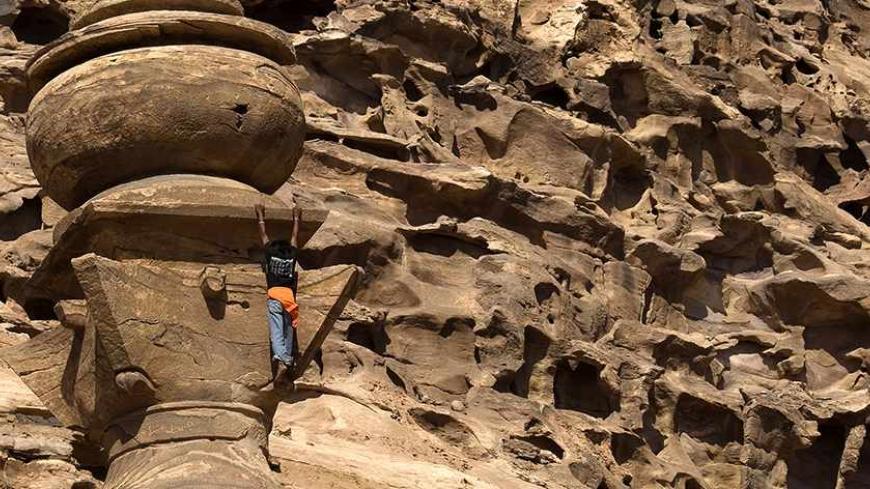 A Bedouin guide climbs to the top of the Monastery in the ancient city of Petra, Jordan, Aug. 31, 2007. - REUTERS/Steve Crisp

PETRA, Jordan — Anyone traveling to Jordan should not miss out on a visit to the ancient city of Petra, located 250 kilometers (155 miles) south of the capital, Amman. This city is the primary tourist attraction in Jordan and won second place in the 2007 international competition of the seven "new" wonders of the world.

Petra is a historic city located in Wadi Musa, whose name derives from the Arabic name for the Prophet Moses. It is the location of the seven springs that — according to tradition — sprang from the site after Moses hit a rock with his cane. The entire city is carved into rose-colored rock, spread over 40 square kilometers (15.4 square miles). Petra was built by the Nabateans in 400 B.C., and they made it the capital of their empire, considered at the time to be one of the greatest civilizations in the world.

Petra is not only distinguished by its Nabatean, Roman and Byzantine ruins but also by the Bedouin population — known as the "Bedul" — who have inhabited the city for hundreds of years. The Bedul are one of the Huwaitat tribes who have historically lived in Petra. They used the land for farming and cattle grazing and lived in the caves to shelter themselves from the cold of winter. The Bedul claim that they are the descendants of the Nabateans and inherited the city from them. They resided in the city's caves until the end of the 20th century. However, some researchers believe that the Bedul are not descendants of the Nabateans, but rather Arabs who came from Egypt 200 to 300 years ago and settled in Petra.

The Bedouins lived in the caves and caverns of Petra — which they called "al-Mughar" — until 1985, when the Jordanian government forced them to evacuate the city's caves and archaeological sites. This was part of a project sponsored by UNESCO and funded by USAID to protect these historic sites from the effects of encroachment. The government established two towns to house them. The first was in Wadi Musa, which the Bedouins moved to in 1978, and the second was Umm Sihon, which the Bedul inhabited in 1985. The authorities moved about 250 families from the caves, providing them free houses in Umm Shihon equipped with necessary services — such as electricity, running water and telephones.

A Bedul man who lives in Umm Sihon and works in a cafeteria in the city of Petra told Al-Monitor that it is not true that the government forced the people to leave the caves of Petra. Rather, it was at the locals' request, because they sought development and access to education, health care and other services — including water, electricity and roads. The same man indicated that about 50 families still live in the caves.

Yet, Ibrahim, a hotel owner in Wadi Musa who hails from another Bedouin tribe and is not a member of the Bedul, told Al-Monitor that the Bedul were forcibly removed by the authorities. He denied the existence of families still living in the caves.

However, Ibrahim's business partner, Mohammed, confirmed that some families returned to live in the caves. He noted that there has been an increase in the number of Bedul residents in Umm Sihon, which is no longer able to accommodate them, as the city cannot expand in any direction. He pointed out that the land of Umm Sihon is owned by tribes, one of which he belongs to, and said that the government gave this property to the Bedul without offering compensation to the residents of Wadi Musa and without granting the Bedul legal ownership of the land.

Ibrahim said that the Bedul have developed a lot. They went from living in caves and relying on camels, sheep and agriculture for food and drink — and transporting water to the caves using donkeys and mules — to living in homes and villas in the town of Umm Sihon. He noted than many of the Bedul have become wealthy as a result of their work in Petra, by selling souvenirs or transporting tourists on horses, camels and donkeys on a daily basis. The Bedul monopolize trade and tourist services in Petra and do not accept others joining them. They have objected to any interference on the part of the Tourism Ministry to limit the locations where they can sell their goods. The Tourism Ministry had previously proposed a plan by which they would congregate in a few markets inside Petra to offer services to tourists, but they refused, insisting on each person practicing his trade individually.

During conversations with the boys and girls working in trade and tourism at Petra, Al-Monitor's correspondent heard many of the residents — especially the young boys, girls and children — speaking foreign languages. Many spoke English in a clear manner that resembled an American or British accent. When Al-Monitor asked a young boy, no older than 15, about this issue, he said that he speaks English, in addition to some Spanish and French. He said that he learned these languages from his interactions with tourists, and through accompanying tour guides.

The Bedul complain about the small size of the village of Umm Sihon, which suffers from overpopulation. The families are threatening to return to live in their old homes in the historic caves of Petra, in protest against the Petra regional administration's failure to respond to their demands to expand the boundaries of their village. They also complain about the small size of their homes, which cannot accommodate their families and their children, who want to marry and raise their own families. They told Al-Monitor that the authorities do not give them land to cultivate and live off, nor do they allow them to set up enterprises or build tourist hotels in the village.

The village of Umm Sihon is home to about 3,000 people who live in small residential units known as "Bedul housing." These units cannot accommodate additional floors, and they cannot expand given the limited land area. The village residents hold the government responsible for the repercussions of overpopulation. They claim that the authorities' vision in the early 1980s did not take into account future population growth and the urgent need for urban expansion when the housing was established. They are demanding the speedy implementation of the orders issued by King Abdullah during his recent visit to Petra to build a community development center in the village at a cost of 600,000 Jordanian dinars [$850,000].

Speaking to Al-Monitor, a local resident who works as a taxi driver criticized the Petra regional authorities' performance, in terms of their failure to provide services to citizens of the region — including the establishment of development projects, creating jobs and repaving and repairing roads.

As for Ibrahim, the hotel owner, he complained about the decline in tourism in Petra because of the war in Syria and the crisis in Egypt. In the past, foreign tourists would travel to Egypt and Syria, and then to Jordan, or vice versa. Today, however, as a result of the Syrian war and the security instability in Egypt and the region, tourists are going to more stable countries in East Asia and Europe. 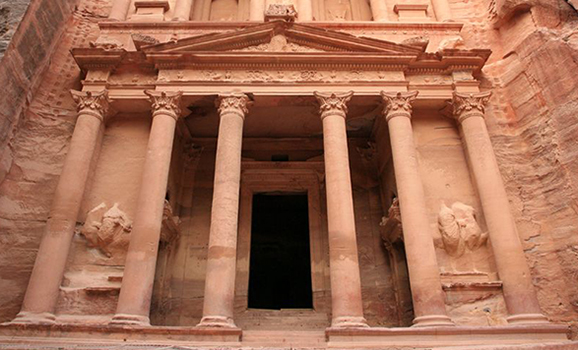 The treasury in the old city of Petra, Jordan. Photo by: Haytham Mouzahem

The local authorities say that they have prepared a plan that includes proposals for residential expansion in six communities located within the Petra region, including the village of Umm Sihon. This plan will be applied over the next seven years, to address all the problems suffered by the village's residents. Although Bedouins are traditionally nomadic peoples who move from one area to another in search of water and food for their cattle, only a few of Jordan's Bedouins remain nomadic, traveling from north to south and vice versa. Most of the Bedouins — including the Bedul — have settled and become sedentary, giving up agriculture, trade and other professions. However, they have kept their Bedouin and tribal customs and traditions.

As one climbs up to one of Petra’s archaeological sites, a large poster becomes visible. A woman has placed it next to her gift shop, and it includes a photo of her on the cover of a book titled Married to a Bedouin. Her name is Marguerite van Geldermalsen — also known as Umm Rami — a New Zealander who came to Petra in 1978 and fell in love with a Bedul man who owned a gift shop in Petra. She married him and lived with him in his cave for seven years. Geldermalsen spoke with Al-Monitor about her experience living with her husband in one of Petra's caves from 1978 to 1985. She learned to cook on wood planks, bake shirak bread and transport water from the valleys to the caves using a donkey.

Geldermalsen said she gave birth to three children — two boys and one girl — and her husband died 12 years ago. She noted that she was happy with her life with him. Speaking about her ability to leave modern civilization and withstand living in a cave, Umm Rami said that life was easier in Petra because there were no expenses. Everything was provided for free — housing, water, electricity and food and drink, which were halal, that is, from the sheep and goats that she raised.

Umm Rami explained that her children have completed their education, and the eldest, Rami, studied electrical engineering in Australia. However, he decided to return to Petra to work in tourism rather than entering the engineering field. Her daughter works at the King's Academy in Jordan, while her youngest son, Marwan, studied media and film and works in the cinema industry in Dubai.