Cairo has recently passed legal reforms to reorganize the river sector, which still remains marginal, in hopes this will catalyze much-needed private investments 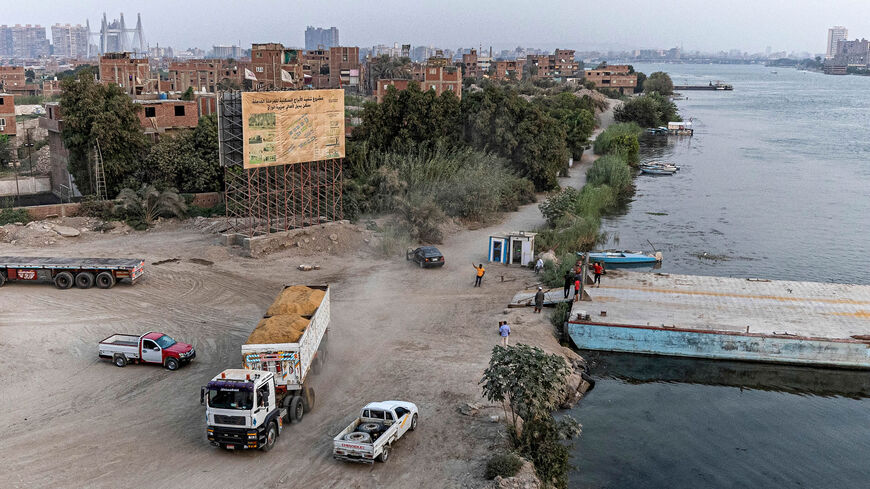 A trailer truck filled with sand waits near a dock at the construction site of new residential towers on the Nile island of Warraq in Giza province, opposite the northern shore of Cairo, the slums of which are planned for development by the government, Egypt, Aug. 31, 2022. - Khaled Desouki/AFP via Getty Images

CAIRO — In a bid to diversify its modes of transport, Egypt has recently moved to restructure the governance of the river transport sector with the aim of accelerating its long-dormant plans to harness the Nile River for the mobility of goods and passengers.

Authorities hope the move will pave the way for private investments in the sector, which remains largely untapped to date despite its competitive strengths.

“Only a negligible amount of commercial goods [in Egypt] — approximately 5% — travel by means other than roads,” Kevin Graham, editorial manager at the Oxford Business Group, told Al-Monitor.

In an attempt to begin to reverse this situation, Egyptian President Abdel Fattah al-Sisi ratified last month the River Transport Act (RTA), a law that seeks to unify regulations relating to river transport and brings the previously divided governance of the sector under the umbrella of the River Transport Authority (RTA).

The RTA will now have greater powers, will be in charge of issuing licenses and permits, and will also be able to establish companies, including with partners, to set up, operate and maintain ports, berths, locks and navigation routes.

“With the recent ratification of the new law, the potential for river transport to be a real contributor to the movement of goods in Egypt actually exists. The law is expected to streamline bureaucracy around river transport projects and to reduce barriers to private sector investment in river transport infrastructure,” Graham noted.

River transport is one of the sectors identified by the government in the state ownership policy document drafted this year as a candidate to accommodate a greater private role.

The country that has so far shown most interest in entering this race has been the United Arab Emirates, and since February the Transport ministries of both nations and representatives of Abu Dhabi Ports have held several meetings to discuss cooperation projects in the field.

These projects, which are all still in the negotiation phase, include a line to transport goods from the city of Minya to Alexandria and Damietta, another line to transport granite from southern Egypt to the north, a passenger transport project in Greater Cairo, and the establishment of fuel and maintenance stations, according to different press releases.

Graham, however, said that Cairo still has a long way to go. “Despite its cost efficiency and environmental benefits, it will take a number of years before river transport is a significant aspect of Egypt’s wider transport and logistics infrastructure,” he noted.

“[And] while news of interest from large international investors gives reason for optimism, thus far most potential investments reportedly under discussion are focused on passenger transport rather than the transport of commercial goods where the greatest economic benefits are,” Graham added.

According to a report by the Federation of Egyptian Industries, the main barriers that hampered the development of the river sector in the past are watercourse and navigational obstacles. These include limited, irregular and not always sufficient water levels, as well as the presence of choke points along the way, such as locks and bridges. A 2014 report by the Organization for Economic Cooperation and Development also noted the need to improve river infrastructure and build local capacity.