As the battle for Turkey’s upcoming presidential and parliamentary elections intensifies, an Al-Monitor poll predicts a tight race between the country’s leading opposition bloc and the ruling alliance. 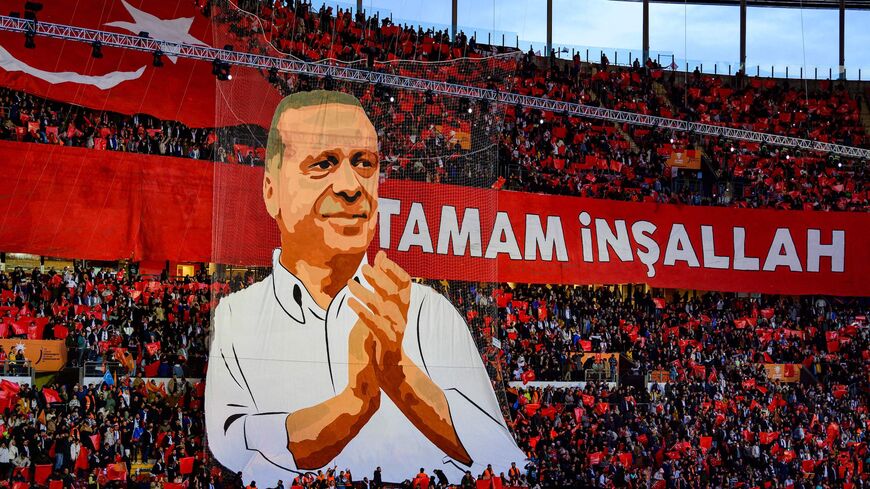 Supporters of Turkey's ruling Justice and Development Party attend a rally at the Galatasaray Nef Stadium in Istanbul on Nov. 27, 2022, six months ahead of Turkey's next presidential elections. - YASIN AKGUL/AFP via Getty Images

Turkey’s opposition alliance holds only a small lead against the President Recep Tayyip Erdogan-led ruling coalition, an Al-Monitor/Premise poll suggests, as the country faces one of the worst economic crises in its history with record high inflation ahead of critical elections in June.

Yet Erdogan’s party, the ruling Justice and Development Party (AKP), remains the most popular individually, with 28% of respondents saying they would vote for the AKP if elections were held tomorrow. The second-largest share went to the CHP at 24%.

The poll of 994 respondents was conducted by Al-Monitor in partnership with data and analytics firm Premise between Aug. 30 and Nov. 30, 2022, across different regions of Turkey. The margin of error is +/-3%.

The poll shows Turkey’s opposition, a six-party bloc, four points ahead of the AKP and its de facto ultranationalist ally. The opposition alliance garners 36% of votes, while support for the ruling alliance stands at 32%. The ruling AKP received 28% of the vote and Nationalist Movement Party got 4%.

The main opposition faction the Republican People’s Party got 24%, while the Nationalist Iyi Party and DEVA Party polled at 9% and 3%, respectively. The six-party opposition bloc also includes the AKP-split Future Party led by former premier Ahmet Davutoglu, the Islamist Felicity Party and the tiny Democrat Party.

The Al-Monitor/Premise poll put support for Turkey’s pro-Kurdish People's Democratic Party (HDP) at 4%. The Kurdish vote was determinative in the 2019 local elections, and many believe could be vital this time as well.

Erdogan, who emerged triumphant from every electoral challenge he faced over the past two decades, is seeking to extend his executive presidency into a second consecutive term. His critics argue that his long grip on power as prime minister (2003-2014) and president since 2014 has shaken the country’s system of checks and balances, eroding institutional independency and pushing the country into one-man rule.

Under political pressure from Erdogan — who holds the unconventional view that high interest rates cause high inflation — Turkey’s Central Bank slashed the country’s interest rates to single digits through a series of unorthodox rate cuts since September. The move prompted inflation rates to skyrocket above 80%, deepening the country’s economic woes and exacerbating the impact of the pandemic and the Russian invasion of Ukraine.

Official data showed Monday that annual consumer inflation eased to 84.4% in November from a 24-year high of 85.5% the previous month, a first slow in 18 months. Yet the slowdown stemmed largely from the statistical effect of the high base the same month last year.

According to the poll, breakneck inflation and skyrocketing prices stand out as the major issue complicating Erdogan’s reelection bid with 67% of respondents believing the economy is the most important challenge that Turkey is facing. The economy is followed by the refugee issue, then justice and unemployment with 10%, 9% and 7%, respectively. Turkey hosts more than 4 million refugees including some 3.5 million Syrians who fled the war.

Turkey's strained economy is further fueling the anti-refugee sentiment in the country as ultranationalist politicians hurl insults and incite against the population.

But despite the economy hurting Erdogan's popularity, the political opposition bloc has yet to fully capitalize on economic grievances. The Al-Monitor/Premise poll shows that only 21% of the respondents are "very satisfied" with the opposition’s performance while 11% are "somewhat satisfied."

Still, more than 55% of respondents said the country is heading in the wrong direction, and Erdogan’s approval rating stood at 38%.

The poll also reflects a high degree of excitement about the upcoming elections. More than 80% of respondents said they plan to vote, with undecideds standing at 8%.

Turkey’s political opposition and government critics have been arguing that the upcoming elections will be the last chance to reverse what they describe as the country’s swift democratic backslide that has been accelerated under Erdogan's executive presidency.

Premise surveyed a stratified sample of adults, aged 18+ in Turkey. A total of 994 responses were collected nationwide with a margin of error of +/-3. Post-stratification weights were applied to align the demographics of the actual sample with the target population based on region, age and gender. Respondents completed the survey in Turkish on the Premise application.