Local factions that include former members of the Free Syrian Army are fighting alleged Islamic State members in southern Syria's Daraa with the support of the Syrian government. 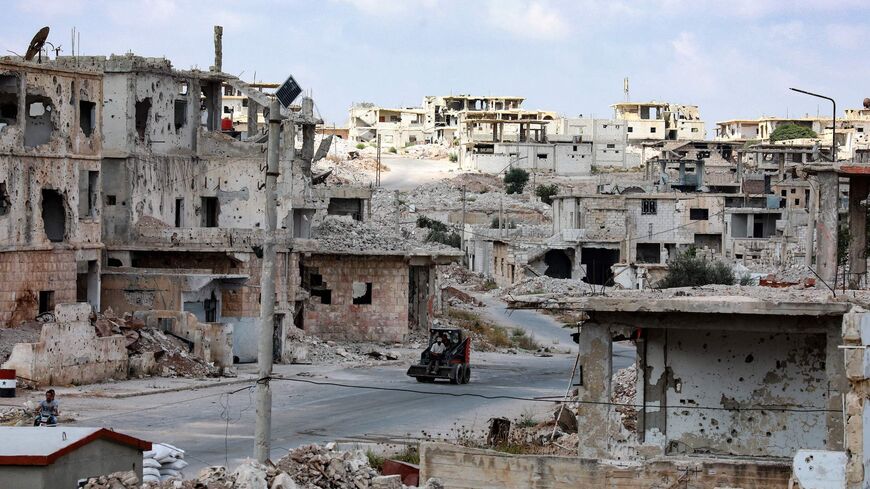 A picture taken during a tour organized by the Syrian Ministry of Information shows a bulldozer in the midst of destruction in the district of Daraa al-Balad of Syria's southern city of Daraa, on Sept. 12, 2021. - LOUAI BESHARA/AFP via Getty Images

AL-BAB, Syria — Battles resumed Nov. 4 between local factions supported by the Syrian government and Islamic State cells in the city of Daraa in southern Syria with the end of the truce that began Nov. 2 to allow civilians to evacuate the affected areas.

Armed clashes have broken out in several neighborhoods of Daraa since Oct. 31 between local groups of former fighters from the Free Syrian Army supported by the Eighth Brigade, which is backed by the government and Russia, and armed groups accused of belonging to IS. The fighting has caused casualties on both sides as well as deaths and injuries among civilians and journalists.

Daraa journalist Omran al-Hourani told Al-Monitor, “After a two-day truce, the battles resumed in Daraa. Most of the residents of Tariq al-Sad and surrounding neighborhoods were displaced, schools were closed and roads were completely cut off due to the clashes that killed several civilians. The humanitarian situation is very bad and people fear the battles will continue and spill over to other neighborhoods.”

Hourani added, “The groups accused of belonging to IS are holed up inside the neighborhoods of Daraa and led by Mohammed al-Masalma. Most of the fighters of these groups are former FSA members who refused to reconcile with the Syrian government. Other local groups led by Khaled Abazid are supported by the Eighth Brigade, backed by the regime and Russia, and also include former FSA fighters.”

He continued, “The attacks increased significantly after the truce ended. The Eighth Brigade intensified its operations against the IS affiliates and managed to kill many and drive them out of the neighborhood to take over their positions.”

Hourani pointed out, “Daraa dignitaries took advantage of the truce to try to stop military operations inside residential neighborhoods, but they failed as the Eighth Brigade carried on with its operations to eliminate every IS cell.”

The local news organization Daraa24 reported Nov. 4 on a meeting held between dignitaries and faction leaders in the Omari Mosque in Daraa. But the effort to reach a solution and end the clashes ended without an agreement.

An Eighth Brigade commander told Al-Monitor on condition of anonymity, “The military operations we are carrying out in Daraa alongside local groups are part of the security campaign to cleanse the city of IS cells that are behind most terrorist bombings and assassinations.”

Another commander in the armed groups accused of being affiliated with IS told Al-Monitor on condition of anonymity, “We have nothing to do with IS, and the decision to attack us came under the orders of the Syrian regime, which wants to eliminate any opposition faction that refuses to reconcile with it.”