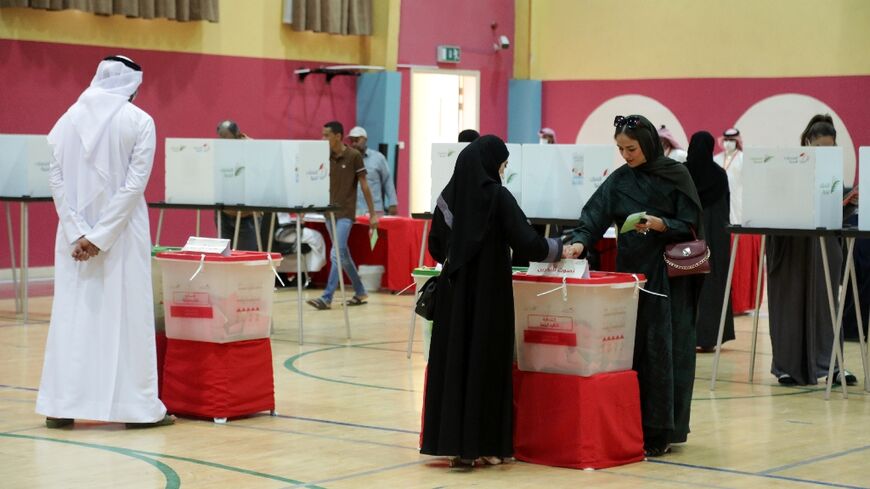 A Bahraini woman casts her ballot at a polling station in the city of Jidhafs, about 3km west of the capital Manama, during parliamentary elections on Saturday - -
Agence France-Presse
November 13, 2022 — Dubai (AFP)

Six candidates including one woman won seats in a first phase of Bahrain's parliamentary election, while others will compete for the remaining 34 seats in the main event next week, authorities announced Sunday.

Bahraini voters cast their ballots in polling stations across the small Gulf kingdom on Saturday, but in the absence of two major opposition groups that were dissolved years ago.

This was "the highest participation rate since 2002," he said, and "no violations (..) were recorded."

More than 330 candidates, including a record 73 women, are competing to join the 40-seat council of representatives -- the lower house of parliament that advises King Hamad, who has ruled since his father died in March 1999.

On Sunday, the results showed that six candidates, five men and one woman, won seats, while the remaining seats will be contested in a run-off next Saturday.

The two main opposition groups, the Shiite Al-Wefaq and the secular Waad, were prevented from presenting candidates. These parties were dissolved in 2016 and 2017 respectively.

This is the third election since demonstrations in 2011 driven by demands for a constitutional monarchy and other political reforms.

Amnesty International said ahead of the poll that the elections were taking place in an "environment of political repression".

A government spokesperson pushed back against that criticism on Saturday.

"Requirements include not having a criminal record or not belonging to a society dissolved due to their court-proven involvement in acts of violence in contravention of legitimate political activity", he said.

Bahrain, the host of the US Fifth Fleet, often accuses its neighbour Iran of training armed groups in order to cause unrest, a charge Tehran denies.

The number of registered voters in the Gulf kingdom is about 350,000 people out of a population of about 1.4 million people.