Incoming Prime Minister Benjamin Netanyahu made a dangerous deal with far-right and religious radical partners who are sure to undercut Israeli's democratic institutions. 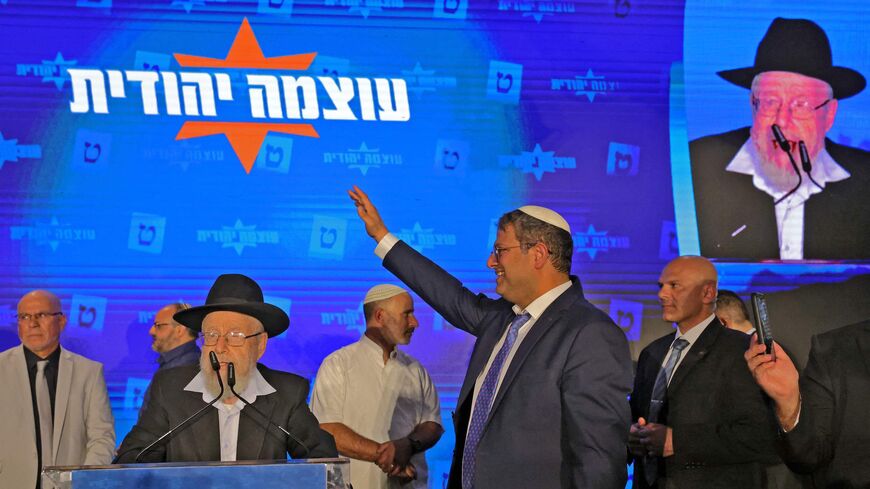 The results of this week’s elections pose the direst threat to Israeli democracy since the state was founded 74 years ago. Israel has always been under existential threat from the enemies around it. It fought for independence, endured numerous wars and waged endless military operations over the years. Overcoming all odds, Israel transformed itself from an underdog into a regional military, technological and scientific superpower, from a destitute barren land into a prosperous state. For years, it dismissed warnings that the real danger to its future lay within its fractured social, religious and political structure, rejecting them as leftist propaganda and prophecies of doom.

If they implement their plans and realize their ideology, the ultranationalist and religious partners in the emerging coalition government of Prime Minister Benjamin Netanyahu could eventually turn Israel into a quasi-authoritarian state similar to Hungary under Prime Minister Viktor Orban, Turkey under Recep Tayyip Erdogan and the Philippines under Rodrigo Duterte and Bongbong Marcos.

While Israeli journalists and other critics are unlikely to be thrown in jail, legal and political maneuvers depleting the Supreme Court of its authority and independence are very realistic in the absence of a constitution guaranteeing a separation of powers. Endemic corruption, human rights violations, curbs on minority rights, erosion of the LGBTQ community’s hard-won achievements and a takeover of the state coffers by the ultra-Orthodox minority are all tangible threats. As of this week, they are no longer gloomy scenarios but projects in the making.

Netanyahu was a keen guardian of Israel’s legal system during several of his years in politics, his views on democracy shaped by a liberal upbringing and formative years spent in the United States. But Netanyahu owes this week's resounding comeback after 18 months in political exile to ultranationalist and ultra-Orthodox forces. The Religious Zionism and Jewish Power parties, along with the ultra-Orthodox parties Shas and United Torah Judaism, gave him the commanding 64-seat Knesset majority he needed to resume power, and they will now hold him hostage.

Netanyahu is to present his government within two to three weeks. It is expected to adopt radical policies on law and order and security issues, likely nailing shut the coffin of the defunct peace process and relations with the Palestinians and brewing a perfect storm.

He does not enjoy a popular majority. The number of Israelis who voted for him and his Likud party is only slightly larger than the group that did not, or possibly equal. But with his brilliant political skills, Netanyahu built a solid, cohesive and resilient bloc of support, while the parties at the other end of the spectrum, the leftist Meretz and anti-Zionist Arab Balad, failed to cross the electoral threshold. The hundreds of thousands of Israelis who voted for them essentially threw their vote into the waste bin of history and bolstered Netanyahu’s lead.

Unlike his firm hold on the previous governments he led as Israel’s longest-serving prime minister, his new government will control him. He has a relatively comfortable Knesset majority, but little room to maneuver. He will be unable to curb the ideological, political, economic, religious and social appetites of his radical partners on whom his future and his liberty depend. Without them, he will be unable to carry out the judicial and legal reforms needed to stop or bury his ongoing corruption trial. He will thus do whatever it takes to maintain their support.

Here is a partial list of pivotal developments to watch for this coming year:

Netanyahu’s Likud and his allies have vowed to push through legislation enabling the Knesset to override Supreme Court rulings. If such a momentous legal amendment requires only a simple Knesset majority of 61 votes, its passage is guaranteed, as are Netanyahu’s prospects of controlling the highest court in the land.

Will the Knesset, under pressure from Religious Zionism and ultra-Orthodox lawmakers, impose restrictions on LGBTQ rights? Knesset member Avi Maoz of the tiny homophobic Noam party, now a member of Netanyahu’s coalition, said yesterday, "We will legally examine the cancellation of the Pride parade. We will start with Jerusalem. After that, we will see about Tel Aviv." Will the Knesset adopt his wish list, which also includes preventing blood donations by members of the gay community?

Despite its sizable conservative Jewish and Muslim population groups, Israel is by and large free, open and liberal. Will the ultra-Orthodox deepen their control of the public space by banning public transportation on the Sabbath in cities that circumvent this national ban and anchoring in law the special rights enjoyed by their community to avoid compulsory military service? Will Religious Zionism leader Bezalel Smotrich act on his blanket objections to abortions?

The Israel that Netanyahu will inherit is in good shape. The budget deficit has all but been wiped out and unemployment is low. Inflation is far lower than in other Western countries. The Abraham Accords with the United Arab Emirates, Bahrain and Morocco, engineered by Netanyahu, are moving rapidly ahead. The recently signed maritime deal with Lebanon is expected to stabilize Israel’s northern front, and negotiations between world powers and Iran on its nuclear program are moribund. The Mossad intelligence agency has created a powerful deterrent to Iran. The military has dealt a harsh blow to the Islamic Jihad in Gaza and is conducting a successful hunt for the Palestinian perpetrators of recent attacks on Israelis.

Soon, Netanyahu will have no one to blame but himself and his government for terrorist attacks and other troubles, such as the expected economic woes. Israel’s prosperity relies heavily on high-tech developments and exports. With the global tech market facing a crisis, the multibillion-dollar deals that have filled Israel’s tax coffers over the past decade are also bound to decline.

There will be heavy pressure on the state budget if Netanyahu and his allies implement their plans, eroding the relatively high standard of living many Israelis enjoy. Israel’s international diplomatic standing is also facing an uncertain future in light of Netanyahu’s incoming hard-line government.

With its comfortable Knesset majority, Netanyahu’s government may seem immune to disruptions, but that image is misleading. The star of the elections, Jewish Power chair -, has made radical pledges on which he will have to deliver.

Ben-Gvir is a leading advocate of Jewish prayer on Jerusalem’s Temple Mount, the site of Islam’s holiest site, Al-Aqsa Mosque. Netanyahu prided himself over the years on blocking such dangerous ambitions. Will Netanyahu now have the power to stand in their way? Following the elections, Knesset member Mansour Abbas, chair of the Islamist Arab Ra’am party, warned in a Channel 12 News interview that if Jews are permitted to pray at the site, war will ensue. Abbas, who made the unprecedented decision to join the government last year, is the most moderate Arab leader in Israeli history. His warnings are far more convincing than are the platitudes of those who dismiss them.

Ben-Gvir rose from the margins of Israel’s political arena to become key to the new government’s survival. If he's unable to make good on his pledges to rein in terrorism and crack down on rampant crime and lawlessness among Israel’s 21% Arab minority in the Galilee and Negev regions, he will probably ramp up his demands to a level that Netanyahu will be unable to accept.

Outgoing Prime Minister Yair Lapid believes this outcome can be expected within a year to 18 months. He is optimistic. It could take two to three years. The only question is whether the Netanyahu government will collapse before Israeli democracy does.