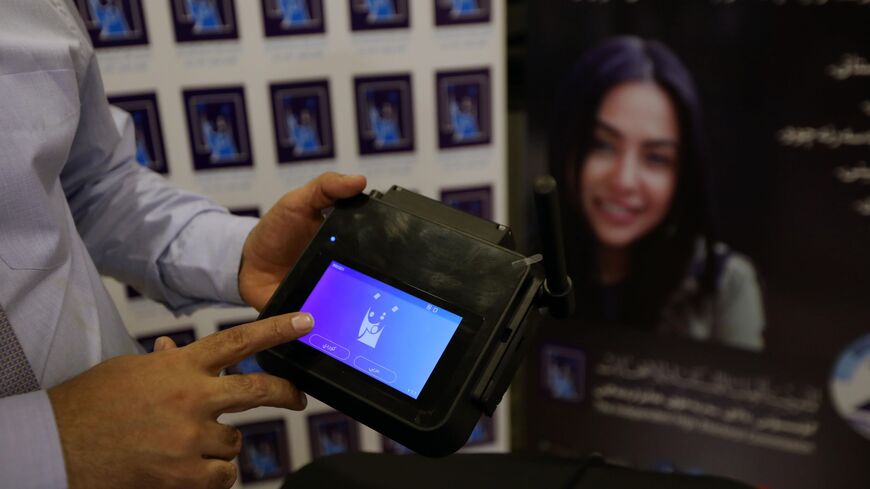 A member of Iraq's Electoral Commission demonstrates a digital machine that scans ballots of Iraqi voters in order to deliver results of Iraq's national election within hours of polls closing, in Erbil, the capital of the northern Iraqi Kurdish autonomous region, April 25, 2018. - SAFIN HAMED/AFP via Getty Images

The Kurdistan Regional Government (KRG) in Iraq launched a “digital transformation” strategy in October to digitize a variety of government functions. The deputy minister of the KRG Department of Information Technology said that digitalization will help bring investment to the autonomous region.

“The more you go digital, the more transparency and efficiency will be visible to possible investors,” Hiwa Afandi told Al-Monitor.

The KRG has already made some progress with digitalization, but some investors say more needs to be done — including at the federal level — in order to attract investment to the Kurdistan Region and Iraq at large.

The KRG Strategy for Digital Transformation is an ambitious plan to make the government one of the most digital in the Middle East by 2025. This means they want government services to be offered digitally by this time. Taxation and business registration are among the services the KRG plans to make digital. The KRG also wants to "empower innovative tech startups," according to the official document.

The British companies Adam Smith International and Skotkonung Ltd. support the strategy. The Chinese tech giant Huawei also helped organize one of the official events for the project in March.

The KRG has made some progress already, opening a data center and digitizing the process for renewing driving licenses, for example.

Part of the effort is to have open data available about companies that are registered in the Kurdistan Region. Such information is not currently available online, according to Afandi.

“All the data becoming available will make investors feel secure,” he said.

Amer Salih is the CEO and founder of iQ Cars, which is an online marketplace for automobiles in Iraq. He described the KRG’s digitalization strategy as “positive.”

“Their work will speed up the development of startups,” he told Al-Monitor.

However, an Iraqi federal law that requires limited liability companies established in the country to have 51% or more Iraqi ownership is a big impediment to foreign investment, according to Salih.

Salih also pointed out that multi-year tax exemptions for companies in Iraqi federal territory and the Kurdistan Region are not available to startups. Other countries in the Middle East have done more to help startups, according to him.

"It's frustrating to see how Jordan, Egypt, the UAE and Saudi Arabia all have well thought-out visions to support the startup community," he said, adding that startups should be exempted from taxes "as a bare minimum."

Salih is not alone in his thinking. Rawaz Rauf is a partner at Euphrates Ventures, which is an investment firm focused on Iraq. He praised the KRG’s digital transformation plan for its “important guiding principles” and focus on digitizing services, but he said the 51% ownership law hinders investment from global companies.

“That must be removed,” Rauf told Al-Monitor. “Most companies globally serve multiple markets in several countries.”

Rauf added that the KRG digitalization strategy must be accompanied by the development of digital payment systems, which are relatively scant throughout the Kurdistan Region and other parts of Iraq.

“For a digitalization strategy, we need stable, digital payment solutions,” he said. “The KRG should allow civil servants to demand their salary in any licensed bank and stop the cash distribution of salaries.”

Digitizing payments will also help spur innovation in the Kurdistan Region, including the development of cell phone applications for payments, according to Rauf.

“Cases such as electricity and traffic fine payments should be digitized so that citizens of Kurdistan can make these payments on any app they choose.”

The Kurdistan Region and Iraq spent years fighting the Islamic State, but the country is now enjoying a relatively strong period of security. Rauf is bullish about the future for this reason, plus the fact that the country’s population is young and tech-savvy.

“We feel that those major security issues are not there,” he said. “There’s huge smartphone penetration and data availability. It’s a very young population.”

“We think it’s ripe for a transformation.”