The Iranian soccer team declined to sing the anthem at their first match, but were then faced with potential legal repercussions. 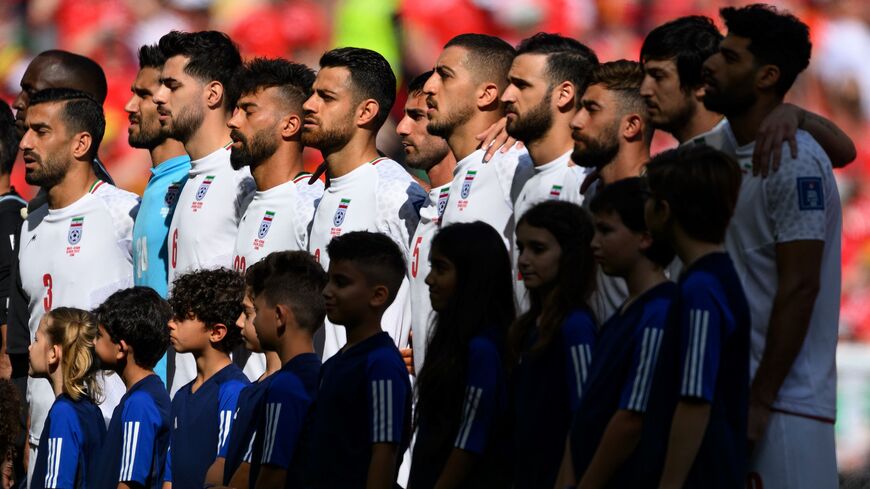 The players of Iran line up for the national anthem prior to their FIFA World Cup match with Wales and IR Iran at Ahmad Bin Ali Stadium on Nov. 25, 2022 in Doha, Qatar. - Matthias Hangst/Getty Images

The Iranian men’s soccer team scored a win at the World Cup in Doha today in a politically charged atmosphere.

Iran defeated Wales 2-0 after losing badly to England on Monday. They will face the United States next Tuesday for their final match in group play. Iran is seeking to advance to the round of 16 for the first time ever. The top two teams from each group make it to the next round.

Why it matters: The Iranian soccer team has said publicly that they are focused on winning and not the ongoing anti-government protests in the country. However, ahead of the match against England, the players notably did not sing their national anthem.

The team may have faced threats for not singing. Iranian judiciary spokesman Massoud Setayeshi said the same day as the England match that insulting the Islamic Republic’s anthem is a punishable offense, the London-based Iran International reported.

A former member of the Iranian team, Voria Ghafouri, was also arrested yesterday for allegedly insulting the team. Ghafouri is a long-time critic of the Iranian government.

Many Iranian fans at the World Cup have used their attendance to voice support for the protests. Fans booed the Iranian anthem today, while some brought banners supporting the protests.

Know more: Saudi Arabia pulled off one of the biggest upsets in World Cup history this week when they defeated Argentina. The Gulf state declared a national holiday in celebration of the win.

The controversy over the Iranian team is hardly the only contentious issue at the World Cup, which is being held in the Middle East for the first time ever. The international soccer governing body FIFA recently forced European teams to abandon their plans to wear pro-LGBTQ armbands during their matches. Qatar also prohibited the sale of alcohol in stadiums just before the games began.