Explainer: the US-Iran dispute over flags and the World Cup

The US men’s soccer team posted an image of the Iranian flag with the word “Allah” removed from it. 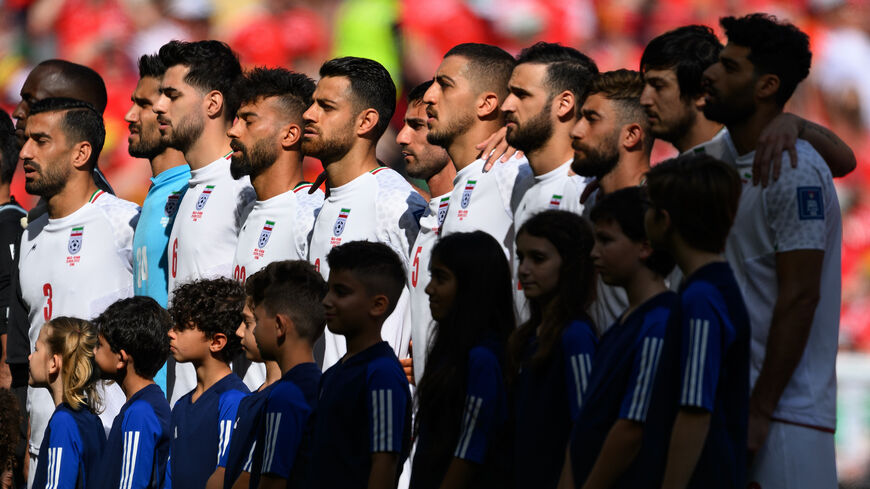 The players of Iran line up for the national anthem prior to the FIFA World Cup Qatar 2022 Group B match between Wales and IR Iran at Ahmad Bin Ali Stadium on Nov. 25, 2022, in Doha, Qatar. - Matthias Hangst/Getty Images

The United States and Iran are in a war of words again, this time over an image of the Iranian flag and their upcoming soccer match at the World Cup in Doha.

What happened: On Sunday, the US men’s national soccer team posted an image showing the standings in the World Cup’s Group B, which includes the United States, Iran, England and Wales. The flag of each country was shown; however, the Iranian flag’s emblem and writing were not visible. The red emblem in the middle of the flag reads “Allah,” which is Arabic for “God.” The white script reads “takbir,” which is an Arabic-language call that Muslims say to praise God.

The official Twitter account of the US national football (soccer) team (@USMNT) has removed the Islamic Republic's "Allah" emblem and the "takbirs" from Iran's three-colored flag in a picture it has posted of their FIFA World Cup group's standings ahead of Iran-US Tuesday match. pic.twitter.com/cQgBepEiPN

The team subsequently deleted the tweet. The US team later posted another tweet that featured an unaltered Iranian flag image.

The United States and Iran will play Tuesday in their final match in group play. Both teams have a chance to advance to the next round with a victory.

In response to the flag diss, Iran’s soccer body lodged a lawsuit with FIFA over the issue, the official Islamic Republic News Agency reported today.

The US men’s soccer team did not immediately respond to Al-Monitor’s request for comment. A US soccer official told CNN they intended to change the flag temporarily to show solidarity with Iranian women. US coach Gregg Berhalter told reporters today that the team was not consulted about the image.

Iran coach Carlos Queiroz deflected from the issue in his remarks to media today, bringing up "kids dying at schools." This was an apparent reference to gun violence in the United States.

Why it matters: The Iranian soccer team has been mired in controversy at the World Cup due to the ongoing protests and violent government crackdown in Iran. The team met with President Ebrahim Raisi before the tournament and has stated they are focused on winning. This has led many Iranians to root against the team. Recent footage on Iranian social media actually showed people in Tehran burning banners of the team.

What individual Iranian players think about the situation back home is complicated. Captain Ehsan Hajsafi told reporters in Doha that the team “sympathizes” with the protesters.

Sardar Azmoun, who plays in the German Bundesliga, publicly praised the protests but then posted an apology. Azmoun was selected for the team despite government pressure against his selection.

Before the match against England, the Iranian players did not sing their national anthem. However, the Iranian squad did sing the anthem before the Wales match after being faced with potential legal repercussions.

Know more: Teams from the Middle East and North Africa have fared well this World Cup. Iran, Saudi Arabia and Morocco are all in contention to advance to the Round of 16. The final matches in the current round begin Tuesday.