Iran, Saudi, other MidEast teams warm up in Qatar as World Cup approaches

Iran is looking to advance to the second round for the first time ever, but the team is mired in controversy over the protests in the country while host Qatar itself is facing criticism at home. 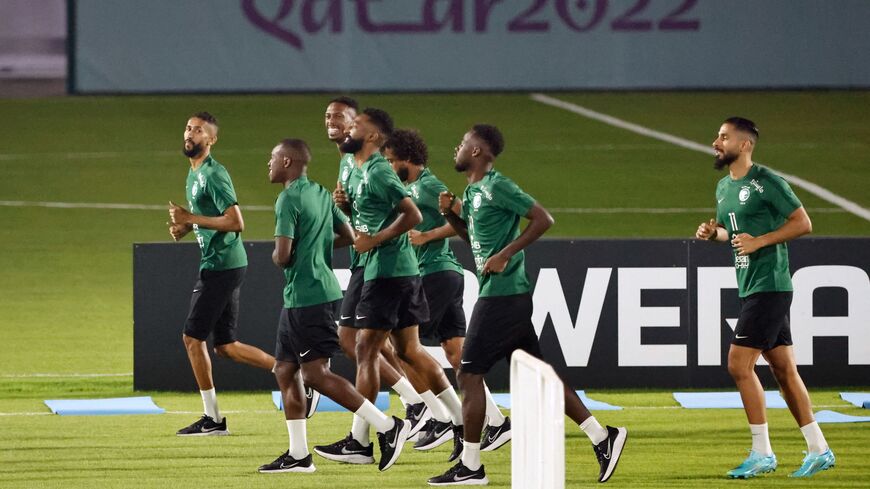 Saudi Arabia's players jog during a training session at the Sealine Beach Resort in Doha on Nov. 17, 2022, ahead of the Qatar 2022 World Cup tournament. - KHALED DESOUKI/AFP via Getty Images

The 2022 World Cup will begin in the Qatari capital of Doha Sunday. It will be the first time the major soccer tournament to be played in the Middle East.

The following is a breakdown of the men’s teams from the Middle East and North Africa that will compete in the World Cup.

Qatar qualified for the World Cup as the host country, and this will be the first time the Gulf state plays in the tournament. They will face off against Ecuador, Senegal and the Netherlands in the group stage. The Netherlands are among the favorites to win the World Cup.

Qatar itself has been mired in controversy in relation to the World Cup. The Gulf state is being criticized by foreign politicians, international media and others over the poor working conditions foreigners face in the country as well as the treatment of LGBTQ people.

Iran qualified for the World Cup for a sixth time, but the team’s performance is wrapped up in the protests ongoing in the country. This week members of the national team met with President Ebrahim Raisi.

Many Iranians on social media criticized the players for meeting with Raisi. For his part, Iranian coach Carlos Queiroz said at a press conference this week that “everybody has the right to express themselves,” but also that the players are focused on the “dream to be in the second round,” according to the London-based Iran International. Iranian player Alireza Jahanbakhsh made similar comments to media Thursday.

Iran has never advanced to the second round at the World Cup. They will face England, who are among the favorites to win, as well as the United States and Wales in the first round.

Iranian football legend Ali Daei said he would not travel to Doha to watch the World Cup, saying he would stay in Iran in solidarity with the protesters.

Interestingly, Sardar Azmoun was selected for the World Cup squad, despite government pressure. Azmoun, who plays in the German Bundesliga, has been outspoken in support of the protests.

Qatar’s neighbor Saudi Arabia will face Argentina, Mexico and Poland in the group stage. This year may be the final World Cup for Argentinian star Lionel Messi, and Argentina is among the favorites to win. Saudi coach Herve Renard has had success at the international level but the Saudi offense is lacking, according to an article from the US sports outlet The Athletic.

Tunisia is also participating in the World Cup for the sixth time. The BBC recently referred to the Tunisian team as “experienced.” The team includes 19-year-old Hannibal Mejbri, who plays for Manchester United in the English Premier League. The league is one of the top soccer leagues in the world.

Tunisia defeated Iran in a warm-up match this week. They will face France, Australia and Denmark in the group stage. France are the defending champions, having one in 2018. Many of the French players themselves are of North African descent.

Morocco’s Achraf Hakimi, who plays professionally for Paris-Saint Germain, appears confident heading into the World Cup, describing the team as “ambitious” after failing to advance in 2018. Hakimi was actually born in Spain, but qualified for the team due to his parents being from Morocco.

Morocco is notably rolling with a Moroccan coach, Walid Regragui, who took over only in August. Hakim Ziyech, who plays for Chelsea in the English Premier League, is one of their strongest players. Morocco will play Belgium, Canada and Croatia in the first round.