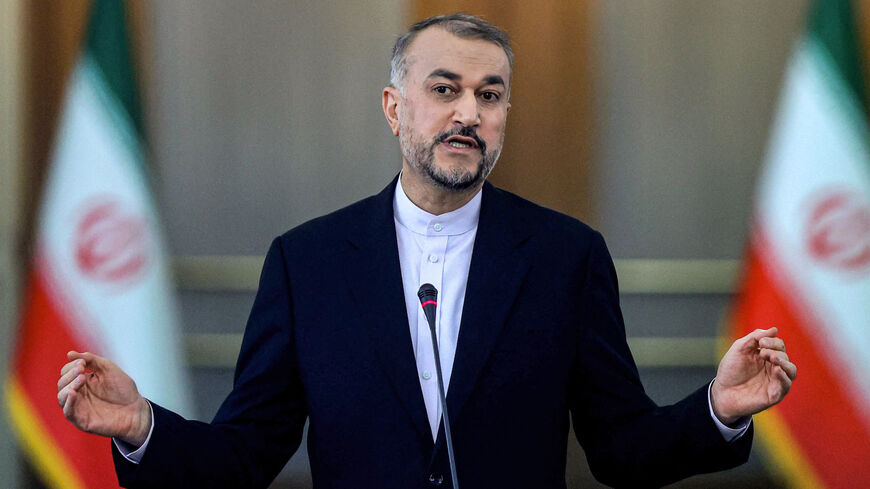 On the protests that have rocked Iran over the last few months, especially the northwest Kurdish regions, Amir-Abdollahian said he held “numerous meetings in the last eight weeks” in Baghdad and Tehran with security officials from the central government of Iraq and the Kurdish Regional Government (KRG). He said they reached several agreements in which Iraq “committed to keeping terrorists away from Iran’s borders.”

Iran launched numerous attacks in the last month into Iraq at the bases of armed Kurdish groups. It also sent reinforcements into the Kurdish areas of Iran where there are heavy protests. Abdollahian said that until the central government in Iraq and the KRG share security on their borders, Iran will continue to “take action to defend national security.”

Abdollahian also claimed that diplomatic organizations in the country have documents proving there is a “conspiracy” to involve Iran in a domestic war, using terrorists, with the goal of disintegrating Iran. He claimed that the conspiracy involved “taking advantage of people’s feelings” to carry out the plot, but it has failed.

The protests began in September after a young woman fell into a coma and died following her detention by the country's morality police enforcing Iran's strict hijab law. The widespread protests include calls to end the Islamic Republic as a whole. Iranian media and authorities have painted protesters as “rioters” and called others in the border regions “separatists.”

An article in hard-line Fars News Agency wrote about the coverage of the protests in the Persian-language media funded by Saudi Arabia, saying that despite their claims of supporting protesters, Saudi-funded media has also been promoting separatists.

Publicly, Iranian authorities have said they will deal harshly with protesters who damage public property. Ali Fadavi, deputy commander of the Islamic Revolutionary Guard Corps, said authorities will separate those who are in the streets into two groups. One group, according to Fadavi, is those who are enemies and are organized by enemy countries. The other group is those who have been influenced but do not have intentions to commit crimes or destroy property.

With few signs of the protests abating, authorities have tried the additional tactic of reaching out to moderate figures. Sobhe Sadegh, a weekly IRGC newspaper, wrote somewhat favorably about former Reformist President Mohammad al-Khatami, who has been on a media blackout since he supported the 2009 protests. Many media outlets have speculated that this coverage is indicative of hard-liners attempting to reach out to moderate figures in order to help quell the protests. Those hopes, however — if they exist at all — are entirely misplaced. The current protests taking place in Iran are being held overwhelmingly by the young who have no memories or even emotional links to Khatami’s presidency or even the Reformist era.