Iran falls to US in World Cup in tense, politically charged match

Iran lost 1-0 in a highly politicized match with clear tensions on the field, dashing their hopes to advance to the Round of 16 for the first time. 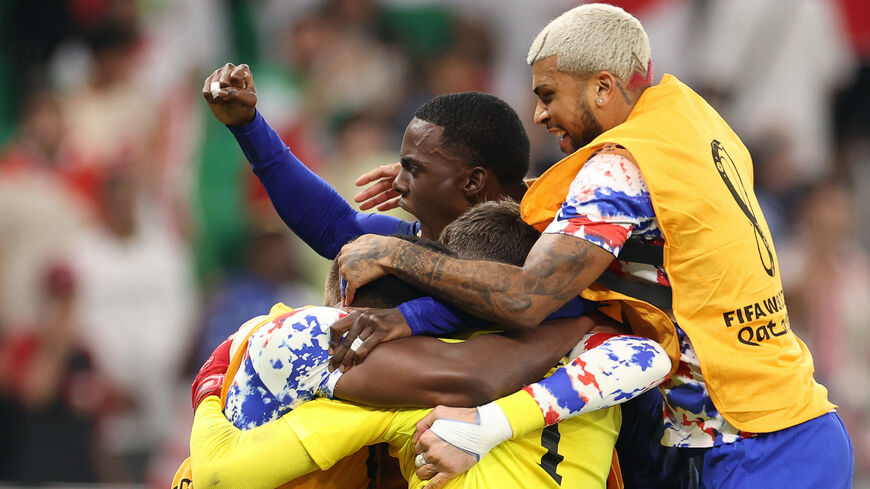 USA's teammates celebrate at the end of the Qatar 2022 World Cup Group B football match between Iran and USA at the Al-Thumama Stadium in Doha on Nov. 29, 2022. - FADEL SENNA/AFP via Getty Images

Iran’s World Cup dreams were crushed Wednesday night when the United States men’s soccer team defeated their Iranian opponents 1-0 in Doha. Iran was seeking to advance to the second round of the tournament for the first time in history.

Why it matters: Tensions between the American and Iranian governments are not new, but the ongoing protests in Iran have clouded Iran’s World Cup play and this ultimately affected the players. Before the game, a reporter from Iran’s state-run Press TV chastised US player Tyler Adams for mispronouncing “Iran.” The reporter also asked Adams, who is Black, how he feels representing a country that has “so much discrimination against Black people.”

Adams responded by saying discrimination is “everywhere” and that the United States has made “progress” in this respect.

The Iranian government regularly criticizes the US regarding racial issues in the country.

Before the game, the US team’s Twitter account posted an altered image of the Iranian flag in solidarity with the protesters in Iran. The team later backtracked and deleted the tweet, but this did not stop Iran’s soccer body from complaining to FIFA about the incident.

Some Iranian players have expressed support for the protesters, but members of the team also met with President Ebrahim Raisi before the World Cup. The meeting, coupled with some players distancing themselves from the situation back home, has led to some Iranians not rooting for their soccer team. Some people in Iran even celebrated the team's defeat.

Videos circulated on Iranian social media showing people cheering in Tehran after the US scored a goal.

These tensions were clear on the field. Other Iran fans in the stadium were rooting for their team, and the game was a physical one. In stoppage time, Iran’s Abolfazl Jalali pulled down American Yunus Musah and received a yellow card. Iran also nearly tied the match at one all with minutes to play.

Despite the tough play, players from both teams embraced each other after the match.

Know more: Qatar’s World Cup is the first to be held in the Middle East. Iran is not the only country in the region whose tensions have been playing out in Doha. Qatar, which does not have relations with Israel, allowed Israelis to travel to Doha for the tournament. Israeli journalists have been publicly shouted at and insulted by fans as well as Qatari officials.

Qatar’s handling of the situation with Iran has also proved controversial. For example, World Cup officials denied stadium entry to some Iranian fans who had flags from the pre-Islamic Republic of Iran.