An unhealthy rivalry between Qatar and the UAE was on display during the AFC Asian Cup semi-finals, with Emirati fans booing the Qatari national anthem and pelting water bottles at the players. 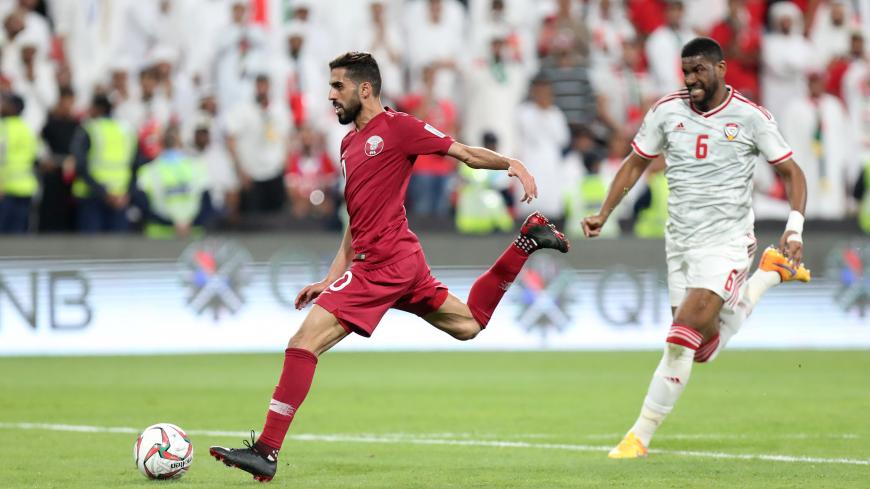 As host of the 2019 AFC Asian Cup, the United Arab Emirates suffered a humiliating 4-0 loss to Qatar in the semi-final, ending the UAE’s tournament run and setting Qatar up to face Japan in the final. This heated game, held in Abu Dhabi's Zayed Sports City Stadium, which many called “Blockade Derby,” may ultimately serve to push Qatar and the UAE even further away from political reconciliation in a day and age in the Gulf in which sports diplomacy is one of the pillars of relations between countries.

During the UAE vs. Qatar game, spectators booed as the Qatari national anthem played and fans pelted the Qatari players with water bottles, shoes and slippers following Qatar’s second, third and fourth goal. Important to note here is the particularly insulting effect of shoe-throwing in Middle Eastern culture. Moroccan-born Ismail Ahmed, an Emirati defender, was removed from the game with a red card for elbowing Qatar's Salem al-Hajri (one of the four on the team originally from Qatar) in the face. Videos of such unsportsmanlike conduct went viral over Twitter, as many reacted emotionally to the game that both sides nervously anticipated.

Inevitably the match was going to be extremely charged given the political context of the Emirati-Qatari rivalry and vitriol between the two Gulf states. This was the first time in which the Emirati and Qatari teams faced off since the Gulf Cooperation Council (GCC) crisis erupted in May and June 2017.

The actions taken by the Emiratis to influence the outcome highlight the extent to which the UAE was determined to secure a victory, even if that entailed violating the AFC’s rules for host countries. In line with the policies of the UAE since June 2017, the Emiratis do not permit Qatari nationals into their country, so Qataris were not able to attend the match and cheer for their team. Yet, as any display of sympathy for Qatar can land one behind bars for 15 years under the UAE’s cybercrime legislation, it is doubtful that too many Qataris would have attended the semi-final in Abu Dhabi even had they been allowed to do so.

Additionally, the Abu Dhabi Sports Council bought the remaining 18,000 tickets and distributed them free of charge to the country’s “loyal” fans. The council did not provide tickets to Omanis and citizens of international countries for fear they would cheer for Qatar.

Asia’s premier international soccer tournament now stands accused of failing to provide Qatar with “fair and equal treatment” given the extent to which the Emiratis politicized the tournament. Speaking to Al Jazeera, the AFC stated it is “conducting a thorough investigation into events at the Asian Cup UAE 2019 semi-final between the United Arab Emirates and Qatar.” Some demand that action be taken against the UAE for the tone which it set, leading to the fans’ disrespectful conduct, and the Emiratis’ failure to fulfill their host duties in terms of protecting all teams. Regardless of how the AFC’s investigation unfolds, Abu Dhabi and Doha’s ties will most likely be shaped by even greater animosity due to the UAE’s sense of humiliation and Qatar’s complaints about the mistreatment of its team’s players during the match.

Throughout Doha, the displays of Qatari nationalism have been far more prevalent since the GCC crisis broke out. Qatar’s routing of the UAE in the semi-final is a source of pride for the blockaded emirate. Having weathered the nearly 20-month-old blockade, defeating the Emiratis in the UAE in a game watched by many people worldwide was an extremely symbolic victory for Qatar in its first time competing in a semi-final. Of course, the emirate will now participate in the final for the first time as Qatar faces off against Japan on Feb. 1.

For Qatar and the UAE, their negative relationship has resulted from myriad issues concerning countries in the GCC and the greater Middle East. Doha’s support for Islamists, Arab Spring revolutions in general, a more liberalized media culture in the Middle East, and Qatar’s relatively warm relationship with Iran are all the main factors that analysts have assessed in understanding Abu Dhabi’s threat perception of Doha. Not lost in the equation, although often overlooked in discussions about the GCC crisis, is the extent to which Qatar and the UAE have been competitors in a host of areas, including global sports.

That Qatar secured the bid to host the FIFA World Cup in 2022 has long been a grievance on the part of the Emiratis, who have seen the gas-rich Gulf country’s rise as a major hub across numerous sectors and assertion of soft-power influence worldwide as a threat to the UAE’s own interests. Although it would be reasonable to argue that a degree of healthy competition between the GCC’s two wealthiest states in sectors such as global sports could have served the Gulf states well, this rivalry between Abu Dhabi and Doha has not been healthy. Yesterday’s game will likely reinforce both capitals’ conviction that reconciliation with the other should not be supported at this stage.