The Iranian government’s escalating violence against protesters in Kurdish cities has led to chains of funerals. 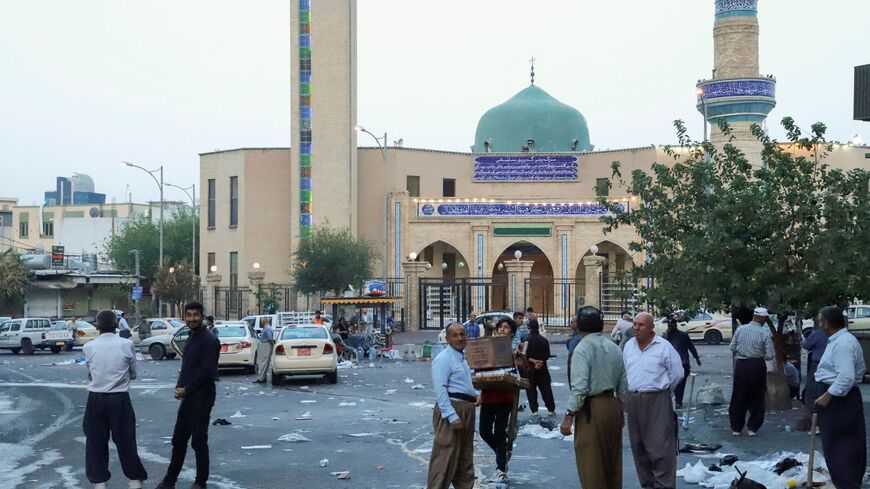 Iranian workers wait for jobs at Workers Square in front of the Great Mosque in central Sulaimaniyah in Iraq's autonomous Kurdistan region, on Oct. 5, 2022. - SHWAN MOHAMMED/AFP via Getty Images

Iran’s Islamic Revolutionary Guard Corps (IRGC) deployed helicopters and rows of military vehicles and machine guns to the Kurdish city of Javanroud as part of its clampdown on anti-government protests that have gripped the country since mid-September.

As reports of deadly shootings came out, the IRGC-affiliated Fars News confirmed that combat bullets had been fired, but on “terrorists” linked to opposition groups based in Iraqi Kurdistan.

The account, however, has been widely dismissed by locals and activist organizations, who have been raising alarms about a “massacre” of civilians. Videos posted on social media on Monday showed IRGC troops opening fire at mourners who had gathered for a funeral of two protesters killed earlier. In clashes that spread across the city, protesters were seen throwing rocks back at the troops and taking cover in narrow alleyways, while desperately trying to get to the body of a shot protester and carry him away amid the gunfire.

The shootings in the past two days have left at least seven protesters dead, among them a 16-year-old boy, according to the Norway-based Hengaw rights organization, which has been documenting the unrest with a focus on Kurdish areas. An eyewitness in the city also confirmed to Al-Monitor that one of the victims, a teacher identified as Erfan Kakaei, was killed while leaving a mosque after prayers.

During the renewed clashes on Tuesday, helicopters were hovering above the city. One video released by a pro-IRGC media outlet showed armed troops firing into an empty street. Other footage reflected chaotic scenes on the same day with protesters fleeing what appeared to be yellow and green smoke from canisters thrown by IRGC forces.

The IRGC heavy deployment and siege on Javanorud followed a similar pattern in Mahabad and Boukan, two other Kurdish cities that witnessed tensions last week as cycles of funerals of protesters led to more killings. The deadly crackdown and distraught mothers of victims pledging revenge prompted locals in Javanroud to come out in solidarity, with death chants against Supreme Leader Ayatollah Ali Khamenei. The city itself is currently pleading for blood donations from other Iranians amid an effective martial law and near-total internet outages.

Hengaw says the government crackdown has killed at least 42 protesters and injured over 1,500 others in Kurdish cities over the past week alone. Many of those injured, families attest, have been forcefully taken away from hospitals by intelligence forces.

The nationwide tally of the 10-week unrest, according to the Human Rights Activists News Agency (HRANA), has hit 434 deaths, among them 60 minors. HRANA also estimates that over 17,000 people have been arrested by government forces.

On Tuesday, Iranian judiciary spokesman Masoud Setayeshi told reporters that some 2,400 people have faced proceedings, with an unspecified number acquitted. Last week, Iranian judges also announced that six people have been sentenced to death over their roles in the “riots.”

The judiciary spokesman also confirmed that among those arrested were 40 foreign nationals who “will be put to trial in accordance with the Islamic Republic’s laws.” He did not elaborate on the nationalities, but linked the ongoing unrest to “a failed plot by Iran’s enemies who waged a multipronged war” on the Islamic Republic.