The clashes saw angry protesters taking on government forces, who had opened fire and blocked ways to the victims’ graves. 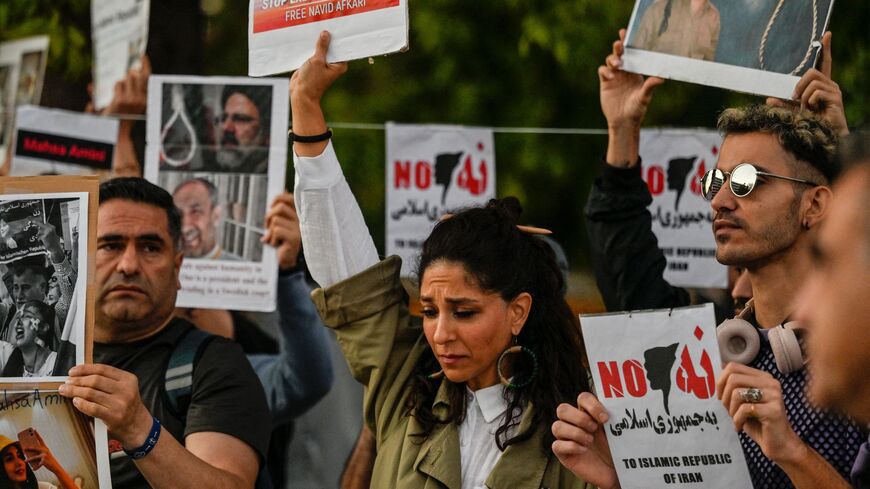 Iranian refugees and Iranians living in Greece hold up placards during a demonstration to commemorate 40 days from the death of Iranian Mahsa Amini while in police custody in Iran, in central Athens on Oct. 29, 2022. - LOUISA GOULIAMAKI/AFP via Getty Images

More than ten Iranian cities saw yet another day of turmoil after protesters attempted to pay tribute to victims of the crackdown on anti-government unrest that has gripped the country since Mahsa Amini’s death in police custody back in September.

The city of Karaj, 40 kilometers west of the capital Tehran, was filled with chaotic scenes, according to reports by both state media and opposition observers.

The tensions broke out after government forces confronted thousands marching to a cemetery to mark 40 days into the death of Hadis Najafi, a 22-year old woman killed during the protests. Videos showed security forces closing off roads leading to the graveyard. And amid repeated firing by security forces, smoke was billowing from police kiosks and vehicles set on fire by protesters.

In other videos, three police officers were seen bleeding inside their vehicle after being “attacked by protesters,” who were said to have disarmed them. The same area also saw government helicopters over the crowds while eyewitnesses filmed parked private cars smashed by “riot police.”

The state-run IRNA news agency confirmed two deaths, without explaining further. Separately, Fars News, affiliated with the Islamic Revolutionary Guard Corps (IRGC), said a member of the plainclothes Basij militia had been stabbed to death, and at least 10 members of police had been wounded.

A cleric was also severely injured in his car, according to a set of viral pictures. Outrage against symbols of the ruling theocracy has been raging in recent weeks, with clerics being heckled and turbans thrown from their heads by running youths, while clergy effigies hanging from pedestrian bridges, as a sign of death revenge, have become a commonplace scene.

At least nine more cities witnessed similar memorial rallies, which were disrupted by armed riot police. In Arak, mourners were commemorating the death of Mehrshad Shahidi. The 19-year-old, according to eyewitness cited by the Prague-based Radio Farda, was attending a protest last month, before he was chased by at least seven security forces, who beat him with batons in the head and dragged his lifeless body on the street.

“Death to the IRGC, the child-killing force,” mourners attending his grave chanted. Others in similar memorial rallies for victim in Amol, Rasht, Bandar Anzali and Ghazvin targeted Supreme Leader Ayatollah Ali Khamenei, who only a day earlier once again linked the unrest to foreign enemies, using past tense in  his speech to imply that the government had succeeded in wrapping up the protests.

And In Fouladshahr, clashes continued well into the night, with footage showing a female protester reportedly shot by security forces. “We will fight on until we have taken back Iran,” the crowds chanted.

As many as 277 protesters, including 40 children, have been killed by Iranian government forces during nearly 50 days of unrest, according to a tally by the Norway-based Iran Human Rights organization.

Activists say Iran’s security and intelligence organizations have been pressuring most of the families of the protest victims with multiple tactics. Some have been brought before cameras to admit to the state narrative that links the deaths of their children to causes unrelated to the protests. Others have been forced to bury the victims quietly.

And those who have refused to give in are facing consequences. The father of 16-year-old Komar Darofatdeh delivered a fiery speech earlier this week at his grave near the Kurdish city of Piranshahr. The Kurdish Hengaw news agency is reporting that he was taken away by intelligence forces on Thursday.

Hengaw separately reported that security organizations summoned Ebrahim Ahmadi in the city of Mahabad, after he posted a video message denying the official line about the death of his 22-year old sister, openly stating that she was shot dead by security forces while watching a protest from her home’s rooftop.