While the case of Mahsa Amini's death in custody is still far from being settled, Iranian officials have been embroiled by one report after another on the killing of teenage protesters. 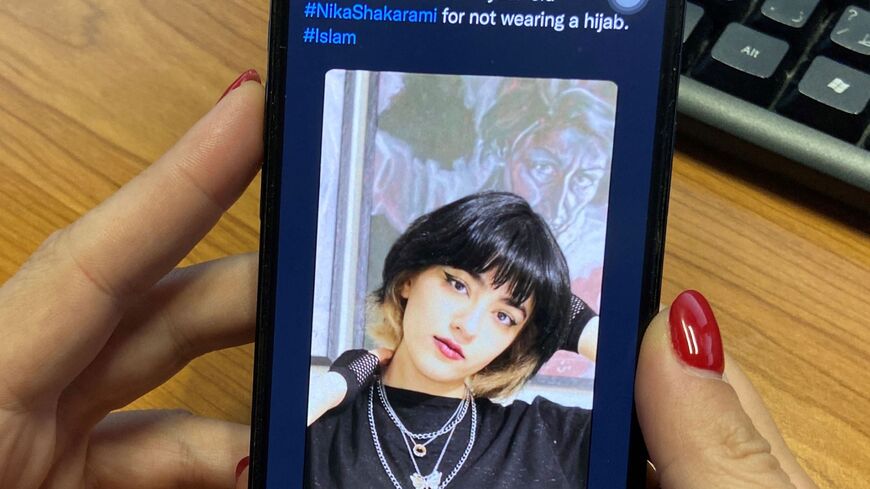 A woman looks at the profile picture of Iranian teenager Nika Shakrami, who was reportedly killed recently during protests in Iran, in the Cypriot capital Nicosia on Oct. 6, 2022. - AFP via Getty Images

Iranians have been appalled by the deaths of three 16-year-olds in the  anti-government protests that have been sweeping the country after Mahsa Amini's death in police custody on Sept. 16.

Nika Shakarami: Her body was buried near her parents' hometown, Khorramabad, on Tuesday. But the burial did little to stop questions surrounding her death. According to her family, she disappeared on Sept. 20 while attending an anti-government protest in Tehran.

The quest by Nika's mother, aunt and uncle lasted for nine days, before they were informed of her death. The family members told foreign media that while they were kept in the dark, Nika had been in custody of the Islamic Revolutionary Guards Corps (IRGC).

Iranian officials, however, say that the teenage girl fell off a five-story building, and it had nothing to do with the protests.

The uncle and the aunt were arrested and then put on state television Wednesday night to deny their own accounts and confirm the official narrative. Yet many Iranians believe the confessions were made under duress. Apart from the seemingly stressed faces, users on social media pointed out gaffes. The video inadvertently showed an interrogator mirrored on a door, and two words dictated to the uncle could be heard and had been left unedited from the final video.

Hours later, Nika's mother, Nasrin Shakarami, shared a video message with Prague-based Radio Farda, entirely rejecting the state narrative. "I don’t have to go a long way to prove the coercive nature of these confessions," she said, adding that they "are nothing new" to Iranians. Iran's state broadcaster has historically faced accusations of airing forced detainee confessions.

She added that Nika's body had no fractured arms or legs, a sign that she never fell off a building. Rather, she said, her daughter had severe beating marks on her face and skull. The victim's mother also referenced a burial certificate that had briefly cited the death cause as "repeated blows by a hard object." The same document was leaked and shared online by BBC Persian on Wednesday.

Nasrin Shakarami also declared that security forces were pressing her to prepare for a TV interview to dismiss her own account.

Nima Shafighdoust: The 16-year-old boy was delivered dead to his family in the northwestern city of Urmia on Wednesday. According to the Kurdish Hengaw Organization for Human Rights, Nima was initially shot by police and had been receiving treatment at home. Hengaw adds, however, he was taken away by intelligence forces and kept in custody, where he died after two days.

According to the Oslo-based Iran Human Rights, at least 154 people have been killed by Iranian police and the hard-line paramilitary Basij forces during the unrest. Thousands are also believed to have been sent behind bars and kept under harsh detention conditions.

Sarina Esmailzadeh: On Wednesday, videos went viral from another 16-year-old from the city of Karaj, who was killed Sept. 21. According to Amnesty international, Sarina "died after being severely beaten in the head by batons."

Iranians shared grief with videos from Sarina's small YouTube channel, when after school exams she spoke of her holiday list of readings, and her movie watchlist.

In yet another video, she was seen telling her audience in simple words about public grievances under the Islamic Republic establishment and "certain restrictions, which are even more severe when it comes to women, such as mandatory hijab."

Threatened by the TikTok generation

Iranian schoolgirls have in recent days joined protests for women's rights and other freedoms, with daring slogans against the ruling establishment on the streets. Despite weekend closures on Thursday, they continued those rallies in many cities, including Tehran, Rasht, Eslamshahr, Arak and Boukan, according to multiple digital outlets. Removing their hijabs, the students chanted "women, life, freedom," a slogan that has been central to the ongoing movement.

Iranian authorities have confirmed the average age of those detained during the unrest stands at 15. Alarmed by the spread of the rallies to schools, the country's police chief, Hossein Ashtari, appeared in a state TV interview on Wednesday and advised parents to keep their children away from protests.