A fresh episode was seen in raging protests across Iran as schoolgirls defiantly twirled headscarves and chanted against Iran's supreme leader, who ordered a crackdown on the protesters. 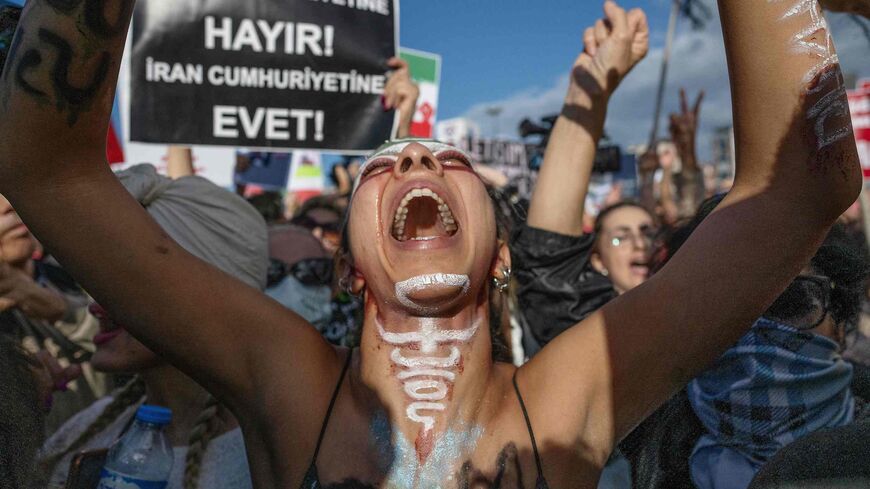 A protestor shouts slogans during a demonstration against the Iranian regime and in support of Iranian women, after young Kurdish Iranian woman Mahsa Amini died after being arrested in Tehran by the Islamic Republic's morality police, in Istanbul on Oct. 2, 2022. - BULENT KILIC/AFP via Getty Images

Demonstrations that started after the death of 22-year-old Mahsa Amini in the custody of Iran's morality police and rapidly grew into nationwide anti-government unrest entered their 19th day, taking a new turn not seen in previous Iranian protests.

One video after another was shared on social media showing teenage high school girls waving their headscarves and chanting "women, life, freedom" on the streets of Tehran and other major cities.

Many also tore, burned and stomped portraits of Supreme Leader Ayatollah Ali Khamenei in classes and schoolyards. In one incident, a male education official approached the chanting girls before being booed, shamed and forced out.

In other daring slogans, the teenage girls shouted "clerics must get lost" as they burned headscarves, marking unprecedented moments in the history of the Islamic Republic. "Shame on you Sepahi," some chanted in Tehran's Naziabad district, using the Persian title for the members of the Islamic Revolutionary Guard Corps (IRGC), and called on them to "leave our country alone."

"This is the year of blood; Khamenei's overthrow is looming," chanted schoolboys marching in public in support of their female counterparts.

To many Iranian observers, the fast spread of the protests among teenagers was a stark reminder of the gap between the ruling establishment and the so-called Generation Z, which has increasingly taken a distance from the official narrative on hijab and other theocratic values advanced by the clerical leadership.

On another front, university students gathered at campuses nationwide to mount pressure on the Iranian authorities. "This is no longer a protest; this is the start of a revolution," chanted students at Ferdowsi University in the conservative clerical city of Mashhad. During a similar rally at Yazd University, a banner propagating mandatory hijab was pulled down by protesters.

In the capital, Tehran, students in the Faculty of Mechanical Engineering at Khajeh Nasir University of Technology were kept encircled inside their campus by security forces. The standoff occurred only two days after an overnight drama at Sharif University, one of Iran's most prestigious academic centers known for its tough entrance criteria and bright academia. Security forces raided the campus and bundled dozens of hooded students into vans after severely injuring scores who had been chanting against Iran's supreme leader. The students have vowed to boycott all courses until all their arrested classmates are released.

"You believe that windows of a bank and dustbins on the streets are public assets, but you beat up the most respectable and talented university students," wrote well-known journalist Yashar Soltani to the Iranian leadership who have been targeting protesters for setting fire to public property. Soltani accused the authorities of "recycling hatred."

The latest rallies were held less than a day after Iran's supreme leader made his first public reaction to the unrest. Addressing a police academy in Tehran, Khamenei ordered the security apparatus and judiciary to "punish" the protesters, whom he downplayed as a "tiny few."

Echoing the same, hard-line newspaper Kayhan wrote that the bigger majority of Iranians are strict government loyalists, or "revolutionaries," who make up 99% of the population.

Scenes of severe beating of ordinary Iranians continued to go viral, with provincial officials confirming hundreds of arrests on a daily basis. In the latest, the local commander of the IRGC in Gilan province declared that 106 "riot leaders" had been rounded up, claiming that many of those arrested were drug addicts.

According to the Oslo-based Iran Human Rights organization (IHR), the government crackdown has killed 154 protesters. The report has not covered fatalities of the government side, but Iranian media said 17 police and members of the Basij militia have died so far.

In the IHR's breakdown, at least 63 people were killed by live fire from security forces in the southeastern city of Zahedan alone on Sept. 30 when protesters attempted to take over police stations as anger was boiling after the alleged rape of a teenage girl by a local police commander.

The rallies by the schoolchildren are fueling concerns that the unleashed clampdown could claim more fatalities among them. The IHR documented the deaths of at least nine minors before the school rallies. The family of 16-year-old Amir-Hossein Basati from the city of Kermanshah said they learned about his death a week later. And the death of Nika Shakarami, 17, drew massive fury from Iranians as her body was found several days after she disappeared in Tehran.

In her last moments before losing contact, Nika reportedly texted a friend about how she was distressed by security forces chasing her. Iranian officials have denied involvement in her death. Her burial in her hometown Khorramabad saw security forces firing rounds of birdshot at mourners, including at an elderly local who was furiously shouting "a revolution is in the making."