Several deaths were reported in yet another day of turmoil in Iran, with women and men taking to the streets to confront armed riot police. 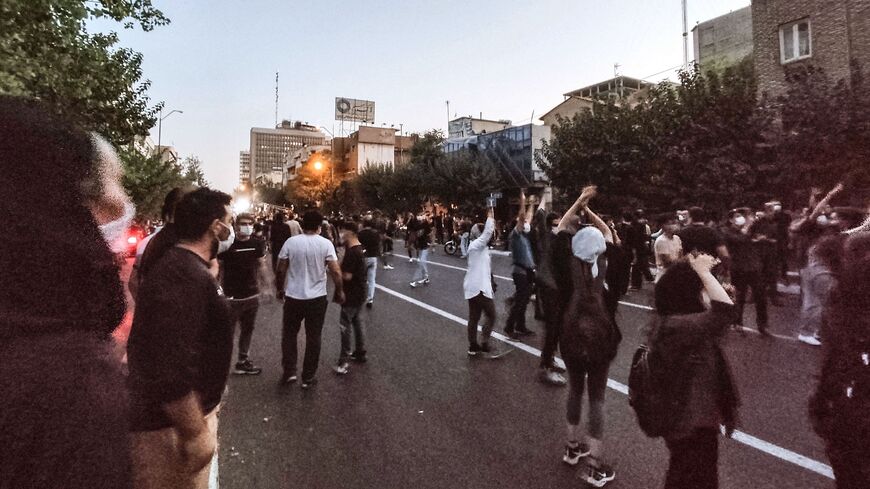 A picture obtained by AFP outside Iran on Sept. 21, 2022, shows Iranian demonstrators taking to the streets of the capital Tehran during a protest for Mahsa Amini, days after she died in police custody. - AFP via Getty Images

Bullets, teargas, scuffles and business strikes brought many Iranian cities to a standstill on Saturday, as the country was rocked with another round of protests that began after the death of Mahsa Amini in hijab police custody last month.

In the capital Tehran, key locations including streets leading to the traditional Grand Bazaar witnessed running battles. Protesters chanted slogans against Supreme Leader Ayatollah Ali Khamenei, before being attacked by riot police. Videos from the same locations also showed demonstrators blocking roads, while a massive cloud of smoke was billowing from what was reported to be a police kiosk set ablaze.

"This is no longer a protest, it is a genuine revolution," some shouted. Others were heard chanting against Khamenei's son Mojtaba, signaling to him that the Islamic Republic will be toppled before his purported expectation of becoming Iran's next supreme leader and succeeding his father comes true.

The Kurdish city of Sanandaj, according to multiple anti-government sources and viral videos, saw the worst violence, as security forces used "live ammunition." In one rally, a driver identified as Dariush Alizadeh was fatally shot after honking in protest. A teenage boy was also reported dead, while some accounts put to five the death toll from today's unrest in the city. Other videos showed angry demonstrators severely beating and chasing away a "senior commander" of hardline Basij militia, who have been actively involved in the ongoing crackdown.

The conservative city of Mashhad was also the venue of many moments of violent crackdown, from a pregnant woman being attacked and forcefully taken away, and another beaten up by batons, to security forces smashing a private vehicle in a residential neighborhood.

Videos from the same city made rounds of a woman shot and lying on the street surrounded by screaming fellow citizens. It remained unclear whether she had lost her life, but to many Iranians the captured moment struck similarities with the tragic and iconic moment of the death of another protest figure, Neda Agha-Soltan during the 2009 post-election protests.

The rallies were held after nationwide calls despite government-imposed internet blackouts that have tremendously impeded the flow of communication. The day was also characterized by strikes in Tehran's normally overcrowded carpet market as well as the Lalehzar business center. Shops in many other provincial capitals were also shut down as an act of civil disobedience.

On the same day, President Ebrahim Raisi was delivering a fiery speech at the women-only Al-Zarha University in Tehran, where he once again linked the unrest to foreign enemies.

Outside the conference hall, videos from the campus showed students removing headscarves and chanting "clerics must get lost," repeating a call for the overthrow of the theocratic establishment.

Raisi praised Iranian students for their "vigilance" in defusing enemy plots. The recent protests have seen many university students and schoolgirls, from the so-called Generation Z, burning their headscarves at campuses, schoolyards and on the streets, jumping on portraits of Iran's supreme leader.

At least 19 minors were among 185 people killed by security forces, according to the Oslo-based Iran Human Rights (IHR), which has been documenting the deaths during three weeks of unrest. Iranian authorities deny killing the protesters, arguing that police forces are carrying "non-lethal weapons."

In the latest from state media programs meant to attribute those deaths to other causes, a woman was brought before cameras on Friday, announcing that her daughter, Sarina Esmailzadeh, died of suicide. Amnesty International has reported that she lost her life due to severe blows of batons to her head.

Many Iranians on social media cast serious doubt on the narrative after digging in videos earlier posted by Sarina Esmailzadeh on her personal channels on YouTube and Telegram, where they found striking differences between the interviewee and another woman who they said was indeed her mother.

In another development, Ali Sharifzadeh, the lawyer of the family of a 14-year-old boy, shared a copy of the boy's official death certificate online, which asserted that he had died of a bullet in his head.

"Do not attribute the death to some 'suicide' or 'underlying health condition'," he warned Iranian authorities sarcastically and pre-emptively.