Mounting deaths in Iran protests as internet blackout drags on

As protests entered a 12th day, the government's deadly crackdown under severe internet disruptions appeared to have failed to soothe the boiling anger. 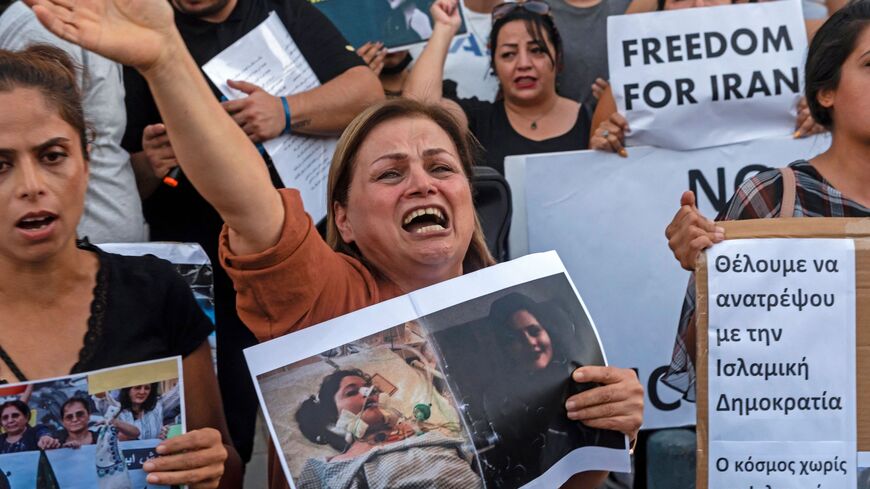 A woman reacts as she takes part in a protest over the death in custody of Mahsa Amini, outside the Iranian Embassy in the Cypriot capital Nicosia on Sept. 27, 2022. - IAKOVOS HATZISTAVROU/AFP via Getty Images

At least 76 people have been killed so far in protests that have rocked Iran after the death of 22-year-old Mahsa Amini while in custody of the hijab-enforcing morality police, the Oslo-based Iran Human Rights (IHR) reported.

The IHR says it has documented the toll based on death certificates, verified family and witness accounts, and other pieces of evidence on the ground. All the victims, according to the report, were killed after direct gunfire from security forces as the protests morphed into wider anti-government protests, with demonstrators calling for the downfall of the Islamic Republic and the departure of its leader, Ayatollah Ali Khamenei.

The IHA noted that the real tally could still be way higher, citing a government-imposed, near-total internet shutdown that has all but blocked the flow of information into the outside world.

The government's official toll stood at 41 and included several police and paramilitary forces. Provincial officials have also offered separate statistics on arrests of hundreds in their own areas. Among those detained are at least 20 journalists, including Niloufar Hamedi, one of the reporters who highlighted Mahsa's case when she slipped into a coma.

In the IHA's tally, there are at least four minors and six women, one of them Hadith Najafai who, according to her family, was shot in the head and chest with six bullets. Families of the deceased, the report added, have been under immense pressure from authorities to bury their children "quietly" and refrain from sharing their stories with foreign media.

The Iranian government has linked the protests to foreign instigation and a campaign by enemies to overthrow the establishment. It has organized two counter rallies, gathering loyalists to condemn "chaos" and "desecration of religious values." Following the state-organized marches, Iran's hard-liners said the "riots" have been wrapped up. Yet police presence was still massive and internet restrictions remained in place, as authorities said the blackout will drag on until the intelligence apparatus decides that the unrest has come to an end.

Despite the deaths, the sweeping arrests, the internet shutdown and the state-organized rallies, social media was fraught with videos showing young women defiantly removing and burning their headscarves before battling armed riot police.

"Women, life, freedom," chanted people in the city of Kermanshah on Sept. 27, as similar videos trickled in from several other cities where gunfire was used to spread the crowds. "Death to the dictator" chants also continued to be heard from rooftops and windows of buildings as a trending form of protest.

In another move to pressure the government, teacher unions announced strikes and students in at least 28 universities joined a nationwide campaign to boycott classes. Calls were also getting louder for businesses to roll down curtains and join the action.

Since the protests broke out, artists, athletes and other celebrities have expressed solidarity with Iranian women, unleashing unprecedented criticism against the government.

Former soccer player Ali Karimi, who is currently based in the UAE, has particularly drawn the anger of Iranian authorities with his explicit support for the protests. Iran's judiciary has vowed to "punish" him over inciting the protests, with some hard-liners demanding the confiscation of his properties in Iran.

Sajjad Esteki, the captain of the Iranian national handball team, bid farewell to his membership "for good," and Mahsa Sadeghi from the women's national taekwondo team did the same "with tears in eyes" and "out of solidarity with all the dear girls of Iran."

"It's either the law that should be eliminated or the one who legislated it," acclaimed film director Mani Haghighi told Iranian authorities in a strongly worded video message. "Because people cannot be eliminated."

And latest in the chain of actresses who have been vocal in recent days was Taraneh Alidoosti, known internationally for her role in the Oscar-winning "The Salesman."

"The whole world is witness to your struggle for justice and freedom," she wrote to Iranian women. "Your legendary resistance is making history, and nothing is more sublime than unity."