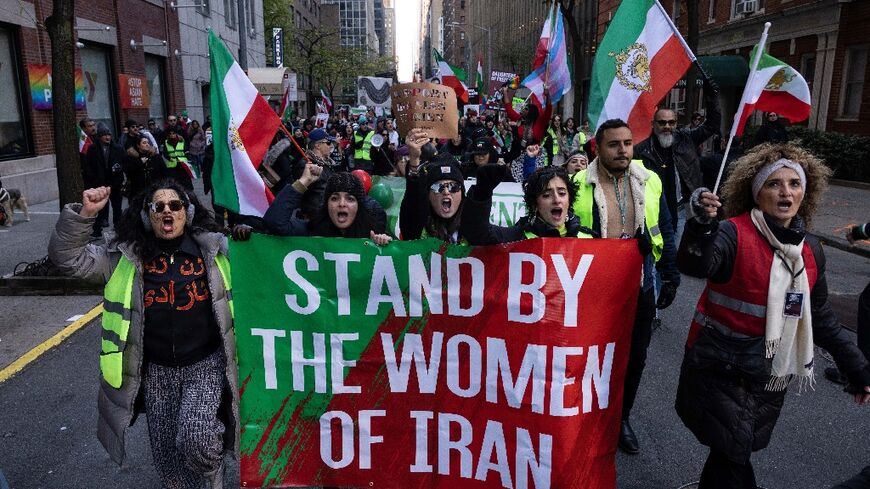 Protesters in New York call on the United Nations to take action against the treatment of women in Iran - Yuki IWAMURA
by Stuart WILLIAMS
November 21, 2022 — Paris (AFP)

The Kurdish-populated provinces of western and northwestern Iran have been hubs of protest since the September death in custody of Kurdish woman Mahsa Amini, 22, after she was arrested by morality police in Tehran.

There have been particularly intense anti-regime demonstrations in several towns in the last few days, rights groups say, largely sparked by the funerals of people said to have been killed by the security forces in previous protests.

The Norway-based Hengaw rights group said Iranian forces shelled overnight Sunday to Monday the cities of Piranshahr, Marivan and Javanroud, posting videos with the sound of live gunfire and what appeared to be the thud of heavy weaponry.

In one harrowing video Hengaw said was from Javanroud, locals were seen struggling to remove a body from the street under a hail of gunfire.

It said 13 people had been killed in the region by the security forces over the previous 24 hours, including seven in Javanroud, four in Piranshahr and two more elsewhere.

Among six people killed by gunfire from the security forces on Sunday was 16-year-old Karwan Ghader Shokri, Hengaw said. Another man was killed when security forces fired on crowds as the teenager's body was being brought to the mosque, it added.

AFP could not immediately verify the toll.

Internet monitor NetBlocks tweeted on Monday that there was "a major disruption" to online services during the new protests, with "mobile internet cut off for many users".

The outage affected "multiple cities," freedom of expression group Article 19 said, warning on Twitter: "The right to life is severely compromised under the darkness of a #internetshutdown."

Hengaw said that with "intense confrontations" between protesters and security forces in Javanroud there was a shortage of blood for the wounded.

The New York-based Center for Human Rights in Iran (CHRI) said a "massacre" was occurring in Javanroud, with "incessant gunshot streams, images of bloody people being carried to safety."

Ramifications of the protests were felt in Qatar where Iran's national team played its first World Cup group match, against England. Iranian players did not sing their national anthem, and instead stood stony-faced, in apparent support for the demonstrations back home.

The latest violence came alongside continued concern over the situation in Mahabad, where rights groups said security forces had sent reinforcements the day before.

"Greatly concerned that Iranian authorities are reportedly escalating violence against protesters, particularly in the city of Mahabad," US Secretary of State Antony Blinken wrote Sunday on Twitter.

Hengaw posted footage it said was of heavily-armed security forces in vehicles headed from the city of Sanandaj towards Mahabad and the nearby town of Bukan. 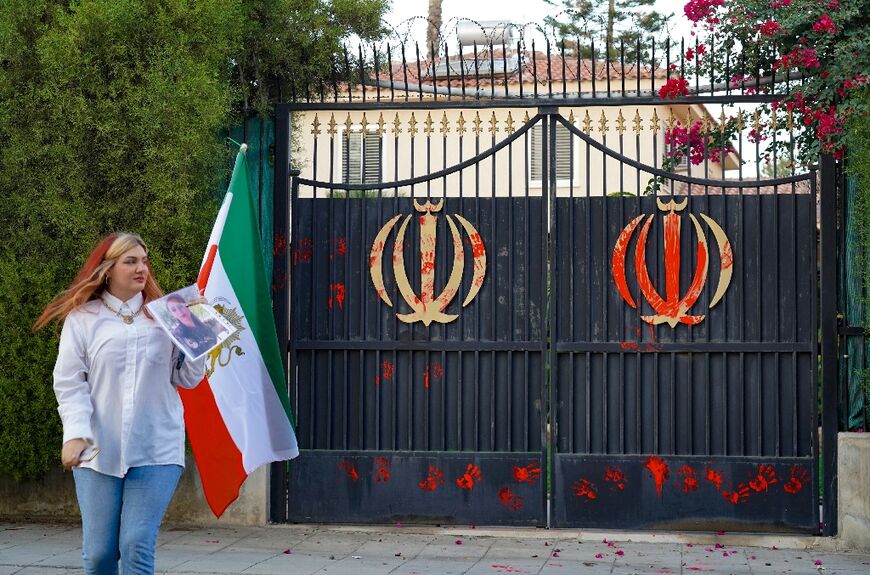 In other footage, the group showed the distraught mother of Shokri, the teen killed Sunday, prostrating herself on his corpse being taken for burial.

"Mother, don't cry. We will take revenge," the mourners chanted in Kurdish, the rights group said.

IHR's director Mahmood Amiry-Moghaddam posted a video showing wounded protesters lying in the street in Javanroud, surrounded by the constant sound of gunfire.

"They are intensifying the violence against defenceless citizens," he wrote on Twitter.

The demonstrations sparked by Amini's death have become the most serious challenge to Iran's clerical regime since the 1979 revolution, and the crackdown by security forces has killed at least 378 people, according to an IHR toll on Saturday.

Analysts have noted that violence by state forces has simply triggered more protests.

Kurds make up one of Iran's most important non-Persian ethnic minority groups and generally adhere to Sunni Islam rather than the country's dominant Shiism.

In the southeastern province of Sistan-Baluchistan on Monday, a policeman was killed and another wounded by "criminals" firing from a car in a village of Zahedan, provincial police chief General Mohammad Ghanbari told Fars news agency.

The latest Iranian strikes came a day after Turkey carried out air raids against outlawed Kurdish militants in Iraqi Kurdistan and northern Syria.