The raid and death threats behind loudspeakers shook the middle-class neighborhood where residents have been chanting anti-government slogans from windows. 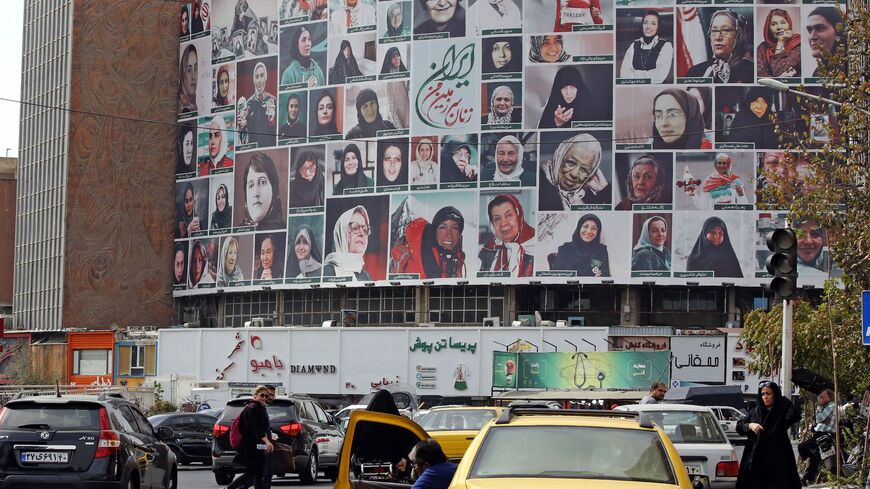 Iranians drive past a huge billboard showing a montage of pictures titled "The women of my land, Iran," featuring Iranian women who are all observing the hijab, on Valiasr Square in Tehran, on Oct. 13, 2022. Iran has been rocked by over a month of women-led protests sparked by the death of Mahsa Amini. - STR/AFP via Getty Images

Riot police and paramilitary hard-line Basij forces raided the middle-class district to shut down protest shouts from windows. Nightly chanting has been trending as an alternative and safer form of protest at a time when government forces are pressing ahead with a lethal crackdown on street demonstrations that began after the death of Mahsa Amini in custody of religious police Sept. 16.

“We swear to God that we will decapitate even our own families if we need to,” announced a man said to be commanding a battalion of police and Basij forces from behind a loudspeaker inside the premises of the complex. The man was also heard boasting about Iranian government forces and how they managed to salvage the Syrian government from a war by “40 adversary countries, who couldn’t do a thing.”

The video was confirmed by Fars news agency affiliated with the Islamic Revolutionary Guard Corps. Fars, however, argued that the commander’s statement was meant to show how determined government forces are to “defend” Iran and its people.

In other videos from the same neighborhood, security forces were repeatedly firing toward windows marked by green laser pointers. Residents posted videos online showing and explaining interior damage to their homes, which they said was caused by bullets and tear gas canisters.

“This is going to be the case every midnight. We will rob you of your rest and quiet. This is just recreation for us,” a riot police commander said from behind a megaphone in Chitgar, another west Tehran district. As the statement ended, a member of the squad shot into the air and the entire group chanted in support of Supreme Leader Ayatollah Ali Khamenei, while defiant anti-government shouts from windows could still be heard in the background.

The viral videos drew anger from many Iranians on social media. To some, the threats were reminiscent of the Islamic State rule, when the militants made similar statements from behind loudspeakers to residents in areas under their control in Syria and Iraq. Others sarcastically challenged the “irony” of the Islamic Republic’s long-standing argument that despite all grievances, Iran has managed to remain “an island of stability” where “at least we have security.”

Iranian police officials have yet to comment on the videos, but in recent days other reports on security forces vandalizing public and private properties have been blamed on individuals wearing “fake police uniforms.”

‘My son died for freedom’

As the unrest continued on Tuesday, hundreds chanted anti-Khamenei slogans at a cemetery in Tehran, where protesters had gathered to mark 40 days after the death of teenage boy Siavash Mahmoudi, who was reportedly killed by security forces.

The Human Rights Activists News Agency (HRANA), which monitors rights violations in Iran, says it has documented the killings of 287 protesters, including 46 children, at the hands of government forces. Iranian authorities have absolved those forces of the deaths, and the government-run paper, Iran, even reported that “no protester” has been killed during over seven weeks of demonstrations.

The latest in the reported killing of teenagers was a 16-year-old boy, identified as Komar Daroftadeh, whose body was buried at a graveyard near the northwestern city of Piranshahr. Kurdish rights organization Hengaw reported that Komar succumbed to injuries he sustained from “close-range” firing by security forces.

“I’m proud that he died for freedom and his land,” declared his weeping father among mourners at the cemetery.

Over 14,000 people have been arrested during protests that were held in at least 133 cities, according to HRANA’s estimates.

The defendants are facing an array of charges including “waging war on God” through “conspiracy” against the Islamic Republic, “arson, destruction of property and murder.”

Given Iran’s record in previous unrest, rights activists have expressed alarm that a wave of death penalties could be looming, as Iranian hard-liners have promised that punishment will be “the harshest” and the trials “should serve as a lesson.”