As Egypt hosts the UN climate conference COP27, Cairo is focusing particularly on the harm climate change could do to local and international peace and security. 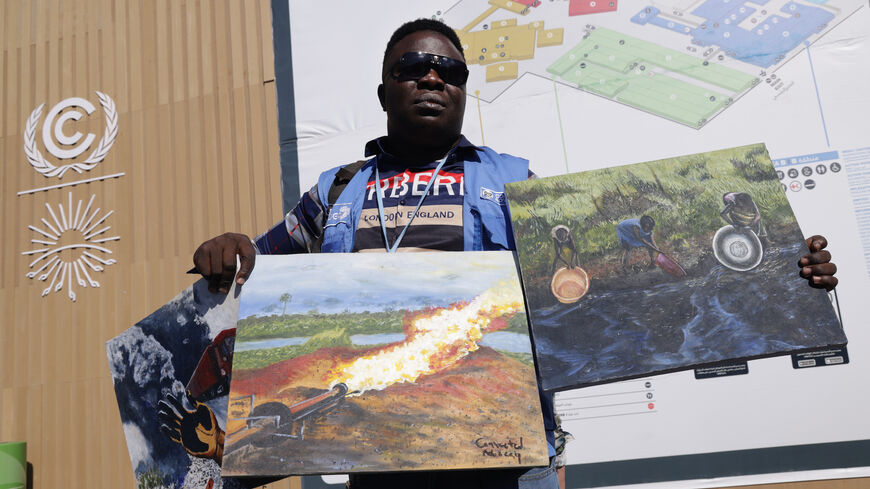 A man protesting fossil fuel exploitation holds paintings of oil spills and fires in his home region in the Niger Delta during the COP27 climate conference on Nov. 10, 2022, in Sharm El Sheikh, Egypt. - Sean Gallup/Getty Images

CAIRO — Egypt is planning to launch an initiative called “Climate Responses and Sustaining Peace” Nov. 12 during the UN climate summit COP27 in the Egyptian resort city of Sharm el-Sheikh.

The initiative consists of a series of programs to address the security dimensions of climate change and potential risks that may undermine efforts to achieve peace and social stability.

The Egyptian Ministry of Foreign Affairs and the Cairo International Center for Conflict Resolution, Peacekeeping and Peacebuilding are sponsoring several discussions during COP27 focusing on the security and political dimensions of climate change. These discussions enhancing the sustainability of peace and security in light of the climate crisis, permanent solutions to mass displacement and financing in fragile environments and conflict areas.

Ayman Tharwat, deputy director of the Egyptian Foreign Ministry's climate, environment and sustainable development department, said in a September press statement, “The initiative will be our first chance to address the security and peace dimensions in climate change conferences.”

The Police Research Center affiliated with the Ministry of Interior held workshops in Cairo to address the security implications of climate change and the role of the Egyptian security apparatus in addressing practices harmful to the environment.

Hussein Abaza, an adviser on sustainable development at the Ministry of Environment, told Al-Monitor, “The Egyptian government is aware of the impact of climate change on stability and national security and of the related social and economic problems such as water scarcity and increased poverty and unemployment rates.”

He said, “The Egyptian police have an important role in addressing the causes of climate change by enforcing the state's laws that forbid activities that increase emissions and pollutants, encroachments on agricultural land, green spaces and forests, as well as slums.”

Several departments of the Ministry of Interior are involved in addressing environmental crimes such as poaching, controlling polluting activities in the agricultural sector and in the Nile and preventing trash burning.

Maj. Gen. Mohamed Abdel-Wahed, who now writes on national security affairs, told Al-Monitor that there are two schools of thought on the links between climate change and security issues. One focuses on governments possibly using climate issues for political purposes, and the other sees climate change itself as a security issue. He gave peacekeeping forces' presence in areas of Africa already affected by climate change as example.

He added, “Egypt is taking the path of climate diplomacy to mitigate the negative effects on peace and societal security at the international level by strengthening multilateral policies and overall security" while also pushing for the effects of climate change to be addressed on the local level.

As it hosts COP27, Egypt is using its position to link security issues with climate change and facilitate international discussions on the security effects of climate change despite the UN Security Council's failure to adopt the draft resolution that Ireland and Niger put forward in December 2021 calling for specific actions on climate change and security.