Cooperation with Palestinian Authority behind return of abducted Israeli body

Israel's leadership, the Palestinian Authority, the Americans, the UN and even Islamic Jihad contributed to the return to Israel of a body abducted in a West Bank hospital. 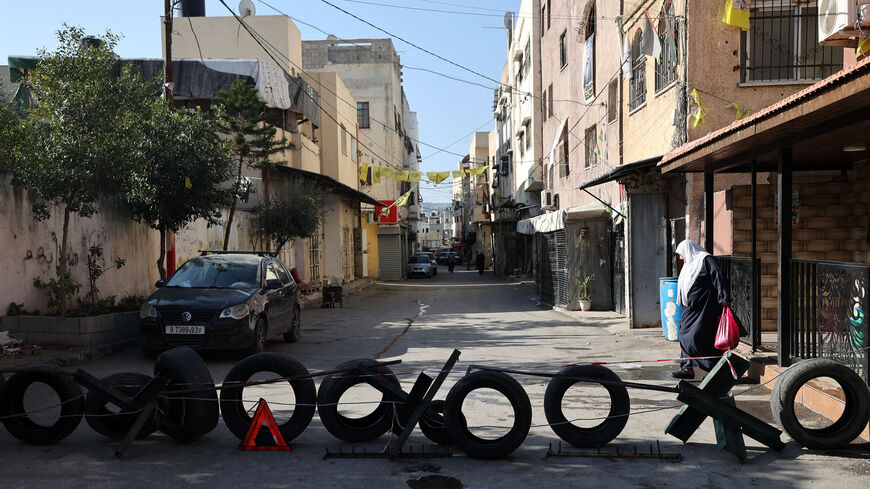 A barricade set up by Palestinians blocks a street in case of an Israeli army raid, Jenin, West Bank, Nov. 23, 2022. - Jaafar Ashtiyeh/AFP via Getty Images

TEL AVIV — Armed Palestinians stormed a hospital in the West Bank town of Jenin Nov. 22 and kidnapped an Israeli teenager on life support following a traffic accident in the area. The abduction in Jenin, a hotbed of Israeli-Palestinian clashes in recent months, nearly deteriorated into what one unnamed senior military official described as a “blood bath” and a full-scale Palestinian uprising (intifada).

The gunmen who kidnapped Tiran Fero, 18, a member of Israel’s Druze community, came to their senses in the pre-dawn hours of Nov. 24, after receiving an Israeli ultimatum that unless the body was returned troops would storm the town, and revealed the location of the body. Palestinian mediators rushed to the site, loaded the body into a Red Crescent ambulance and drove it to the Jenin offices of the Palestinian intelligence service, from where it was taken to the Salem crossing between the territory controlled by the Palestinian Authority (PA) and Israel. There it was handed over to Israel’s military coordinator with the PA, Maj. Gen. Ghasan Alyan, himself a member of Israel’s 150,000-member Druze community. The body’s return elicited a huge sigh of relief. The blood bath had been postponed, for now.

“This affair proves that it is too soon to write off the PA,” a senior Israeli military source told Al-Monitor on condition of anonymity, adding that Palestinian President Mahmoud Abbas gave a direct order to his people to do all in their power to obtain the body’s return. “Ultimately, we were in contact with the PA and they came through, big time,” the source said.

What began as a local traffic accident ballooned into a major international incident, when Ferro and a Druze friend, both 12th graders from the Israeli town of Dalyat al-Carmel crossed into Jenin to buy a sound system for their new car and crashed the vehicle. Ferro’s friend was taken to the Salem crossing and flown from there to a nearby Israeli hospital. Ferro, whose condition was more severe, was taken to a nearby Palestinian hospital and placed on life support. His father and other family members crossed into Jenin and rushed to his side.

Jenin has been the site of almost daily clashes between armed militants and Israeli forces who raid the town to capture suspected terrorists. Jewish Israelis steer clear of Jenin, but Israeli citizens of Arab origin go there to shop, dine and visit relatives and friends. The business they bring is an important source of income for the town’s merchants. The Druze, unlike most of Israel’s 21% Arab minority, are not as welcome in the PA, given their decades-old affiliation with the Israeli army and police in which many of them serve. Ferro, however, was undeterred, and the adventure cost him his life.

Rumors that an Israeli teen was hospitalized in Jenin spread quickly to a group of armed militants in the town’s refugee camp. They were convinced he was an Israeli soldier or an undercover operative and therefore a valuable hostage. Some 20 masked men brandishing guns stormed the hospital, yanked out the respirator tube, and escaped with his body. Palestinian authorities said Ferro was already dead at that point. His father Hussam Ferro, who was near his bed, said his son was still alive.

In the ensuing 35 hours, the saga with its explosive potential engaged a host of actors, including US and United Nations officials, senior PA officials, influential local figures in Jenin and even the leader of Islamic Jihad in Damascus. It contained all the elements of a fast-paced action film: a body, a safe house, alleyways in one of the Middle East’s most dangerous kasbahs, high anxiety, escalating threats — and a relatively “happy” end, with Ferro’s family able to give him a dignified burial near his home.

Israel had initially thought Islamic Jihad might be responsible for the abduction, but soon realized that the kidnappers were not members of any terrorist organization but rather local Palestinians — some of whom sought to avenge the death, wounding or arrest of relatives in clashes with Israeli forces.

Outgoing Prime Minister Yair Lapid and Defense Minister Benny Gantz immediately decided to treat the affair as a humanitarian issue and avoided inflammatory public statements. The contacts with the PA were conducted by Alyan, who found himself in an uncomfortable situation as a respected member of the Druze sect whose members were planning to enter Jenin and take their revenge on the people they deemed responsible for the abduction. His job was to restrain them while conducting official contacts for the boy’s return.

Meanwhile, Israel was mobilizing reinforcements. UN envoy to the Middle East Tor Wennesland left immediately for Jenin. Palestinian intelligence chief Majed Faraj, who was initially reluctant to intervene, also came through and joined the negotiations. US security coordinator, Gen. Mike Penzel, also brought to bear US levers of influence on the PA. Palestinian Minister Hussein a-Sheikh, whom Israel considers the most effective liaison with the PA, and Abbas himself were also closely involved.

The most interesting move involved Ziad Nahala, head of Islamic Jihad who lives in Damascus. According to senior diplomatic sources, Nahala was brought on board by the UN envoy. To everyone’s surprise, Nahala made clear that his group was not involved in the kidnapping and urged those responsible to put a quick end to the saga.

At the same time, Alyan was negotiating with local mediators in Jenin who were at the safe house with the kidnappers. They almost gave in twice, only to change their minds at the last minute and refuse to release the body. As the hours dragged on, the Israeli military was making contingency plans for a widescale raid of Jenin to locate and free Ferro. Gantz promised his father that his son would be brought back, either way.

The kidnappers, eventually realizing that they had bitten off more than they could chew, sent the mediators the whereabouts of the safehouse at 3:30 a.m., and severed contact. The Druze, who were already planning to kidnap Palestinians and hold them hostage, called off their protests. Lapid, who updated Prime Minister-designate Benjamin Netanyahu on the affair during a lengthy phone call Nov. 24, promised that he would not leave the case unresolved prior to leaving office in the coming days. He kept his promise.