Residents of Maghar would have preferred Interior Minister Ayelet Shaked to announce it as a new Arab city, and not as the first Druze city in Israel. 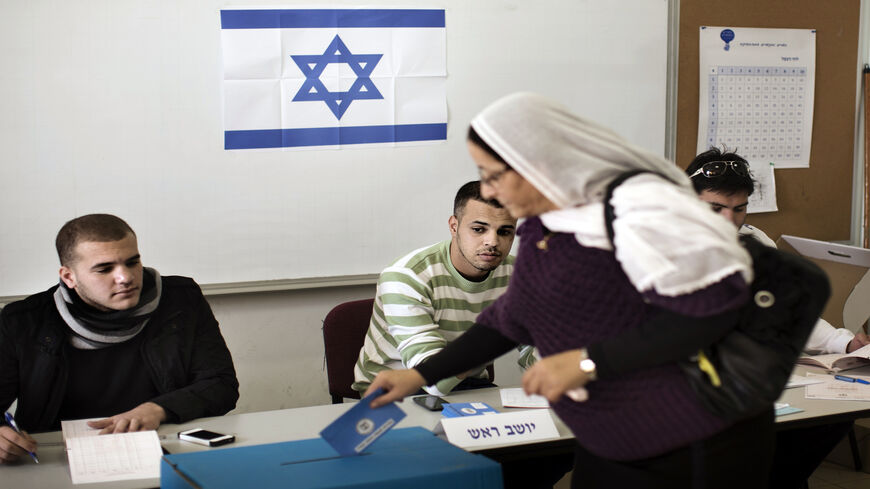 A Druze woman casts her ballot in the northern village of Maghar, Israel, Jan. 22, 2013. - Marco Longari/AFP via Getty Images

Meeting with the Forum of Leaders of Druze and Circassian Local Authorities Oct. 26, Interior Minister Ayelet Shaked surprised everyone by announcing that she was changing the municipal status of the Maghar local council to municipality. This turned Maghar into the first — and to date, the only — Druze city in the entire country. In her statement, Shaked noted that this development is further proof of the “courageous and strong ties between the Druze and Jewish peoples.”

The new mayor of the city, Fareed Ghanem, posted to Facebook that he was as surprised as anyone by the minister’s decision, saying, “Minister Ayelet Shaked surprised me. The plan was to have her visit Maghar next month to declare it a city in an official ceremony. We do not intend to give up on that ceremony, because it is our right to celebrate and share the joy with the local and national leadership.”

One of Maghar’s most prominent citizens is the chairman of the Ra’am party and member of the coalition, Mansour Abbas. He also took to Facebook to congratulate the town on this desicion: “Congratulations to my town of Maghar, which, as of today, is the city of Maghar.”

Other prominent residents of the city are Azzam Azzam, who spent eight years in an Egyptian prison on charges of spying for Israel, only to be released in 2004, and former Knesset member Jabar Asaqla, who represented the Hadash Knesset faction on the Arab Joint List.

Maghar is an Arab town located in the north of the country, on the border between the Upper and Lower Galilee. It has a population of 24,000, most of them Druze (57%), with the remainder almost equally divided between Muslims (21.4%) and Christians (21.1%). According to the current plans, the population is expected to grow to 30,000 in the next few years.

Reportedly, there were several considerations behind the decision for changing Maghar’s status, including the town’s population size and density and employment trends among the local population. Once a mostly agricultural locality, most people now work in commerce, industry and white-collar jobs.

The promotion to municipality should make it easier to move forward with various planning, economic and interagency processes. In practical terms, it means that the mayor and the municipality will have greater authority on local affairs. They will be exempt from receiving permission from the director general of the Interior Ministry for the transfer of land rights, issuing tenders for future projects, appointing a municipal attorney as a statutory employee of the municipality and a municipal comptroller as a full-time position, and so on.

One thing that stood out in the minister’s announcement was her emphasis that this is a “Druze city,” not an Arab city. She said so explicitly: “I am happy and excited to announce the first Druze city in Israel.” Did she intend to distinguish between Arabs and Druze, so as to avoid being portrayed as having created an Arab city during her tenure? As a reminder, the Druze are Arabs. But contrary to Syria or Lebanon, Israel makes that (religious) distinction on several official levels.

Whatever her intentions at the Oct. 26 meeting, Shaked had shown in the past she does not want to be politically associated with promoting Arab towns. For instance, there was a tweet she wrote Oct. 27, responding to the leader of the opposition Benjamin Netanyahu. Netanyahu had tweeted that Shaked canceled 45 million Israeli shekels ($14.3 million) in debt for the city of Taibeh, then added, “Mansour Abbas is counting the money in the stairs.” Evidently, Netanyahu was seeking to harm Shaked vis-a-vis the right-wing camp. Shaked shot back that this was an economic program to help the town of Taibeh, signed in 2014, when Netanyahu was prime minister. With this, she disassociated herself from helping Taibeh.

All in all, Shaked’s insistence on calling Maghar a Druze city received mixed reactions among the Arab population. On the one hand, they were pleased about the development, but on the other hand, for many of them it was difficult to accept this division of the Arab society by religious affiliation. So, for instance, Attorney Amjad Shoufany from the neighboring village of Eilabun tweeted, “I’ll never understand the importance of emphasizing the tribal and communal divisions among the non-Jewish population, but it was important enough for Shaked that she dismissed the other half of Maghar’s population, who are Muslims and Christians.”

Former Knesset member Jabar Asaqla, a member of the Druze community, who was born and raised in Maghar, talked to Al-Monitor about the promotion of Maghar to city, saying, “This is a positive step. I hope it is accompanied with investments in developing the town, instead of being limited to statements to the media and idle talk. We must strive for less action and more talk. It is important to remember that the request to recognize Maghar as a city was submitted in 2015. It is therefore fitting that it be promoted to city.”

In response to Shaked calling this a Druze city, he said, “It is a mixed city, with a population of Druze, Muslims and Christians. It is a city like any other Arab city like Sakhnin, Arraba and others. As such, we reject Shaked’s claim that this is a Druze and not an Arab city, but that is all part of Israel’s policy of divide and conquer, when dealing with the Arab population.”

Malek Bader, former head of the Forum of Leaders of Druze and Circassian Local Authorities, told Al-Monitor, “I welcome Maghar being declared a city, even if the declaration should have been made differently — in a more respectable manner. At the same time, the declaration itself, without any plans to develop the town in the future so that it qualifies as a city, and to grant it budgets accordingly, is meaningless. I have serious reservations about the emphasis on it as 'the first Druze city,' because almost 50% of the population is not Druze, and because there never was a competition over being ‘the first Druze’ anything.”