Three Israeli ministers are using the opportunity of the 2020 Dubai Expo to visit the country and meet with their Emirati counterparts. 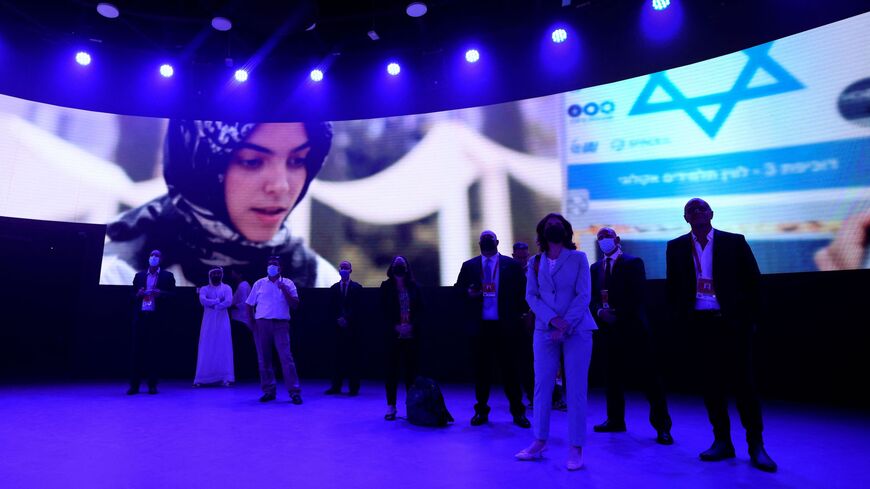 The Israeli pavilion at the 2020 Dubai Expo is scheduled to open on Oct. 7. But even before opening, it has become an important platform from strengthening diplomatic ties between the two countries. Three Israeli ministers either have visited or will visit the United Arab Emirates in relation to the exposition. Environmental Protection Minister Tamar Zandberg and Interior Minister Ayelet Shaked have already concluded their trips and Tourism Minister Yoel Razvozov will inaugurate the Israeli pavilion in Dubai on Thursday.

The two Israeli ministers wasted no time in the Emirates. Zandberg arrived on Oct. 4 to meet with Emirati Climate Change and Environment Minister Mariam Almheiri to discuss cooperation on environmental projects. She said after the meeting, “In July we signed in Israel a series of understandings on the environment and climate, and today we met at the Expo Dubai for our first work meeting in order to begin breaking it down into projects. We have many shared challenges and many shared opportunities.” In a tweet, Zandberg referred to Almheiri as "my friend."

Zandberg also met with Shaikha Salem Al Dhaheri, the director of the Abu Dhabi Environment Agency. The two women discussed recycling, single-use plastics, air quality, biodiversity and many other topics. Zandberg said at the meeting, “Israel is located in a unique geographic location and shares many challenges with Gulf nations. The climate crisis threatens our national security as well as the rest of the world. We must prepare for it and also find solutions including moving to a carbon-free economy, while still supporting weaker populations.” She added, “Israel has an important role to play in the global efforts to prepare for and fight the climate crisis. Regional cooperation is key.”

Zandberg told Al-Monitor today, "Israel shares many challenges with the Gulf countries and we have great experience in developing innovative solutions to address the challenges of living in a desert environment. I look forward to cooperating with the UAE from climate mitigation and adaptation to circular economy solutions, marine environment protection and biodiversity conservation." The minister added that cooperation will be helpful not only for the environment, human health and quality of life, but also for the two nations' economies, saying, "Peace brings an opportunity to strengthen the environment, the society and the economy of the two countries and to work together for a common future."

The interior minister's trip to the Emirates was even more interesting, considering Shaked’s position as a secular female minister in the mixed secular-religious party Yamina and with strong right-wing, anti-Palestinian convictions. Over the years, Shaked has clashed on several occasions with Arab legislators, particularly those of the Islamic party Ra’am. But now that she sits in a coalition with Ra’am, she is no longer making these kinds of remarks. During the coalition negotiations, she even met personally with Ra’am chief Mansour Abbas.

Shaked visited Abu Dhabi and Dubai almost like a head of state. Judging by the ceremonial welcome, her hosts consider her one of Israel’s top politicians. Upon arrival, she visited the Wahat Al Karama memorial site for Emirati soldiers. She laid a wreath at the Martyr’ Monument there and then toured the complex, which is made up of 31 panels supported by one another in a symbol of Emirati solidarity. Her Emirati counterpart, Interior Minister and Deputy Prime Minister Sheikh Saif bin Zayed Al Nahyan, accompanied her and explained to her the different parts of the monument.

Later on, the two ministers discussed the visa-free travel between the countries that will go into effect on Oct. 10 after delays due to the coronavirus pandemic. Shaked said that the Emirates “is an advanced and moderate nation and Israel has much to learn from it.” She also said that Nahyan offered her suggestions on dealing with challenges concerning Israel’s Bedouin population.

The two ministers also discussed interfaith cooperation. Shaked’s ministry controls the appointment of Muslim imams in Arab localities and employs about 300 imams and muezzins at mosques across the country. According to Israel Hayom, Shaked and Nahyan spoke about “a number of initiatives to enhance cooperation between the two countries, including interfaith projects in the interest of strengthening religious communities in the two countries and promoting interfaith dialogue.” Shaked was said to suggest “strengthening the training and education of Muslim imams, who are citizens of Israel, in the Emirates on religious moderation, tolerance and combating violence.”

Shaked invited Nahyan to visit Israel to participate in a “joint interfaith prayer” to be held next month. She also visited the Sheikh Zayed Mosque in Abu Dhabi. In a photo posted on social media, Shaked is seen dressed modestly in a headscarf during her visit to the mosque — no everyday image.